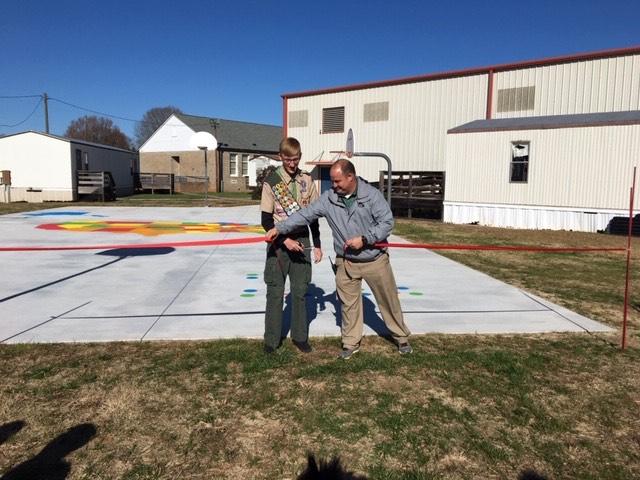 Spencer, son of Stephen and April Chandler of Salisbury, put together a plan to completely rip up the old court, pour a new concrete court, refurbish the goals and paint the court with various playground games and a map of the United States.

After developing the plan, Spencer went before the school’s administration and the Scouting Board of Review Committee to gain approval for the project.

A major part of Chandler’s leadership responsibilities were to raise money and obtain in-kind contributions to cover the project. The project had an estimated cost of more than $12,000. Chandler credited Darrell Shell of Carolina Site Works for making it possible to get the project off the ground.

Shell volunteered his company to dig up and dispose of the old asphalt court free of charge.

That left $4,000 for Chandler to raise for the balance of the project. He began soliciting contributions from local businesses and the Bostian Elementary PTA. After raising all the funds for the project, and the demolition and pouring of concrete was complete, Chandler recruited boys and adults in Troop 379 along with Bostian Elementary Art Teacher Crystle Lineberger to help paint the court with playground games and a large learning map of the U.S. Finally the court was finished and the 350 students at the school could use it to play basketball and other games on a new court.

At the dedication, Spencer thanked the sponsors Lisa Sigmon, the now retired principal of Bostian Elementary who helped him with initial project approval, current Principal Cory Stirewalt, Scoutmaster Justin Fisher, his parents, and all the volunteers who helped complete the project.

The dedication ended with a ribbon cutting and the Bostian Elementary students and teachers all lined up to high five Chandler for his leadership and efforts to complete the project.

During the ceremony, Spencer said he learned a lot about leadership in Scouts, particularly during this project, Completing the project was very challenging, he could not have done it without the support of many volunteers and contributors at the school, in the community and in the troop.

Chandler will receive his Eagle Scout Award at a special ceremony at Shiloh Methodist Church in Granite Quarry in January.