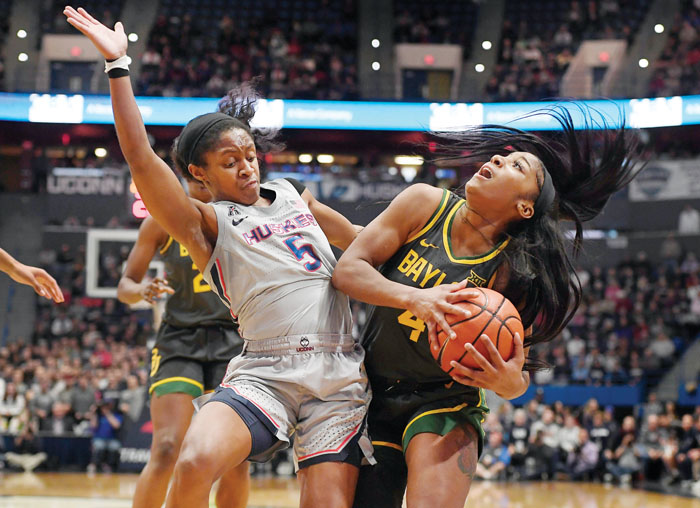 UConn fell one victory short of tying its own NCAA record of 99 in a row at home. The Huskies previous loss at home came in the Big East final against Notre Dame on March 12, 2013.

Baylor (12-1) led by three going into the fourth quarter and neither team could get much going on offense in the first few minutes of the final period. The Huskies cut the deficit to one on Christyn Williams’ jumper with 6:36 left. Then the defending national champions took over.

The Lady Bears responded with the next 15 points to put the game away. The run started on a layup by Lauren Cox and two baskets by Nalyssa Smith. Smith finished with 20 points and 12 rebounds.

UConn (12-1) didn’t score a basket after Williams’ jumper until Crystal Dangerfield hit a 3-pointer in the final minute and the game decided.

This was UConn’s first real test of the season. Since 2007, the Huskies (12-1) have played at least one team ranked in the top five before the New Year. This season the only ranked opponent before Thursday that UConn has faced was then-No. 16 DePaul.

While UConn hadn’t been tested this season until this game, Baylor suffered its only loss of the season in the Paradise Jam Tournament over Thanksgiving to then-No. 5 South Carolina.

Baylor was up 33-25 late in the second quarter when UConn coach Geno Auriemma called a timeout. The Huskies responded by scoring the next nine points before Baylor hit the last basket before the half to take a 35-34 lead into the break.

The Lady Bears extended that lead to 55-52 after three quarters. The Huskies had a chance to make it a one-point game, but Walker missed a layup with a few seconds left. Auriemma slammed the scorers table with both hands in disgust after she missed it.

The Lady Bears also beat UConn last season when the Huskies were ranked No. 1. The two victories are Baylor’s only wins over a No. 1 team. … These two teams are 1-2 in victories since 2010-11, with UConn going 339-18 and Baylor 324-24. … UConn will be ranked in the poll this upcoming Monday for the 500th consecutive week.

Taylor Koenen added 14 points and 11 rebounds for the Tar Heels, who battled back from 12 down midway through the third quarter before making a surprising rally against one of the nation’s last four unbeaten teams. The Tar Heels (12-3, 3-1 Atlantic Coast Conference) pushed ahead for good on Madinah Muhammad’s free throws with 8:14 left, then repeatedly came up with tough baskets to gradually tighten their grip on the game down the stretch.

It came less than a year after the Tar Heels won in Raleigh against a Wolfpack team ranked No. 7 and standing as the nation’s last unbeaten Division I team on the men’s or women’s side at 21-0. This time, it gave first-year coach Courtney Banghart her first win in the longtime series between nearby rivals.

Aislinn Konig scored 24 points for the Wolfpack (14-1, 3-1), who went more than 10 minutes without a basket after taking a 46-34 lead with 5:10 left in the third quarter. N.C. State shot just 7 of 30 (19%) after halftime, while sophomore center Elissa Cunane – the reigning ACC player of the week – never got going against Janelle Bailey inside and finished with a season-low eight points on 3-for-11 shooting.

N.C. State: The Wolfpack arrived alongside No. 1 Connecticut, No. 3 Oregon State and No. 8 UCLA as the nation’s remaining unbeaten teams. But after a hot start, N.C. State went completely cold and missed 12 straight shots as UNC climbed back in it. Cunane, who had 13 rebounds, came in averaging 17.5 points and 10.4 rebounds with 54 points combined in the past two games but never was much of a factor with the Wolfpack relying on the outside shot (12 of 29 from 3).

UNC: The Tar Heels had won their first two league games under Banghart before losing last weekend at Virginia Tech. This one was huge, with the Tar Heels shooting 45% after halftime and hanging in when the Wolfpack pushed ahead by double figures.

UNC: The Tar Heels visit No. 11 Florida State on Sunday.