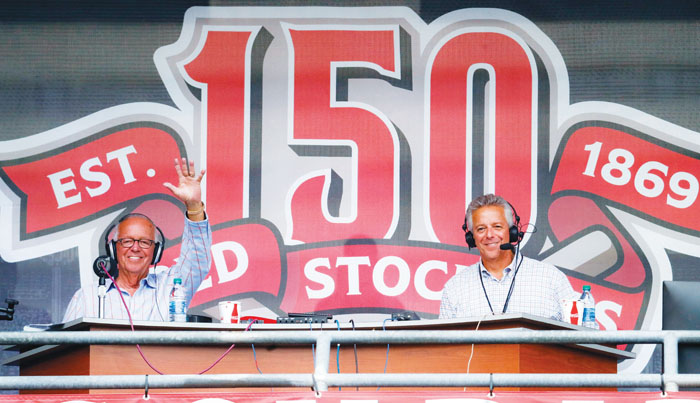 Cincinnati Reds radio announcer Marty Brennaman, left, waves next to his son Thom, in a special outside booth before the Reds' baseball game against the Milwaukee Brewers, Wednesday, Sept. 25, 2019, in Cincinnati. (AP Photo/John Minchillo)

SALISBURY — He made his nervous debut in a cramped North Rowan High press box, trying to describe a football game, but Marty Brennaman rose to become one of the all-time greats in baseball broadcasting.

Brennaman, voice of the Cincinnati Reds for 46 seasons, called his final game for the team on September 26.

Brennaman is a member of the NSSA, Virginia Sports and National Radio halls of fame and will be inducted into the Cincinnati Reds Hall Of Fame on April 26, but he hasn’t forgotten early days in Salisbury when he was still learning his craft.

“It’s unheard of for anyone to be in one place, with one organization, for as long as Marty was,” Catawba head coach Jim Gantt said. “He’s a great speaker. He’s hilarious. He’s got great stories about the Reds, especially from those ‘Big Red Machine’ days. I never get tired of hearing Pete Rose stories or Johnny Bench stories.”

After Brennaman graduated from the University of North Carolina in 1965, his first job was actually with High Point’s television station, WGHP. Mostly he did news reporting, but he was also the backup for sports anchor Charlie Harville.

He spent only six months in High Point.

Bill “Mouth of the South” Currie, UNC’s play-by-play man, recommended Brennaman, who had assisted Currie during his student days, for the job opening at Salisbury radio station WSTP that launched Brennaman’s play-by-play career. He was hired by Tom Harrell. He sold ads by day and broadcast games — basketball, basketball and football  — by night.

Brennaman recalls that he welcomed his listening audience for his football debut from North Rowan with the immortal words, “Well, it’s a crowd full of people.”

But he got smoother after that. He made his errors, learned from those mistakes, developed his unique style. He spent five years in Salisbury, with his most memorable call being Randy Benson’s dramatic homer that decided the 1969 American Legion state championship.

“I wasn’t good when I started, but I was able to refine my skills and grow at my own pace,” Brennaman said. “Looking back, I cherish those five years I was in Salisbury. You can’t fall into a better situation than I did. There was absolutely no pressure. I wasn’t getting paid enough for there to be any pressure.”

Brennaman’s work in Salisbury led to him moving on to Virginia as the play-by-play man for the Virginia Squires of the American Basketball Association. He would also do baseball broadcasts for the Triple A Tidewater Tides and handled football and basketball for Virginia Tech.

Brennaman always believed his best sport was basketball, but when the Reds sought a play-by-play replacement for Al Michaels, who was moving over to the San Francisco Giants, Brennaman got the job — out of 221 applicants. He was as surprised as anyone.

He was an unknown in Cincinnati when he was hired in 1974 — but the rest is history. Brennaman’s catch-phrase — “This one belongs to the Reds” — enjoyed an amazingly long shelf life. 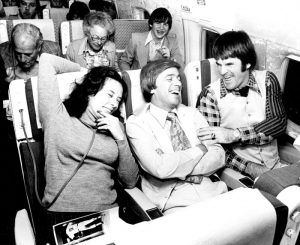 In this 1976 photo, Marty Brennaman, center, sits with Pete Rose and Rose’s then-wife Karolyn on a flight from New York City to Cincinnati after the Cincinnati Reds swept the New York Yankees in the 1976 World Series. Brennaman, the 77-year-old broadcaster known for his pull-no-punch descriptions and his “this one belongs to the Reds” sign-off, settled in Tuesday, Sept. 24, 2019, for his last three days in the booth. After 46 years, Brennaman retired. (Mark Treitel/The Cincinnati Enquirer via AP)

In his first game with the Reds, the opponent was the Atlanta Braves, and he called Hank Aaron’s 714th home run to tie Babe Ruth. That blast came off Reds hurler Jack Billingham, who had played minor league ball in Salisbury.

Still, he’s never gotten to big or too famous or too busy. He’s always been happy to come back to Salisbury and do what he can to help Catawba.

“People ask me what I’d change about my career and I wouldn’t change a thing,” Brennaman said. “Salisbury prepared me. Everything that’s happened for me happened because of Salisbury. It’s a special place, and I’ll never forget where I came from.”

Brennaman’s return helped the latest “First Pitch Dinner” in the Peeler Crystal Lounge sell out at $100 per ticket.

All proceeds will support 2020 Catawba baseball.

“Sandy Moore came up with the idea a few years, and this dinner is our primary fundraiser,” Gantt said. “We’ve gotten tremendous support from the community. We couldn’t do what we do as far as traveling without this event. It helps our guys eat a little better and stay in a little better hotels. Money is always going to be an issue for a small college, so this dinner has been a lifeline for us.”

Former Catawba players who now are in the pro ranks usually return for the event.

“Brian is one of us, and he always coached for all the right reasons,” Gantt said. “We’re going to honor his effort.”