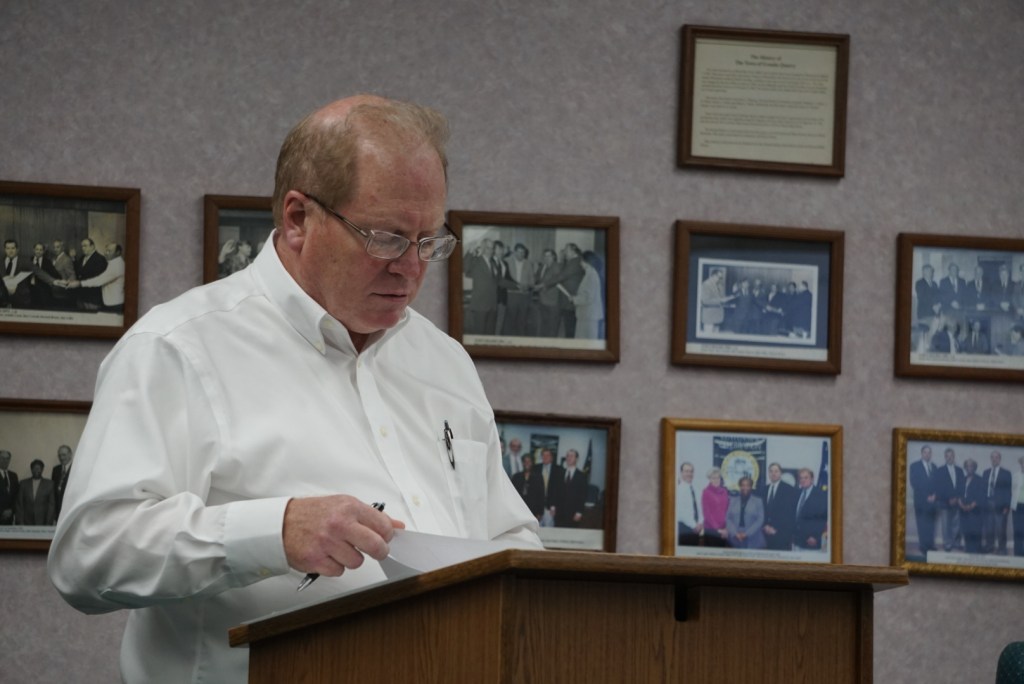 Carl Blankenship // Salisbury Post Granite Quarry Town Planner Steve Blount speaking at the meeting. Blount presented about the update's to the town's Comprehensive Plan and a change to ordinances regarding the responsibility for maintenance of stormwater management systems in the town.

GRANITE QUARRY – The Board of Aldermen on Monday night approved revisions to its comprehensive plan.

Revision work on the plan began in Nov. of 2018 and continued for six months with “valuable information and insights into the growth patterns and special issues facing the town” provided to the town planner via the planning board. The revised plan was finished in June, with a public workshop held in October. The original plan was adopted in 2000.

The plan was originally supposed to be revised every five years, but this update is the first.

The revised plan looks at special issues for the town, noting expansion of industrial areas, utilities, stormwater management and so on. The draft plan was posted online for public inspection before the Granite Quarry Planning Board sent the final product sent to the Board of Aldermen.

A public hearing on the changes was held at the meeting on Monday night, with no comments from the public. The revisions to the plan were then approved by the Board of Aldermen, with a request from the Planning Board to review the plan annually and perform updates to the plan every five years at least.

Town Planner Steve Blount initially encouraged the board to revisit the plan in 2017, as the Uniform Development Ordinance has to be consistent with the town’s comprehensive plan, which examines all aspects of community life.

• The town held a public hearing regarding the town’s stormwater management systems.

Blount pointed out in a presentation the former stormwater management ordinance stated, “Storm drainage plans shall be considered on an individual basis depending up on the situation within a given development.”

Blount went on to show images in the town of what appear to be either aging or abandoned detention ponds and suggested updating the language in the UDO to include sections outlining responsibilities of different parties with regards to stormwater management systems whether they are on private, town or NCDOT property.

There were no comments from the public during the hearing.

• An ordinance was passed resulting in a change about how electronic gaming operations can be listed and changing the zoning requirements in which the operations are allowed from conditional use with special restrictions to heavy industry zoning classifications in the UDO.