“The year of seeing clearly”: ApSeed looks toward further expansion in 2020 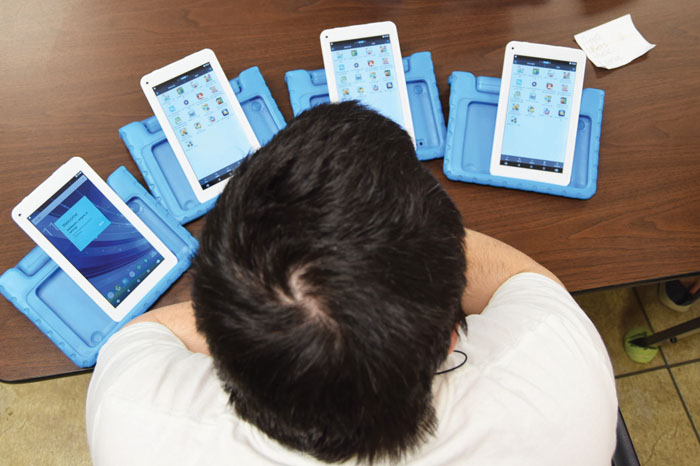 Rebecca Rider/SALISBURY POST File Photo Mackenzie Williams, of Rowan Vocational Opportunities, programs ‘Seedling’ e-readers for nonprofit ApSeed before the tablets were shipped out to youngsters to use in the recognition of shapes, colors, letters and numbers.

SALISBURY — Since rolling out its first literacy-focused touchpad in 2016, local nonprofit ApSeed has seen explosive growth in the number of children it serves.

In its first year, ApSeed provided 60 devices to children free of charge. The next year, 600 more were distributed, with the upward trajectory continuing in years to come.

This planned growth as well as what’s already taken place was made possible through continued market research and public and private partnerships, he aid.

“We’re getting smarter every month,” said Alcorn. “We’re finding out things we can do from a research standpoint, from who the target market is to what our expectations should be, to what kind of apps are working for the different age groups.”

Application and device efficacy are measured through what Alcorn called an “unsophisticated” approach: there was no wireless or Wi-Fi enabled logging. Instead, ApSeed tracked just how well its touchpads were helping prepare users for kindergarten through two main sources: parent testimonials and school system-based testing.

“We’re just now getting there,” Alcorn said. “It’s been two years of waiting for these 2- to 3-year-olds to get old enough to go to kindergarten in a mass, in enough of them that it makes a difference.”

In Davie County, the second served by ApSeed after Rowan, numbers have proved promising: a collaborative effort from the school system to provide professional development to pre-kindergarten teachers as well as funding from the Mebane Foundation for 1,000 Seedlings led to a 15% increase in students testing at kindergarten level as they entered school – from 71% to 86%.

These numbers are sure to be reflected as ApSeed’s effort continues to expand in 2020. Aside from serving Rowan and Davie counties, ApSeed has recently expanded into Yadkin County and received help from an “angel investor” to begin serving two school districts in South Carolina: Chester County and Fort Mill City.

It’s a growth trajectory Alcorn said he hopes to see facilitated through public funding, which was proposed to North Carolina’s legislature in 2019 through a House bill sponsored by Reps. Harry Warren, R-76, and Craig Horn, R-68. The bill would have funded roughly 20,000 Seedlings across five counties.

The hope, Alcorn said, was to get the attention of the school systems so they knew: ApSeed was here to help “in a big way.”

“The school district is our ultimate client,” said Alcorn. “We just want to prepare them with the very best product of a good solid kindergarten class.”

A solid kindergarten class, would, in turn, increase ease of learning and, ultimately, lead to more passing scores on third grade reading tests: a marker closely correlated to academic success throughout secondary school.

“It’s 2020: this is the year of seeing clearly,” Alcorn said with a chuckle. “Get it, 20/20? Therein, we can clearly come up with a growth plan and evidence-based research that can show that we’re on to something, that we can really make a difference in preparing children for kindergarten.”