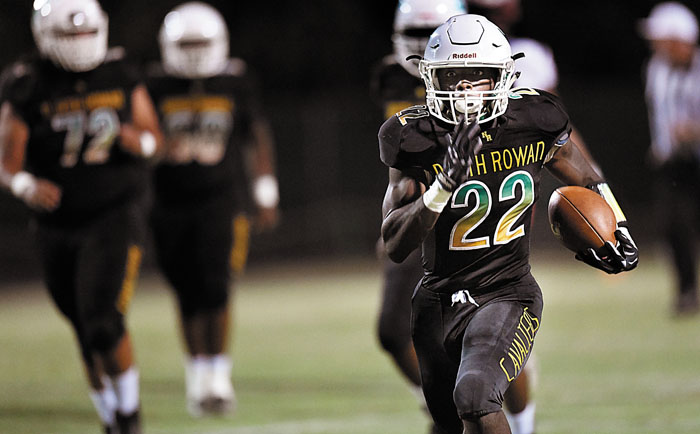 His work was continued by stat-minded writers such as John Workman. I’ve handled updates to the football record book for the last 19 years, with the assistance of all of the people who have covered games for the Post and with the aid of the Davie, Stanly, Lexington and Statesville newspapers.

Our record book, unfortunately, will never be a perfect process. We’ll never have comprehensive career rushing, passing or receiving stats for 99 percent of the players from the old days.  We’d love to know how many career yards Billy Ray Barnes rushed for at Landis High or how many Boyden’s Jerry Barger or Ken Owen or Bobby Crouch piled up. We’d like to know how many George Alexander, Spotlight Jones and Ernest McCray gained for J.C. Price.

But even Ed, the hardest-working sportswriter of all time, couldn’t compile stats where stats weren’t available. We’ll never have pre-consolidation and pre-integration stats because Post boxscores in those days revealed only the starting lineups and who scored the touchdowns and conversions. There’s usually no mention of individual rushing or passing yards, unless someone had a truly amazing game.

At the end of a season, the Post always published a list of the touchdown leaders in the county, but that was about it.

So what do we have? Well, thanks to Ed, we have the scores of every football game ever played by West Rowan, East Rowan, North Rowan and South Rowan. We’ve got all the Boyden/Salisbury scores back to the late 1920s, and we’re still working to fill in the rest of the blanks all the way back to 1915, when high school football began in Rowan County.

Rowan teams, even the really good ones, didn’t throw the ball much prior to 1960. Games were much lower-scoring. Most seasons were 10 games or fewer.

What that means is the passing and receiving records we have now wouldn’t change much even if all the stats from every game were available. There’s a pretty good chance they wouldn’t change at all.

But the rushers are a different story. Some of those running backs from the 1940s and 1950s definitely would make our all-time lists — if all the information was available.

North’s Mitch Ellis (1993-94) is fifth on the all-time list and may have been the best of all. His 5,581 passing yards came in just two varsity seasons.

Seniors Drew Huffman (South) and Logan Forbis (East) have been added to the list. Huffman is 31st, while Forbis, despite several injuries, is 43rd.

Some of this year’s quarterbacks, who were first-year starters, easily will make the list next year. There are currently 54 quarterbacks on the list.

Wyrick’s 14-game 2014 season (3,301 passing yards) included stellar playoff performances against Freedom and South Point. He supplanted Ellis at the top of this list.

Our list includes 66 seasons (some QBs are on it multiple times)  and goes all the way down to 1,100 yards. Salisbury junior Vance Honeycutt (34th), West Rowan sophomore Noah Loeblein (61st) and North Rowan junior Kyree Sims (65th) made the list for their 2019 seasons. All three were helped by their teams’ success in the playoffs.

In 1997, North Rowan and East Rowan had very good teams. They clashed in Week 2,  in a perfect storm for passing records.

North’s efficient passing game was rarely stopped that season, but East was strong enough to stay in it, so Sturdivant kept throwing.

North won, 40-28. Sturdivant was 18-for-32 passing for 414 yards, with five touchdowns and three interceptions. Those 414 passing yards remain the county record. He also ran for a touchdown.

A week later, in a 34-32 loss to West Rowan, Sturdivant threw 39 times and had five more touchdown passes.

The Post’s all-time list for passing yards in a game extends down to 267 yards. Fifty-two games with at least 267 passing yards have been recorded.

There were no new entries this season.

Wyrick owns quite a few.

He’s at the top of the list for completions in a game (36) and career TD passes (74), and he’s tied for the record for touchdown passes in a game. Wyrick threw five TD passes three times. Sturdivant (twice), North’s Ellis, West’s B.J. Sherrill and South’s Charles Sherrill also accomplished the feat.

Seth Wyrick, the other half of East’s record-setting pass/catch siblings, set the county record for career receptions from 2012-14. He had 189.

West’s Jalen Houston was moved to running back as a senior, but he still finished his career with 118 catches for ninth place on the county’s all-time list.

Only 13 players have reached the 100-reception milestone.

North’s Denerio Robinson finished with 60 catches in two seasons and is 44th on the all-time list.

Houston had enough work through the air this season to move up to fourth place on the all-time list with 2, 581 receiving yards.

There have been 41 1,000-yard receiving seasons recorded in the county.

Johnny Yarbrough had 58 receptions in 1969, an astounding record at the time.

Salisbury’s Patrick Taylor had 44 catches this season to lead Rowan receivers. While that doesn’t rank all that high on the county list, he did  break Craig Cesario’s Salisbury record for catches in a season that had stood for three decades.

While there were no new entries this season on the all-time top 25, Salisbury’s Taylor broke another school record for receiving yards in a season with 697.

North’s Ken “The End” Beck caught 19 passes against Davie in 1966. That’s been the standard for receptions in a game for more than 50 years.

Yarbrough, who performed his magic for the Mustangs five decades ago, still holds the county record for career TD catches with 43. Weeks (39), Seth Wyrick (35) and Houston (34) made good runs at that record.

Weeks holds the record for touchdown catches in a season with 19. That’s one more than Yarbrough had in 1970 and Seth Wyrick had in 2014.

Seth Wyrick has the county record for receiving yards in a game with 264 against Freedom in the 2014 state playoffs.

The only five-TD reception game ever recorded was by North’s J.R. Neely in 1997 against West Rowan.

East Rowan’s Sammy Pinckney is 12th on the county’s all-time list with 3,445 yards and still has a season to go.

Salisbury’s Mike McLean also has another season to go and is already 22nd with 2,790 rushing yards.

Malcolm Wilson finished his brilliant career at North Rowan with 4,021 rushing yards, good for seventh on the all-time list.

West Rowan’s Jalen Houston didn’t become a full-time running back until his senior season was well under way, but he still finished 43rd on the all-time list with 2,178 rushing yards.

Carson’s Hunter Courtney is tied for 45th with 2,003 rushing yards.

West’s K.P. Parks is likely to stay at the top of the list for many more decades. He totaled an incredible 10,915 rushing yards in four varsity seasons.

Needless to stay, Parks may also rule this list forever. In his senior season of 2009, he rushed for 3,794 yards.

To break that record, a back would to have to play in 16 games (all the way to the state championship) and average 237.2 yards per game.

Besides his record-setting season in 2009, Parks also owns the third and fifth biggest rushing seasons in county history.

McLean had 1,522 yards this season, and while that was just the fourth-highest total in the county, it was the 15th-best season all-time.

Courtney had 1,024 yards this season, so he made the all-time list.  With five added this year, 91 1,000-yard rushing seasons have now been recorded.

This was the Parks record that nearly fell in 2019.

The surprising challenger was Carson’s Courtney, who rolled for 346 yards in the season opener against South Rowan. He came up 10 yards short of Parks’ 356 against Carson in 2009.

Wilson’s 318-yard game against Chatham Central in 2019 moved into sixth place on the all-time list.

The Post has always tried to record every 200-yard rushing game. They were quite rare in the pre-Parks and pre-Warren days.

This season, for the first time, we actually had pairs of running backs on the same team putting up 200-yard games in the same night,with West’s Houston and Cayleb Brawley and East’s Pinckney and Vincent Jones accomplishing the feat.

There were other amazing rushing performances in 2019, Pinckney rushed for 288 yards against a good South Iredell squad. Houston had 278 in a playoff game as West knocked off top-seeded Crest.

Total offense is a stat that combines rushing and passing yards.

It’s a quarterback-friendly stat, as quarterbacks usually get some rushing yards, but running backs generally don’t get any passing yards.

He had 5 more yards than Parks, who had zero passing yards.

Salisbury QB Vance Honeycutt had a season this year that ranks 28th on the all-time list. He had 2,133 yards of total offense. He did that while missing two games.

Parks is No. 1 here by quite a bit, with those 10,915 rushing yards during four varsity seasons.

Samuel Wyrick is No. 2 on the list, with 7,571 yards in three varsity seasons.

Next are North’s Sturdivant, West’s Sherrill and North’s Sakelo Lilly.

South QB Huffman made the all-time list with 3,022 yards.

West’s Kacey Otto is a quarterback who hasn’t been mentioned yet, but his 504-yard effort in a 2015 playoff win against Carson is a county record.

Otto had a superb passing night — 337 yards — but he also had the biggest rushing total of his career (167 yards).

Prior to Otto’s career game, North QB Graham Hosch had held the single-game total offense record for 15 years. Hosch accounted for 443 yards in a 2000 game against Scotland.

Parks scored 59 touchdowns as a senior and had 158 in his career.

Those records should stand the test of time.

One of the athletes who played against Parks holds the county records for fumble recoveries in a season (8) and a career (24).

That’s North’s Javon Hargrave, who has gone on to do big things in the NFL with the Pittsburgh Steelers.

The late Adrian Davis made 13 interceptions for North in 1994 and had 22 in his career. He’s the county record-holder on both counts.

Teams are generally throwing more than ever, but no one has made double-digit picks in a season since West’s Justin Avery had 10 in 2007.