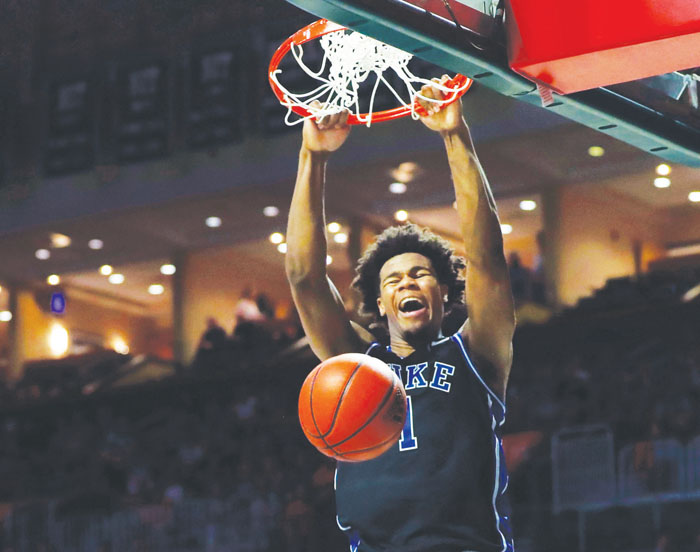 BOTTOM LINE: No. 2 Duke looks for its ninth straight win in the head-to-head series over Georgia Tech. Duke has won by an average of 18 points in its last eight wins over the Yellow Jackets. Georgia Tech’s last win in the series came on Jan. 9, 2010, a 71-67 win.

FEARLESS FRESHMEN: Duke has benefited heavily from its freshmen. Vernon Carey Jr., Matthew Hurt, Cassius Stanley and Wendell Moore Jr. have collectively accounted for 57 percent of the team’s scoring this year and 60 percent of all Blue Devils points over the team’s last five games.

ACC IMPROVEMENT: The Yellow Jackets have scored 74.8 points per game against ACC opponents thus far, an improvement from the 64.7 per game they recorded against non-conference foes.

MIGHTY MICHAEL: Michael Devoe has connected on 43.9 percent of the 66 3-pointers he’s attempted and has made 8 of 15 over his last three games. He’s also converted 69 percent of his foul shots this season.

BOTTOM LINE: North Carolina looks for its seventh straight win in the head-to-head series over Pittsburgh. In its last six wins against the Panthers, North Carolina has won by an average of 19 points. Pittsburgh’s last win in the series came on Feb. 14, 2015, an 89-76 victory.

SENIOR STUDS: North Carolina’s Garrison Brooks, Brandon Robinson and Justin Pierce have combined to account for 39 percent of the team’s scoring this season, including 50 percent of all Tar Heels points over the last five games.

JUMPING FOR JOHNSON: Xavier Johnson has connected on 40.5 percent of the 37 3-pointers he’s attempted and has made 3 of 6 over his last three games. He’s also made 73.5 percent of his foul shots this season.

LONG-RANGE THREAT: Pittsburgh’s Murphy has attempted 79 3-pointers and connected on 35.4 percent of them, and is 11 for 20 over the last three games.

VETERAN PRESENCE: Both of these teams have leaned heavily on their seniors this year. Markell Johnson, C.J. Bryce, Devon Daniels, D.J. Funderburk and Jericole Hellems have collectively accounted for 73 percent of North Carolina State’s scoring this season. For Notre Dame, John Mooney, T.J. Gibbs, Prentiss Hubb and Juwan Durham have combined to account for 63 percent of all Notre Dame scoring, including 72 percent of the team’s points over its last five games.

CREATING OFFENSE: Johnson has made or assisted on 47 percent of all North Carolina State field goals over the last five games. The senior guard has accounted for 27 field goals and 40 assists in those games.

STREAK SCORING: North Carolina State has won its last eight home games, scoring an average of 81.3 points while giving up 63.1.

BOTTOM LINE: No. 10 Florida State presents a tough challenge for Wake Forest. Wake Forest has won one of its two games against ranked opponents this season. Florida State is looking to extend its current six-game winning streak.

STEPPING UP: Brandon Childress has averaged 15.7 points and 4.6 assists to lead the way for the Demon Deacons. Complementing Childress is Olivier Sarr, who is putting up 11.5 points and 8.6 rebounds per game. The Seminoles are led by Trent Forrest, who is averaging 12.1 points and four assists.

ACC ADVANCEMENT: The Seminoles have given up just 59.8 points per game to Atlantic Coast opponents so far. That’s an improvement from the 64.4 per game they allowed in non-conference play.

TERRIFIC TRENT: Forrest has connected on 34.5 percent of the 29 3-pointers he’s attempted and has made 4 of 10 over his last five games. He’s also made 78.7 percent of his foul shots this season.