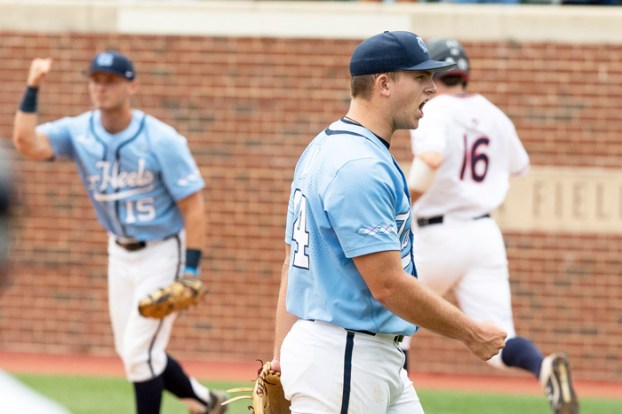 SALISBURY — University of North Carolina — Chapel Hill student-athlete Austin Love is one of the Salisbury Post’s “10 to Watch” in 2020.

Love, 20, is a redshirt sophomore pitcher on the Tar Heels baseball team. With a solid season this spring for Carolina, the West Rowan High School graduate may hear his name called in this summer’s Major League Baseball draft.

Love, a 6-foot 3-inch, 230-pound right-hander with excellent velocity on his fastball, was already on the radar of MLB scouts, with an 8-4 record and 3.18 earned run average for the 2019 Tar Heels. He struck out 67 batters in 67 innings.

Then, in the NCAA Super Regionals against Auburn June 9, Love turned more heads with an outstanding outing in Game 2 of the best-of-five series. Despite being home at Boshamer Stadium, UNC lost the series opener to Auburn, 11-7.

In the must-win Game 2, Carolina starter Austin Bergner had not allowed a run, but had thrown 96 pitches in just 4.1 innings. Coach Mike Fox turned to Love, who fired the final 4.2 innings, notching the win, to even the series. Love allowed just two hits, struck out six batters and walked no one, with a very efficient 50 pitches.

Unfortunately, for the Tar Heels, Auburn won Game 3, 14-7,  and advanced to the World Series. The Tigers scored an unheard-of 13 runs in the first inning of Game 3, something Love and his teammates hope to put behind them in 2020.

“Definitely, all of the returning players want to make up for that last game and hopefully, get to Omaha (World Series),” Love said. “We have four to five pitchers returning and a couple of position starters coming back, so we should be pretty good.”

Love said that the coaching staff is expecting him to be in the starting rotation this spring. Obviously, Love was a starter in high school and, then, got reacquainted with that role last summer, pitching for the Orleans (Mass.) Firebirds in the prestigious Cape Cod League. Love was 2-1 with a 2.70 ERA against strong competition.

Love has been home for Christmas break, but returns to Chapel Hill on Monday and baseball practice starts right away. The Tar Heels’ season opener is Feb. 14, hosting Middle Tennessee. At this point, Love is focusing more on the season than the thoughts of being drafted.

“I guess anything can happen,” said Love. “I’ve talked to some scouts, but it just depends on how this season goes. … I’ll work as hard as I can to go out and help the team.”

Coming out of West Rowan, Love was rated the No. 9 pitcher in North Carolina and No. 24 overall player in the state. He earned all-state honors in 2017. For his career with the Falcons, Love had an ERA of 1.42 and struck out 232 batters in 163 innings.

Growing up, Love said, baseball was always his favorite sport, even though he was a good basketball player for West Rowan as well during his junior and senior years. His sister, Kelcie, is a sophomore at West Rowan and a member of the Falcons’ state 3A Final Four volleyball team.

Who would play you in a movie? Matthew McConaughey.

What would you want for your last meal? Gravy biscuits from Hendrix Barbecue.

Who will you be watching in 2020? Nationally: Major League Baseball player Bryce Harper “because I’m a Philadelphia Phillies fan.” Locally: His sister, Kelcie, a sophomore volleyball player at West Rowan High School.

What is your reaction to being named as one of the “10 to Watch”?  “A surprise that I wasn’t expecting … a nice, unexpected honor.”