A day late but right on time: County’s first baby arrives on Jan. 2 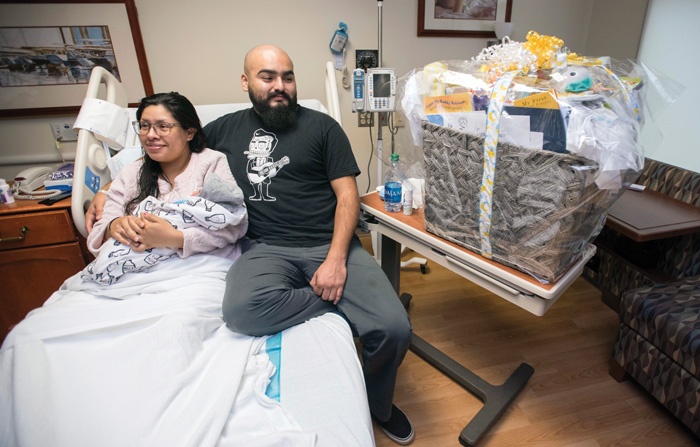 JON C. LAKEY/SALISBURY POST Parents Melissa and Diego Ortega and their new born son Cain. Nurses and hospital staff at Novant Health Rowan Medical Center in Salisbury had to wait a day for the first baby of the year to arrive. Seven pound and four ounce Cain Ortega was delivered by routine cesarean section on Thursday morning (Jan 2, 2020) at 8:42 AM to parents Diego and Melissa Ortega of Lexington. Smart Start Rowan also made a delivery on Friday. The local non-profit handed off a large gift bag loaded with items for the baby as well as the parents. Salisbury,North Carolina,1/3/20.

SALISBURY – Entering the world on Thursday rather than New Year’s Day, Cain Ortega was the first baby born at Rowan Medical Center in 2020.

Weighing in at 7 pounds and 4 ounces, Ortega is the fourth child of Melissa and Diego Ortega. The couple has two other boys and one girl. Cain was delivered at 8:42 a.m. on Thursday.

The couple, from Lexington, was surprised to have the first birth in the county. A cesarean section was already planned for Thursday to clear the holiday, and New Year’s Day came and went with no other births at the hospital.

Melissa said having the first baby born in the county made the experience more unique and that it was incredible to see how each child is their own person.

Melissa said sleep would be first on her to-do list when she was released on Saturday.

“When they told us he was the first baby, we didn’t believe it because it was the second (of January),” Diego said.

Having the first baby born in the county comes with some perks. For at least 15 years, the family of the first baby is greeted by Smart Start Rowan with a gift basket. Smart Start is a nonprofit that serves children up to age five with a long list of programs falling under family support, literacy, early care, education, health and safety.

The basket was filled with toys, gift cards and other goodies for the parents as well as the new baby.This year, the basket included a massage and a facial as well as some movie tickets among the other goods. Wheeled in on a cart, the basket dominated the family’s room in the hospital.

All of the items in the basket were donated, and this year’s was the biggest basket the Smart Start has ever delivered.  Outreach and Development Specialist Sarah Payntar said this year’s basket is worth between $400 and $500.

“We do that to ensure that children are healthy and ready to succeed when they enter school,” said Executive Director Amy Brown.

This was the first year since Smart Start began delivering a basket without a delivery on New Year’s Day, something Brown said she was surprised by. There were a handful of babies delivered on both Thursday and Friday.

Brown could not recall any specific families who have received the basket and then used Smart Start’s services, but she imagines the popularity of the event and word of mouth helps spread the word about Smart Start.

“I always make sure we talk to the family in the room about the services that we offer and where we’re located,” Brown said.

Smart Start Board Chair Susan Herrington said the Ortegas were a perfect family to receive the basket because they have other kids that could take advantage of Smart Start’s programs for young children.

“It’s a good way to let the community know about the good work that we’re doing,” Brown said.