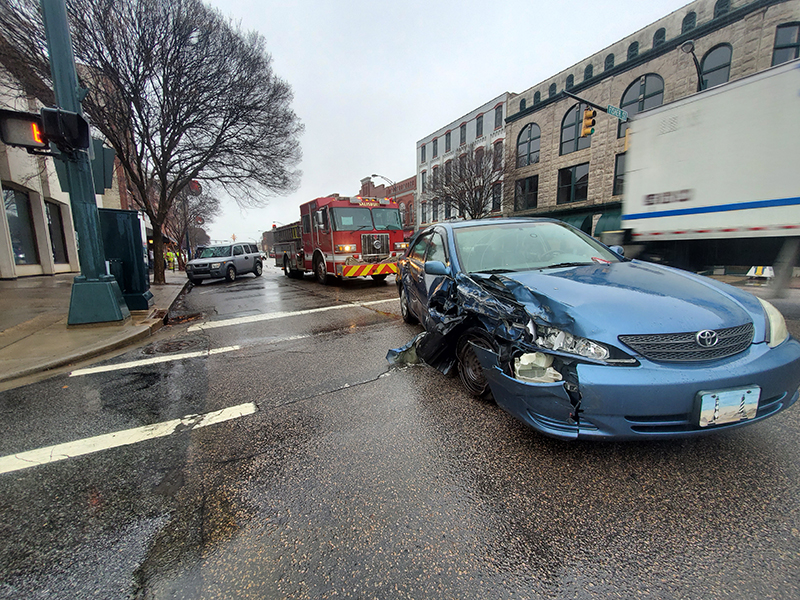 SALISBURY — Five cars were involved in two separate crashes Friday afternoon on South Main Street in downtown, according to witnesses.

There were no injuries.

A blue Subaru sustained damage to its rear fender, a silver compact car was pushed onto the sidewalk and into a rack of clothes outside of the consignment shop. A dark-colored Toyota truck was struck and spun out of its parking spot.

The blue Toyota car  that struck the others stopped near the intersection of South Main and West Fisher streets. Its driver fled on foot down West Fisher, leaving his car behind, before diving into an alleyway near Go Burrito, said Martin James, who works at Sidewalk Deli.

Christine Gordon, who works at the consignment shop, said a black Honda Civic struck one of the damaged cars after the initial accident, too. That car fled the scene, Gordon said.

Police on Friday afternoon said the incident was under investigation. And as they were collecting witness statements, a field of debris was strewn across the southbound lanes of the roadway.

James said he was just a few steps away from the accident as he was closing Sidewalk Deli for the day.

“You could just hear it. It was like goosh, goosh, goosh, goosh and the cars just moved around me,” he said. “I turned around to the guys behind me and said ‘Did you guys just see that or am I crazy.’ … It was the weirdest feeling to just be standing there and see everything just shift.”

He said there were no people in any of the damaged vehicles when the first crash occurred.