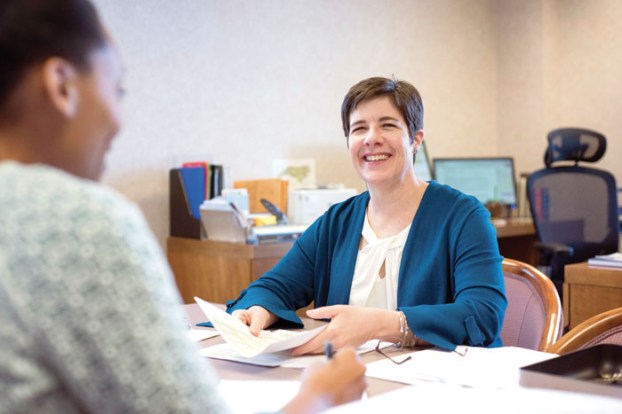 JON C. LAKEY/SALISBURY POST Library Director Melissa Oleen holds a meeting with Amber Covington , Technical Services Supervisor to discuss business. In November, Melissa Oleen was named Director of the Rowan Public Library, replacing Jeff Hall who was director for over 12 years. Hall retired in October. Aside from overseeing the three current branches in Salisbury, Rockwell and China Grove. Oleen will oversee the newest branch located in Cleveland that will be in renovated and adapted buildings on the former Cleveland Elementary school campus. Salisbury,North Carolina,12/20/19.

Quotes of the week: ‘We’re the best midsize library’

“We are the best midsize library, and we’ve had so much support, tremendous community support, a strong Friends group and all the patrons.”

“We had a wonderful time here, yet never thinking that we might later live here and raise our family in such a wonderful city.”

— Robert Glassgow, who ran a 10K race in Salisbury in 1978 and returned years later to open a dental practice and move here

“My biggest attraction to Landis was it was a place I had an opportunity to maybe make an impact and help make a difference. And that’s really important to me. That’s part of the reason why I left Bank of America.”

— Diane Seaford, who became the finance officer for the town of Landis in September

“The kids have to have the chaos aspect to figure out who they are and what their talent is. Everyone has his own chaos. For us, a lot of things are different than a regular classroom.”

— Jessie Peterson, band director for Corriher-Lipe Middle School and the first Beginning Teacher of the Year for the Rowan-Salisbury School System

“The city of Salisbury provides a strategic geographic location that allows us to enhance our delivery network across the Southeast as well as access to a strong talent pool that embodies Chewy’s
culture.”

— Pete Krilles, vice president of real estate and facilities for Chewy.com, which plans to open a fulfillment center on Long Ferry Road this year

“The folks here have given me various nicknames over time: Snake, Sugar Bear, Scoop and the ‘The Perfect Man’ come to mind. Only the nicknames that didn’t start with ‘S’ were accurate.”

— Mark Wineka, who retired at the end of 2019 and wrote a farewell column in Tuesday’s Salisbury Post titled “It’s time for me to pack up a lizard and go.’

Editorial: 2020 could be pivotal for community

This year could end up being a pivotal one for Salisbury and Rowan County, particularly for the economy and schools.... read more