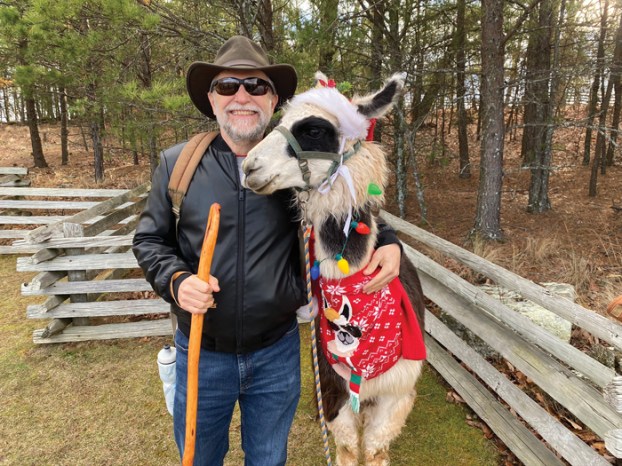 Another year. Another first day hike.

Having lived in “the Bury” for eight years, I have taken 4 first day hikes — where free, guided hikes of state parks are offered on New Year’s Day. That gives me a .500 hiking average. Since the top 2019 baseball batting average was .329, I think I’m doing OK.

Each of my hikes have been at a different park, and each has its own charm. This one’s major charm was the view. The prior year’s destination, Lake Norman State Park, had interesting flora and environment around the lake. Before that, Eno River State Park had a huge number of people and a wonderfully rushing river. And before that, Morrow Mountain was a long, rigorous hike. All have been a blast.

This year’s hike at Pilot Mountain was not overcrowded; there were probably 40 people. Our ranger was Matt Windsor, the park superintendent. He led us on a moderate hike, with some ups and downs, but the views were worth the effort.

From one of our stopping points, we could barely see Dunn’s Mountain in Rowan County. Visibility was clear, but picking out the not particularly large Dunn’s Mountain from about 50 miles away was iffy. On a really clear day, Matt said, you can see more than 75 miles.

All during the hike, dozens of turkey vultures were circling. Maybe they were waiting for one of us to not make it.

The treat was when a pair of ravens (who nest there) did aerial acrobatics for us. Ravens are fast flyers and gave us quite a show. And, oh, I almost forgot to mention that there were a couple of llamas at the trailhead available for picture taking.

It was a wonderfully sunny day, but it was also cold. The ranger gave out some light duty headbands, for which I was grateful. It kept my ears from freezing off in the breeze at over 2,000 feet of elevation.

Overall, this was a great hike, and I would recommend that others come out and enjoy nature as we look forward into the New Year. See the beauty that is out there for us to enjoy.