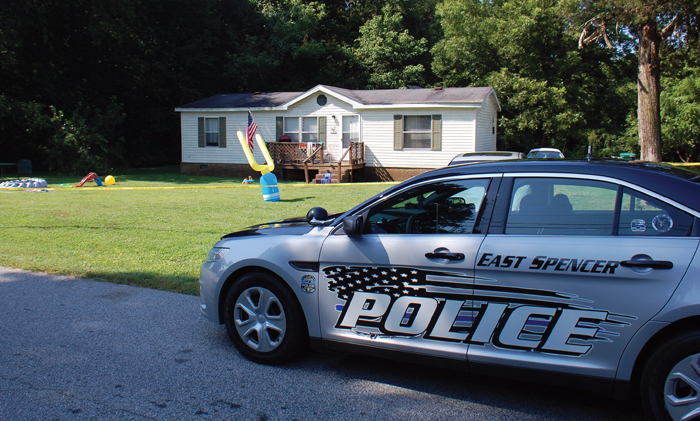 Mark Wineka/Salisbury Post East Spencer Police were investigating a homicide that occurred Saturday morning at this home at 547 Heiligtown Road.

The two agencies have seen a reduction in violent crimes over the years. And the reduction proved true, too, when comparing just-ended 2019 against 2018.

“We have seen a significant reduction in gun violence in 2019. Preliminary numbers are a 46% reduction in assaults with a firearm from 2018 and a 15% or 16% reduction in overall violent crime,” Stokes said.

He said the Salisbury Police Department focused their efforts more effectively and used analytics to guide where and when officers are in areas.

“Murders are generally a crime of anger or passion and hard to predict or prevent,” Moose said. “The numbers go up and down every year since I’ve run (the Criminal Investigations Division) and have always jumped around.”

Moose pointed to the fluctuations in homicides over the last several years, noting that in 2010 there were four homicides, three in 2011, two in 2012, six in 2013, two homicides in 2015 and seven the year after.

But Moose said experience of investigators has been important, too.

“We’ve become a very experienced group, which I feel is the biggest factor of our success. At the end of the day, investigation involves gathering evidence and talking to people,” Moose said.

Stokes attributes reductions in gun violence to a concerted effort under the Project Safe Neighborhoods initiative.

“We have studied our violence using resources from the University of North Carolina – Greensboro and now have a better understanding of what is at the heart of much of the gun violence. We now know better to target those that are involved in that type of activity,” Stokes said.

Stokes said the department has developed a prolific offender list.

“Enforcement efforts by us and the Rowan Sheriff’s Office coupled with effective prosecution by the Rowan District Attorney and U.S. attorney have resulted in those offenders being arrested and prosecuted,” Stokes said. “That enforcement targeting has gone a long way toward reducing gun violence. The reduced gun violence means fewer homicides.”

Stokes said units coordinate together, regularly reviewing the trends in reported crime and activity, to guide them where they need to be.

The main team behind efforts is the Neighborhood Crime Abatement Team (NCAT), which coordinates with the Criminal Investigations and Patrol divisions to be as effective as possible.

He added that supervisory officers from patrol have regularly scheduled meetings with Criminal Investigations and Neighborhood Crime Abatement  supervisors to look at data and decide where they all need to work over the next week or month to reduce any trends they are seeing.

They analyze and review crime to try to understand what is happening. The analysis and review are pushed by the department’s crime analyst who was hired in May.

“By building that analytical capability we have made huge leaps in being able to effectively identify and respond to crime trends,” Stokes said.

Moose said the sheriff’s office has added new tools and training to its major crime investigations that include a latent fingerprint comparison device and electronic evidence equipment and better training. He said there have been improvements in DNA evidence technology, too.

Stokes said his department has been “blessed” through a partnership with the U.S. Department of Justice, “which was a huge resource for us to develop the direction we needed to go.”

“The training and technical assistance they have provided have brought about huge leaps in what we have been able to do. Their assessment of the organization enabled us to have a solid guide for our efforts and how we approached reducing violence,” he said.

Stokes said DNA technology and a citywide security camera system are just two resources that have been used to make arrests in some violent crimes. Images made available through the camera system have been helpful in investigating several cases.

“Where that funding is coming from I’m not sure because that was cut in my budget. We have done a lot with what we have, but I don’t know how long I can keep it up if I have to cut next year (2020),” Stokes said.

If history in Salisbury is an indicator, Stokes said, funding will decrease while crime will increase.

The following homicides were investigated by the Salisbury Police in 2018 and 2019:

• On April 21, 2018, James Christopher Davis, 45, was shot at the Fishzilla Arcade. A few days later, Dedric Michelle Mason, was charged with second-degree murder. Family members of the victim said an altercation preceded the shooting.

• On May 1, 2018, Quavist Diwaun Phillips, 20, was shot outside his vehicle at the corner of Ackert Avenue and Tillman Street allegedly by Doreen Tamara Richardson, his cousin.

• On May 28, 2018, Michael Duren Faulk, 44, died of multiple gunshot wounds and was shot while riding his bike. His body was found lying in the driveway of a home on North Shaver Street — about two blocks from where he lived. Tracy Maurice Pruitt was charged two months later in his murder.

• On Aug. 3, 2018, Sabrina Annette Pinkston Curzi, 40, and her boyfriend Darryl Allen Wright, 34, were shot at Towne Creek Park. Willie Earl Williams Jr. was arrested a month later in Pitt County. Two others were charged with robbery in connection to the shooting and the assault of Curzi’s son, Michael.

• On, May 14, 2019, Mya Miller, 19, was shot while riding inside a car at North Long and 11th streets. Police said the shooting was random and Miller did not know suspect, Jeffrey Wayne Hooker Jr.

• On Oct. 19, 2019, Emerson Roebuck, 71, was shot at his West Kerr Street home. His roommate found him dead in the living room. Ronald Dashawn Pruitt, 17, of Salisbury, and Kenyatta Raphalle Belton Jr., 16, were both charged with robbery and first-degree murder. A third suspect, Tai Alexander Mosley, 21, turned himself in a month later.

The following homicides were investigated by the Rowan County Sheriff’s Office in 2018 and 2019:

• On Feb. 9, 2018, Gregory Yarborough, 21, was shot at a Gheen Road home, which law enforcement said was known for drug activity. A deputy performed CPR but was unsuccessful. Yarborough died at the scene. Taedrin DaShawn Sanders, 22, turned himself in and was charged with the murder.

• On June 24, 2018, Mariah Turner, 25, was shot at her parent’s North Long Street home during a home invasion. Someone shot the pregnant Turner as she was trying to close the door. Witt Darnell Alexander Jr. was initially charged in her murder and exonerated after a year. No other arrests have been made.

• On July 24, 2018, April Anglin, 43, and Ray Anglin, 43. Rowan investigators said Ray Anglin shot his wife multiple times and then turned the gun on himself at their Jackson Road home.

• On Aug. 29, 2018, Wanda Upright Kennedy, 67, was bludgeoned to death inside her Smith Road home in Kannapolis. Her grandson was beaten by the assailant but able to call for help. Brandon Hodges was believed to be impaired when he allegedly attacked Kennedy and her grandson.

• On Nov. 22, 2018, Tyjuan “TJ” Gibson was shot at a Lincoln Avenue home on Thanksgiving Day. He was dropped off at the hospital by two people who left. Gibson later died. Talib Latrell Kelly, 17, possessed a gun and it discharged, striking Gibson. Kelly was charged with involuntary manslaughter.

• On Jan. 27, 2019, Lakyn Jade Bailey, 25, was found shot to death in a vehicle. Detectives said the shooting occurred on Apple Road, but Bailey was driven from the scene. Bailey allegedly had been involved in illegal drug sales at a motel in Statesville. Investigators said the shooting was the result of a drug deal that turned violent. James Christopher Rife and Joshua Wade Kennedy were charged in connection to her death. Rife was found dead in his jail cell in September 2019.

• On March 3, 2019, Jabari Isaiah Rogers, 17, was shot and killed on Cone Drive in Woodleaf. Hayden Scott Godair was identified as the suspect and arrested the next day.

• On May 6, 2019, Michael Earley, 19, was found dismembered and his body partially burned in the Rockwell area. He was buried in a shallow grave behind the home of the teen accused of killing him, Carlos Rosas Jr.

• On Sept. 14, 2019, Robin Otto Worth, 35, was shot during a home invasion/robbery. Investigators said he was the suspect. The shooting was ruled self-defense.