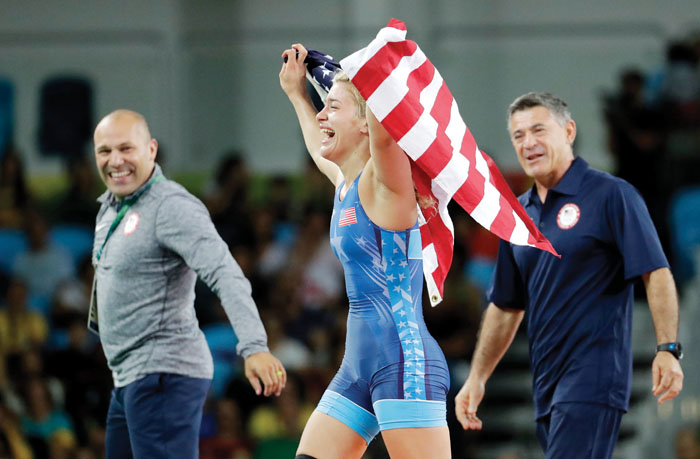 FILE - In this Thursday, Aug. 18, 2016, file photo, United States' Helen Louise Maroulis celebrates after beating Japan's Saori Yoshida for the gold during the women's wrestling freestyle 53-kg competition at the 2016 Summer Olympics in Rio de Janeiro. Maroulis was one of the most celebrated Olympians in 2016 when she became the first American to win a gold medal in women’s wrestling, and she was expected to be one of the faces of the sport in Tokyo in 2020. She still might be if she’s able to qualify. (AP Photo/Charlie Riedel, File)

Helen Maroulis was one of the most celebrated Olympians in 2016 when she became the first American woman to win a gold medal in wrestling. She was expected to be one of the faces of the sport in Tokyo this year.

She still might be if she can qualify. That’s far from a certainty after a tumultuous two years in which she has had at least two concussions, a severe shoulder injury and treatment for anxiety and post-traumatic stress disorder.

The 28-year-old Maroulis said she briefly retired from the sport after suffering yet another injury in August. Not long after that, she felt much better and had a change of heart.

“I had a really impactful conversation with my mom, and the thing for me was I don’t want to retire, but I also don’t want to risk my health,” Maroulis said. “I don’t feel I’m past my prime. I feel I still have years left of wrestling in me.”

Maroulis, who hasn’t competed in a year and a half, said she plans to wrestle at an event in Canada in March before going to the Olympic trials in April.

Maroulis was at the top of the sport between 2015-17, winning 78 of 79 matches and two world championships. Her breakthrough came at the 2016 Games in Rio de Janeiro, where she ended Saori Yoshida’s 206-match winning streak with a stunning 4-1 decision in the 53-kilogram final. Yoshida, of Japan, had been a three-time Olympic gold medalist and 13-time world champion and had pinned Maroulis their previous two meetings.

The native of Rockville, Maryland, rode the high of that victory for more than a year. In January 2018, her life changed dramatically.

She was competing in a professional wrestling league in India when she and her opponent knocked heads. She didn’t feel right afterward. To her regret, she says, she allowed an American doctor to check her for concussion symptoms over Facetime. She was medically cleared and continued to compete.

In retrospect, she said, she was badly hurt and not thinking straight.

“I really could not tell left from right, pretty much,” she said. “In that situation, man, I just wish there was someone there who would have taken the reins or maybe seen that better. Maybe I just hid it so well. I had to tape cotton balls in my ears and I had to hide in the bathroom for two hours before my match, and then my coach would come get me. So if that didn’t alarm anyone that we shouldn’t wrestle under these circumstances, what does that say?”

Maroulis received concussion treatment when she returned to the United States and was given the go-ahead to resume training. In May 2018, she suffered another concussion sparring with a male partner she says became overly physical.

“I’ve always been tough my whole life and I’ve always had to prove myself with the guys,” she said. “I just realized you get to a point — especially with recent accolades — that grown men want to test themselves against me and see how they fare. When you’re trying to measure your ego against something, I think you’ll overlook hurting someone or being negligent, so that’s my take on that.”

In addition to a concussion, she injured her neck and had vertigo. She said she was also left with bouts of anxiety and PTSD, and she received a week of treatment.

She willed herself to compete in the world championships in Budapest in October 2018 and was pinned in the first round by Alyona Kolesnik of Azerbaijan. She not only lost, she injured a shoulder and required surgery that left her inactive for eight months.

“That was a real blessing in disguise because that also was time for me to heal, God saying, ‘Step away and heal and it’s OK to heal,’” she said. “I had to give myself permission to heal.”

However, she was hurt again this past August while training in Colorado Springs. She declined to discuss the nature of the injury other than to say she initially thought it was head-related: “It was hard for me to drive round-trip to Denver; it was hard for me to get groceries.”

Maroulis decided to give up wrestling, but felt better and talked to her mom about coming back as well as a mentor. They encouraged her. She also happened to watch an inspiring video about the Olympics.

Maroulis, now wrestling at 57 kg, said her health scares ultimately have made her stronger mentally. She doesn’t let a bad practice bother her as much. She loves the sport as much as ever, maybe even more.

“I’ve never had injuries that sat me on the sideline so long,” she said. “Even if it doesn’t look like you’re getting better right now, that doesn’t mean come August 2020 you’re not going to be in the best shape and feeling mentally and emotionally the best you ever felt in our life. That’s me practicing my faith and hope that the best is yet to come.”