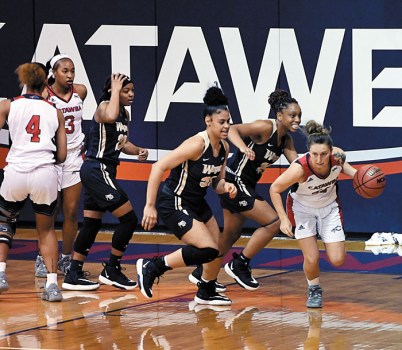 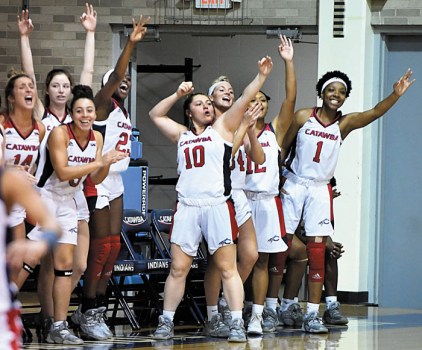 Catawba's bench, photo by Wayne Hinshaw, for the Salisbury Post 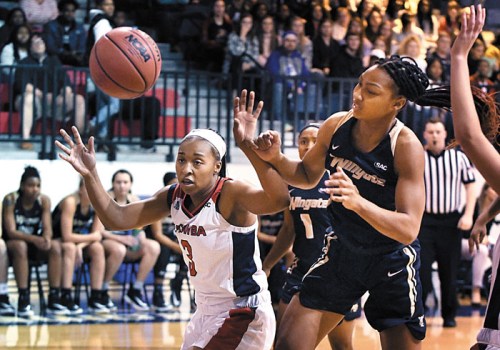 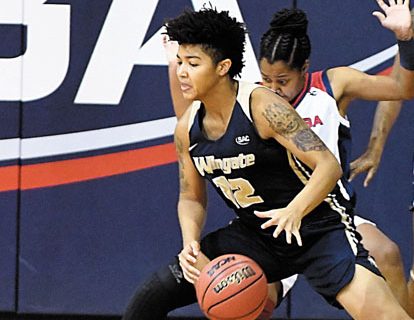 Games against Wingate have been mostly gloomy for the Indians over the years, but they handled the Bulldogs, 78-58, with relative ease, on Thursday evening in the 100th meeting of the programs.

The holidays had little impact on Catawba (10-0, 5-0 South Atlantic Conference), which started a new year the same way it rang out the old one — winning.

“Our shooting was a little off, but I’ll put that down to the ladies going home for 10 days,” Catawba coach Terrence Baxter said. “We got back in the gym on Monday and we practiced twice. I could see everyone was in good shape, ready to go, and I’ll credit that to our veteran leadership.”

Taisha DeShazo and Lyrik Thorne, very good shooters, shot a combined 3-for-14 on 3-pointers, and the Indians still won by 20.

Other than not shooting straight from long range, Catawba did everything right.  The Indians had  a 28-15 edge in the turnover battle. They went 23-for-27 from the foul line.

The Bulldogs are fairly big, but Catawba had the edge in offensive rebounds and blocked shots.

Defensively, Catawba was really tough.  Basketball is a game of runs, but Catawba never let the Bulldogs make one. Wingate held the lead for a grand total of 44 seconds.

Catawba created a crazy pace and got the style of game it wanted to play.

Senior Madi Hallman, who had been 1-6 in her career against Wingate, made two 3-pointers for an early 6-2 Catawba lead.

“It was important for us to get off to a fast start,” Hallman  said. “I made some shots at the beginning. That helped us.”
DeShazo drilled back-to-back 3-pointers in the second quarter to push a 22-20 Catawba lead to 28-20. That’s where the Indians got some separation.

Hallman picked up her second and third personals seven seconds apart in the second quarter and had to sit with five minutes left in the first half. But Catawba still expanded its lead to 47-37 by halftime, with a flurry of layups.

Hallman stayed on the bench to start the second half, but that just meant that Catawba’s sixth person, guard Shemya Stanback, was on the floor and driving the Bulldogs (9-3, 3-2) crazy with her quick-footed and clever defense.

“When I go into the game, I’m looking to bring energy,” Stanback said. “I want stops and I want to get us going in transition.”

Stanback did those things.  Wingate scored only 21 points in the second half.

“If you’re not used to running like we’re running, you’re going to get tired,” Hallman said. “The third quarter, we could start to see it.”

Wingate got within 47-42 on a bucket by former Salisbury High standout Bryanna Troutman with 8:50 left in the third quarter, but DeShazo went on a personal 6-0 run to put the Indians up by 11.

By the end of the third quarter, Catawba led by 14, and the way Catawba was shooting free throws, there was little danger of the Bulldogs coming back.

Talia Barnes did some damage down the stretch with inside finishes as the Indians pulled away for that 20-point margin. Catawba has been winning this season by an average of 21 points.

DeShazo scored 22 points with the aid of 8-for-9 foul shooting. Thorne went 6-for-6 from the line, scored 11 and had six assists. Lauren Ford was a factor with four blocked shots.

Stanback had 10 points and four steals. Hallman was 3-for-4 on 3-pointers and scored 11.

“The last couple of years, a big game like this, we just couldn’t hold the lead, couldn’t finish it off,” Stanback said. “But now we’ve got a team that can finish.”

Hannah Clark scored 18 for the Bulldogs. She accounted for all three of Wingate’s 3-point makes.

Catawba returns to action at home against Carson-Newman at 2 p.m. on Saturday.

NOTES: Troutman played 17 minutes for the Bulldogs. Besides that third-quarter bucket, she had a block, a steal and three rebounds. She had a nice rebound of a teammate’s missed free throw, but Catawba’s Sara McIntosh blocked her follow. … Catawba freshman Janiya Downs, who starred at South Rowan and saw plenty of Salisbury and Troutman in high school, played 10 minutes and scored two points. … Elizabeth Webb, a senior starter for the Indians last season, was at the game. She’s in graduate school. … Wingate still leads the series, 63-37. The Bulldogs won all 21 meetings in the 1980s.