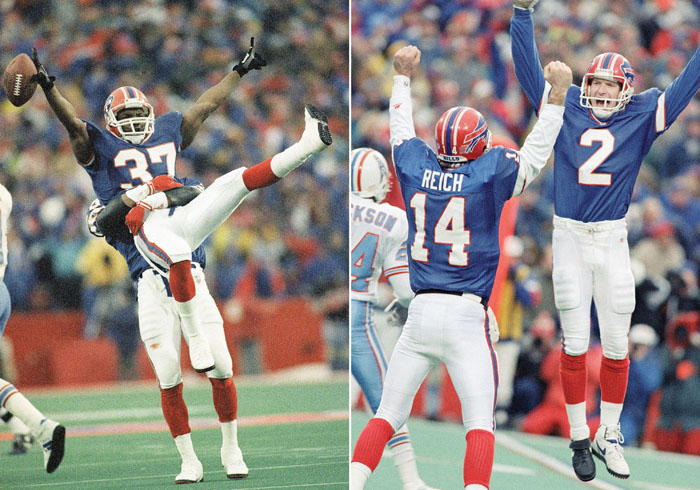 FILE - At left, in a Jan. 3, 1993, file photo, Buffalo Bills cornerback Nate Odoms gets a lift from teammate Henry Jones after intercepting a pass by Warren Moon of the Houston Oilers during an overtime period of an AFC wild-card game to set up Steve Christie's game winning field goal, in Orchard Park, N.Y. At right, Bills kicker Steve Christie, right, celebrates his game-winning field goal with quarterback Frank Reich. The Bills, down 32 points, beat the Oilers 41-38. (AP Photo/John Hickey, File)

ORCHARD PARK, N.Y. (AP) — Warren Moon occasionally gets text messages from friends whenever some TV station broadcasts what he dejectedly calls “That Game.”

And each time, Moon shakes his head in dismay, as if the former quarterback would have any interest in revisiting one of the worst moments of his Hall of Fame career.

Moon, of course, is referring to what in Houston is known as “The Choke” and everywhere else “The Comeback.” It was an 1993 AFC wild-card game in which the Buffalo Bills rallied from 32 points down to beat Moon’s Houston Oilers and set the NFL record for overcoming the largest deficit in the playoffs or regular season.

Moon then breaks into a chuckle over the phone while reflecting how the Oilers turned a 35-3 third-quarter lead into a 41-38 overtime loss.

“I definitely can laugh about it, but it’s a painful memory,” he said. “But what else can you do? You can’t hold on to all that. It would drive you crazy.”

“The Comeback”  usually gets mentioned for various reasons in the days leading up the start of the NFL playoffs.

Though the Oilers relocated a few years later, becoming the Tennessee Titans, the game has added relevance this week with Buffalo (10-6) and Houston (10-6) — this time the Texans — set to play in a wild-card game on Saturday, 27 years and a day later.

Texans coach Bill O’Brien steered clear of any questions regarding the past.

“Oh, man, that was 30 years ago almost. Holy smokes,” he said. “I think this is about this week, and this is about the Houston Texans versus a very, very good Buffalo Bills team. So I’m not going down that road.”

In Buffalo, the Bills’ past has suddenly taken on new meaning because the team is finally relevant again. The Bills are making their second playoff appearance in three years, following what had been a 17-year postseason drought.

“I think it’s cool just from the standpoint of re-engaging our fan base,” Bills coach Sean McDermott said when “The Comeback” was mentioned. “And now we have a chance to take another step.”

Trailing 28-3 at halftime, Levy recalled approaching backup Frank Reich, who was filling in for injured Jim Kelly, a future Hall of Famer, and informing the quarterback how he was going to be part of history. And that was before Reich threw an interception, which Bubba McDowell returned for a touchdown to open the third quarter.

“It was borderline depressing when we fell that far behind and everything going wrong,” Levy said, also noting how future Hall of Fame running back Thurman Thomas went down with a hip injury on the same drive.

“Did I ever think we’d come back and win it? I’ve got to be honest,” Levy said, without saying yes or no.

“But still, as a great Winston Churchill fan, never, never, never give up,” he said, citing Britain’s prime minister during World War II. “And that’s what our team did: never gave up.”

A noted history buff, Levy described what followed as “four score and seven minutes,” in referring to how the Bills scored four touchdowns — one set up by a Moon interception — in a span of 6:52 to cut the lead to 35-31.

The game was decided after the Oilers won the overtime coin toss only to have their opening possession end with Moon being intercepted by Nate Odomes at the Houston 37. Three plays later, Steve Christie hit a 32-yard field goal to clinch the victory that Levy would refer to as one of the most memorable of his 47-year Hall of Fame coaching career.

Bills receiver and special teams star Steve Tasker said the outcome exemplified how tight-knit the players were on a team that would eventually make four consecutive Super Bowl appearances — all losses.

“That game captured a lot of people outside the Buffalo fan base. And I don’t think there’s any question, I think it scarred that franchise in Houston for a while,” Tasker said, accusing the Oilers of letting up in the second half. “Yeah, it was a choke, there’s no question about it. They left, mentally. They were playing Pittsburgh next week.”

Moon called it a game he and his teammates will forever rue.

Now a Seattle Seahawks broadcaster, Moon bears no grudge against Buffalo. In fact, he likes what he’s seen from a young, developing Bills team and second-year quarterback Josh Allen.

“I was rooting for the Bills this year. It’s been so long, such a (stretch) of mediocrity, and now they’re back,” he said. “I root for teams I think are really good and have the potential to be great. And this team is headed in that direction.”

This weekend, however, Moon is pulling for the Texans because of his many ties to Houston. It’s where he spent a majority of his NFL career, where his children live and where he’s active in several charitable organizations.

Whatever the outcome, Moon understands that part of his legacy will always be tied to being on the wrong end of “The Comeback.

“It’s still a painful subject to me. It’s something I don’t want to answer but I know I have to,” Moon said. “And I’ll probably have to keep answering until somebody else eclipses it.”