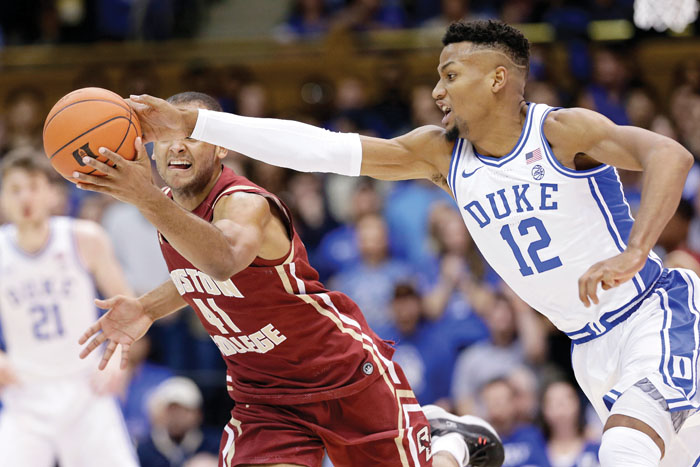 By AARON BEARD AP Basketball Writer
DURHAM (AP) — Duke had Tre Jones back healthy at the point and freshman Matthew Hurt rolling with a confident stroke. Just the way the second-ranked Blue Devils wanted to dive into the bulk of the Atlantic Coast Conference schedule.
Hurt scored 20 of his season-high 25 points before halftime to help Duke beat Boston College 88-49 on Tuesday night, while Jones had 10 assists in his return from a foot injury that had cost him two games.
Hurt made 10 of 16 shots and was 5 of 10 on 3-pointers to lead the Blue Devils, who shot nearly 52% and hit their last five shots of the first half as they blew the game open shortly before the break. Duke (12-1, 2-0 ACC) also had little trouble clamping down with its defensive pressure.
“They played like they practiced,” Duke coach Mike Krzyzewski said, “so that’s a neat thing if you practice well.”
Jones had missed the past two games with what was described as a mild sprain of his left foot. Krzyzewski had said before the Wofford win on Dec. 19 that the sophomore would’ve likely played had it been an ACC game.
Well, now that’s all that’s in front of the Blue Devils: 18 straight league games as part of the ACC’s first 20-game conference slate.
CJ Felder scored 13 points for the Eagles (8-6, 2-1), who had won four straight games coming in to Cameron Indoor Stadium. But they never mounted much of a response to Duke’s defensive pressure that turned away driving lanes and forced BC to settle for tough looks.
BC shot just 34% and made 3 of 18 3-pointers, including a six-minute stretch in the first half without a basket that helped Duke stretch out its lead.
“We did a really poor job today of keeping the floor spaced and then making plays for other people,” BC coach Jim Christian said. “We tried to do way too much finishing plays, and they did a great job recovering and blocking shots or forcing us to miss. … We needed to move the ball better, the whole game really. So it was real big problem for us the whole night.”
BIG PICTURE
Boston College: BC fell to Duke for the 13th time in 14 meetings and is 0-11 all-time in Cameron.
Duke: Jones’ return was the biggest positive for a team that needs his on-floor leadership and on-ball defensive pressure.
“Early on there was definitely some rust, just not being able to be in a game for a few weeks,” Jones said, adding: “After the first few minutes of getting my feet back under me and everything, I felt good the rest of the game.”
BACK AGAIN
It was a rough return for Derryck Thornton, who spent his freshman year at Duke before transferring to USC and ultimately ending up at BC as a graduate transfer. He was averaging a team-best 13.8 points but finished with six on 3-for-12 shooting while also leaving briefly in the first half with a right leg injury.
“Nobody on the team played very well,” Christian said. “It’s not about Derryck Thornton or anybody else.”
BIG FINISH
Hurt and the Blue Devils closed out the half in a flurry, ending when Jones found Hurt alone in the corner to bury a 3 just before the halftime horn. By that point, Hurt — who held his release to mark the make — had matched his season-high scoring output and outscored BC as Duke led 45-19 at the break.
“I made a third 3, I felt really good, and then the fourth 3 right before halftime, that really set it off,” Hurt said. “I just want to win, so I just tried to go in the second half and try to make the right plays and just try to win especially.”
TIP-INS
Duke earned its 300th victory of the decade (dating to January 2010) and its 899th all-time victory at its famously hostile home arena. … Duke has held opponents to fewer than 50 points in consecutive games for the first time since December 2010. … BC senior forward Nik Popovic (11.8 points) missed his fifth straight game. He is out indefinitely with a back problem. … Duke hit a season-high 12 of 28 3s (.429).
UP NEXT
Boston College: The Eagles host No. 19 Virginia next Tuesday.
Duke: The Blue Devils visit Miami on Saturday night.
___
More AP college basketball: https://apnews.com/Collegebasketball and http://www.twitter.com/AP_Top25
___
Follow Aaron Beard on Twitter at http://www.twitter.com/aaronbeardap