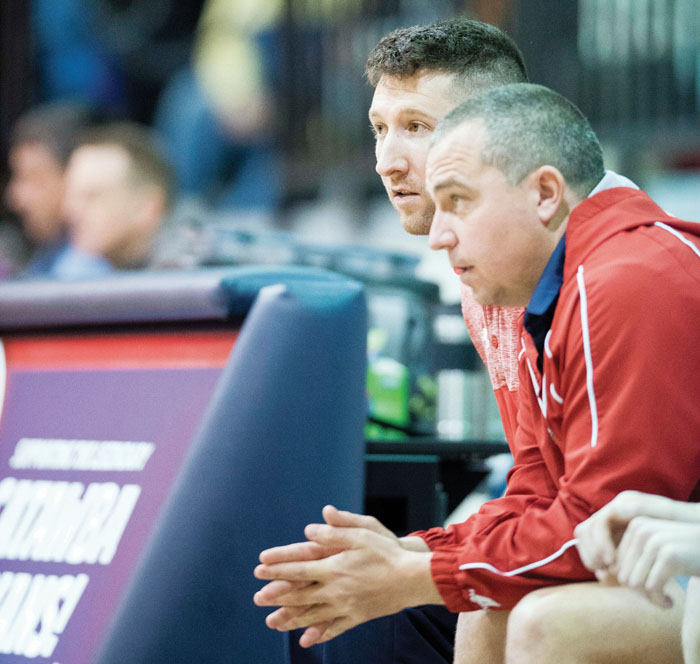 That wouldn’t be newsworthy, except that on the morning of Dec. 11, the Mustangs also lost their head coach when Kurt Misenheimer turned in his resignation.

“Not an easy decision, definitely the toughest decision of my life,” Misenheimer said. “The timing of everything, obviously, wasn’t ideal. I never thought I’d walk away in the middle of a season. But the team needed a change — and I needed a change.”

Misenheimer texted the Post with the news on Dec. 12. He wanted time to clear his head, so he wound up talking about his resignation on the night of Dec. 25. He said that, all things considered, he had a decent Christmas. He had peace of mind and was ready to move forward.

“I’m not going into hiding,” Misenheimer said. “I love the game. You’ll be seeing me.”

Misenheimer wasn’t a great player, but he was a very good one who played on some of the best teams in East history. He was on the varsity in limited role as a freshman for coach Jim Young in the 2003-04 season.

As a sophomore, his role expanded under coach Greg McKenzie, as the Mustangs won a school-record 24 games.  Misenheimer averaged 9.3 points as a junior and 10.9 as a senior on deep teams. East was 65-20 during his last three seasons. The Mustangs won the 2006 Sam Moir Christmas Classic, beating Salisbury in double overtime in the final. East was good enough that it won the 2006 Central Piedmont Conference Tournament, while competing at the 4A level.

East only has played in one Christmas tournament championship game since 2006 and lost it.

While McKenzie made winning look routine at East for a four-year stretch that included about 10 exceptional players, boys basketball at the school has been a battle for respectability, more often than not.

From 1983-2003, East experienced one winning season.  East won one conference championship in that two-decade stretch. That was when coach Rick Roseman led a 13-13 team in 1987-88 that somehow went 10-2 in the South Piedmont Conference.

In the seven seasons prior to Misenheimer getting his chance as a head coach, the Mustangs went 42-116.  East won 27 percent of the time.

“I played at Davidson County Community College before I transferred to Appalachian State and Elton Hooper (one of last season’s seniors) went to Catawba Valley Community College,” Misenheimer said. “I don’t believe East had any college players in the dozen years between us. Three years ago, we were playing in the SPC (with the Cabarrus schools) and it seemed like we were playing against Wendell Moore or Leaky Black or Lavar Batts every night. Twelve SPC players signed college scholarships one year and five that went Division I. It hasn’t been easy to win at East. It’s never been easy at East.  People expected us to go out and execute like Duke or Carolina, but it’s not like we had Zion (Williamson) or Cole Anthony.”

East, obviously, had a better chance of competing with the Iredell schools in the North Piedmont Conference than it did in the SPC.

“We stacked up much better in the NPC,” Misenheimer said. “We had a nine-win season our first year and won 10 last year.”

While East’s 2018-19 season ended with a fight-marred victory at North Iredell, Misenheimer, after a lot of rumors and a lot of soul-searching, decided to return for this season. There was reason for optimism, with a junior class filled with experienced guards and a return to basketball by 6-foot-4 Jake Hunter, an excellent 3-point shooter. East lost most of its size, but Misenheimer expected to compensate with stronger shooting.

“We had an early game against South Rowan and we made 13 3-pointers and played really well,” Misenheimer said. “Making 13 3s can make you look good, but you can’t make 13 every night. We had a lot of leadership last season from senior Hooper, Gabe Hinceman and Christian Bennett. We missed that tough leadership they gave us more than I’d expected. We were feeling that void and then we lost a couple of close ones.”

Wins and losses are never all of it. They’re a fairly small part of the big picture. Money is also a miniscule part of the equation. Misenheimer’s modest stipend of $1,600 was below minimum wage for the number of hours he invested in the Mustangs.

Just about everyone who chooses to coach or teach does so because he or she has a chance to make a difference in the lives of their players. There’s a chance to help students grow up, to learn to deal with adversity, to serve as a role model. There are lots of life lessons that can be taught through athletics. Misenheimer was eager to teach what had once been taught to him.

And he taught those lessons year-round. Basketball is no longer a seasonal sport. It’s at least a nine-month deal for coaches now with offseason workouts, open gyms, weightlifting sessions, summer camps, practices and game nights.

The scales tipped away from enjoyment to burden for Misenheimer as the early stages of this season progressed. The breaking point came when East, playing at home on Dec. 10, lost to North Stanly for the second time. East jumped out to double-digit leads, but faltered late. There were many culprits — careless turnovers, lackluster defense, poor shot selection.

“We let North Stanly come in and just run over us in the fourth quarter,” Misenheimer said. “Then I was disappointed with what I saw in our locker room after the game, guys pouting instead of trying to lift each other up. It was hard to find the right words to say.”

That loss made the Mustangs 1-6.

Misenheimer didn’t go to bed that night thinking about stepping down, but it hit him like a bag of bricks as he drove to school the next morning.

“They say you’ll know when it’s time, and it just hit me that it was time to do something,” Misenheimer said. “It couldn’t have been any clearer to me that a change was needed. The team needed it, and I needed it. I had kids who gave me everything they had  —Sammy Pinckney, Dylan Valley, Jake Hunter, Cameron Padgett — and I’ll miss coaching them, but it was time.”

So Misenheimer resigned. Jayvee coach Eric Mulkey guided the team that same night in a lopsided loss at Cox Mill and then in a loss at Davie County.

Misenheimer says everyone who speaks to him assumes parents of players were responsible for his sudden decision to resign, but he clarified that.

“Not directly, nothing any parent ever said or did had any direct effect on my decision,” Misenheimer said. “When you’re a coach, you know you’re going to be dealing with parents. It’s just part of the job. But I never based a playing-time decision on who a kid’s parents were. I played the kids who were playing the best, the kids who were coachable, the kids who hustled. I never minded talking to parents about ways their kid could improve as a player, but I wasn’t going to talk to them about playing time.”

He went on to state parents were an indirect factor because “yelling from the stands” was having a detrimental effect on the team.  Misenheimer talked about the negative impact of at least one mid-game exit by parents.

“Any successful team has to start with parents who trust coaches to be demanding of their kids,” Misenheimer said. “And I think that, unfortunately, some support was conditional. When your kids are playing and getting their shots, everything is fine. But when they’re not making shots and they’re not the best defenders,  they’re going to have to sit down. That’s when you expect that player to suck it up and cheer for his teammates.”

For its last game prior to Christmas, East installed Trey Ledbetter as interim coach. Ledbetter was  head coach for five seasons (2010-11 to 2014-15). East went 33-81 under his watch. Misenheimer assisted him most of those seasons.

Ledbetter had been serving as an assistant at Mount Pleasant.

“It took me about five seconds to get back into being a head coach,” Ledbetter said. “That first-stomp, and I was back into it.”

Then in the Dale’s Sporting Goods/Sam Moir Christmas Classic, East produced its toughest effort of the season in the first round, knocking off top-seeded North Rowan as the No. 8 seed.

East was blown out by Salisbury in the semifinals, but then played reasonably well in losing the third-place game to Davie County.

Now 2-11, Ledbetter and his team will try to salvage the second half of the season.

“I’m back in the saddle,” Ledbetter said. “When they asked, I was glad to help out. Kurt Misenheimer is my friend and I’ll do the best I can to build on the foundation that he laid. Hopefully, we can win some games.”

But he’s young, so it won’t be a shock if he returns to the coaching ranks somewhere else in the near future.

“It feels weird not to be going to practice,” Misenheimer said. “I played basketball as far back as I can remember and I coached the last eight years. Basketball has been my life.”