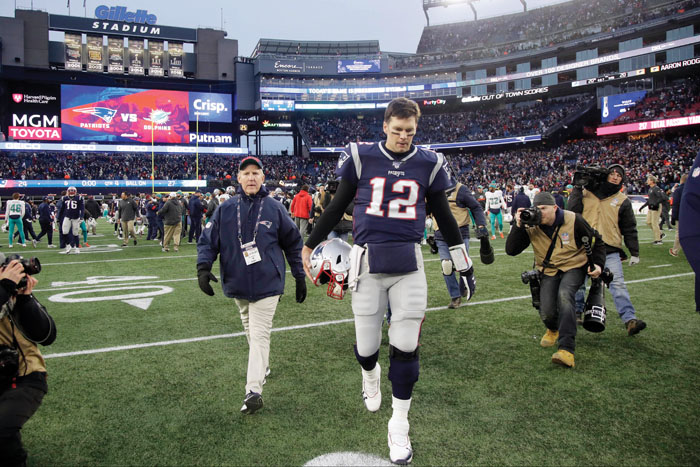 FOXBOROUGH, Mass. (AP) — No team has repeated as Super Bowl champions since the Patriots did in the 2003 and 2004 seasons.

They’ll have to overcome their own history — and a contributor to those championship teams — if they hope to do it again.

For the second straight year New England was tripped up by an unexpected last-season loss to Miami.

This time, the defeat was costly as it has relegated the defending Super Bowl champs to the wild-card round for the first time since 2009 where a tough matchup with the Titans awaits.

New England can expect to face a Tennessee team brimming with confidence. Former Patriot Mike Vrabel coached the Titans to a win over New England last season in his first matchup against the team he helped win three Super Bowls.

The Patriots’ 27-24 loss to the Dolphins on Sunday featured many of the issues that have plagued New England throughout 2019, most notably its inconsistencies on offense.

But as he prepares to play on the opening weekend of the postseason for just the fourth time in his career, quarterback Tom Brady said turning the page should be the only thing on their minds.

Brady is 2-1 in the wild-card round. But the Patriots have never made it to the Super Bowl when opening the playoffs as a wild-card team under Brady and coach Bill Belichick.

The sentiment in New England’s locker room is that history doesn’t have to define what is possible this season.

“I don’t think it is any more difficult. You just have to go out there and play football,” running back James White said. “It’s one extra game if you make it to where you want to be.”

Despite the Patriots’ merry-go-round at kicker this season, Nick Folk has brought some steadiness to the position. Since his one-week absence following an appendectomy, Folk has been spot-on, connecting on 7 of 8 field goals and going 9 of 9 on extra points. He made his lone field-goal attempt — a 25-yarder — on Sunday.

New England’s defense was picked apart by Miami and quarterback Ryan Fitzpatrick, allowing a season-high 326 passing yards. It ended a streak of 25 straight regular-season games that the Patriots hadn’t allowed a 300-yard passer, which was the longest active streak in the NFL.

The Titans ended the season ranked 21st in the NFL, averaging 224 yards per game through the air.

Linebacker Elandon Roberts again came through in a big way in his dual role at fullback with James Develin on injured reserve with a neck injury.

The Dolphins’ defense effectively took receiver Julian Edelman out of the game, holding him to just three catches for 26 yards on seven targets. It was his second-fewest receptions of the season. Edelman was questionable heading into the game with knee and shoulder injuries and has been bothered by various ailments this season. It’s not a welcome development for a Patriots offense that has battled inconsistency this season.

14 — Points per game allowed by the Patriots’ defense this season, fewest in the NFL.

The Patriots have generally been one of the best teams in the NFL coming off a loss. Since 2003, New England is 46-9 (.836) in regular-season games following a loss. As a starter, Brady is 48-13 in games after a loss.