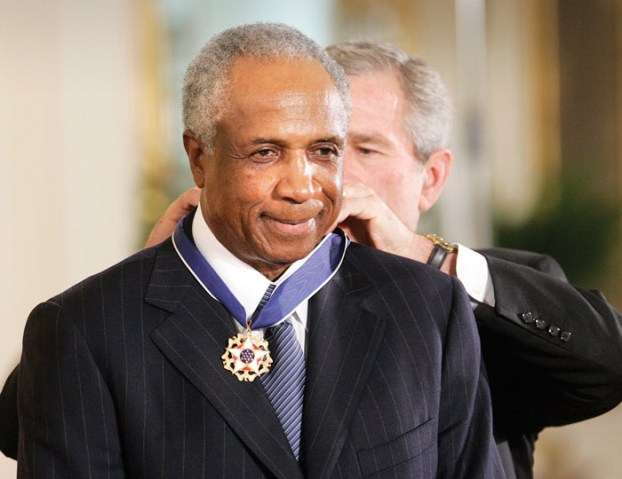 FILE - In this Nov. 9, 2005, file photo, President Bush awards baseball legend Frank Robinson the Presidential Medal of Freedom Award in the East Room of the White House in Washington. Hall of Famer Frank Robinson, the first black manager in Major League Baseball and the only player to win the MVP award in both leagues, died Feb. 7, 2019. He was 83. (AP Photo/Lawrence Jackson, File) 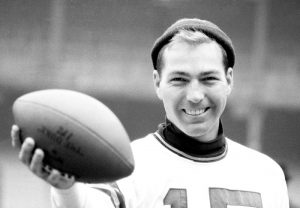 They ran the next legs, taking the baton from Jackie Robinson as black players claimed their place in the game.

The deaths in 2019 of Don Newcombe and Frank Robinson left baseball not only without two pillars on the diamond but two pillars in its fight against iniquities.

Newcombe, a pitcher for the Brooklyn Dodgers, knew the sting of segregation traveling from city to city. Martin Luther King Jr., it is said, thanked him for making his work easier. Frank Robinson dared any pitcher to throw it his way and later set the course for black managers, starting with Cleveland in 1975.

Sports also lost part of the core of two dynasties — Bart Starr of the Green Bay Packers and John Havlicek of the Boston Celtics. One was immortalized for a sneak, the other for a steal.

He came out of the Negro Leagues and played with Jackie Robinson and Roy Campanella, the three putting baseball on a testing path.

When that luminous day came for the Dodgers in 1955 — a World Series title after so many maddening Octobers — Newcombe was there. He went 20-5 that year, homering on the day of his 20th win. He was one of the best hitting pitchers.

The next year, the 6-foot-4 right-hander was 27-7, taking the first Cy Young honor and the NL MVP. Eventually, drinking diminished his talent. He moved to Los Angeles from Brooklyn and later played for Cincinnati and Cleveland.

He slid hard and played hard and knew how to make an entrance. In his first game as manager, a player-manager for the Cleveland Indians, Robinson homered in the first inning.

He was baseball’s first African American manager. He managed three other teams before becoming the first for the Washington Nationals. He was a Hall of Famer with statues at three stadiums.

Robinson hit 586 home runs, was an MVP in Cincinnati and Baltimore, a Rookie of the Year and 12-time All-Star outfielder. He was a force on the first Orioles championship team in 1966. He hugged the plate, only more determined when pitchers decked him.

Maybe the highest compliment came from Bob Gibson, never one to overpraise: “As a rule, I’m reluctant to express admiration for hitters, but I make an exception for Frank Robinson.”

On an Arctic day in 1967 at Lambeau Field, Starr sent Green Bay past the Dallas Cowboys 21-17 in the NFL title game.

The Packers trailed by three with 5 minutes left. Starr got Green Bay to the Dallas 3 and conferred with coach Vince Lombardi. Starr didn’t trust the footing and wanted to run a sneak. Jerry Kramer led the blocking, Starr plunged in with 16 seconds to go and the “Ice Bowl” legend was born.

Starr, the 200th draft pick in 1956, led Green Bay to five NFL titles. He was the MVP in 1966 and MVP of the first two Super Bowls. (Two teammates also died in 2019: offensive lineman Forrest Gregg and backup quarterback Zeke Bratkowski.)

Starr later coached the Packers for nine years, but his legacy was elsewhere. Said fellow Hall of Famer John Elway: “He set a tremendous example for all QBs to emulate.”

It started as a boy in his Ohio coal-mining town. Running, always running. The story goes that a standard X-ray machine could not take the full measure of his lungs.

At Ohio State, he ran with Jerry Lucas and won a national title. And then with the Celtics, playing under Red Auerbach and with Bill Russell and Bob Cousy. Later, for another era of championship Boston teams with Dave Cowens and Jo Jo White.

Havlicek played 16 seasons, a lean 6-foot-5 swingman and basketball’s greatest sixth man before becoming a starter. “Hondo” won eight titles, never losing in the Finals, and was a 13-time All-Star and Hall of Famer. Russell called him the “best all-around player he ever saw.”

In Game 7 of the 1965 Eastern finals, Boston led by a point with five seconds left. Philadelphia struggled to inbound. Havlicek tipped the ball to Sam Jones as the clock ran out. Radio announcer Johnny Most hollered now sacred words in Celtic lore: “Havlicek stole the ball!

In hockey, the Detroit Red Wings mourned Red Kelly and Ted Lindsay. Kelly played 20 seasons, winning eight Stanley Cups for Detroit and Toronto. He was also a member of Parliament. Lindsay played on four Stanley Cup winners in the 1950s and was a building block of the NHL players’ union.

Junior Johnson, a moonshine runner-turned-driver and owner, was one of stock-car racing’s best. He was depicted by author Tom Wolfe as “The Last American Hero.” Auto racing also is without Niki Lauda, winner of three Formula One world titles.

Baseball was shaken by Tyler Skaggs, the Los Angeles Angels pitcher who died after a drug overdose, the legal implications still unclear. … Bill Buckner, who infamously botched a roller during the 1986 World Series, was a batting champ with more than 2,700 hits. … Jim Bouton, a bulldog pitcher for the Yankees in the 1960s, threw back the curtain on baseball’s culture with his book “Ball Four.”

Soccer is diminished without England goalkeeper Gordan Banks, who made perhaps the greatest save, on a header by Pele at the 1970 World Cup.

In track, Harrison Dillard, the only Olympian to win the sprints and high hurdles, had been the oldest living U.S. Olympic champion at 96. … New Zealand miler Peter Snell was a three-time Olympic gold medalist.

The laughter quieted with the exit of sports writer and author Dan Jenkins. At his World Golf Hall of Fame induction, Jenkins listened as his honors were read.

“You left out my cure for polio,” he said.

From staff reports PINEHURST — Salisbury’s Michael Childress is tied for fifth place after the first day of the 11th... read more