Hurricane Floyd: Over his 100 years, Burton has taken life by storm 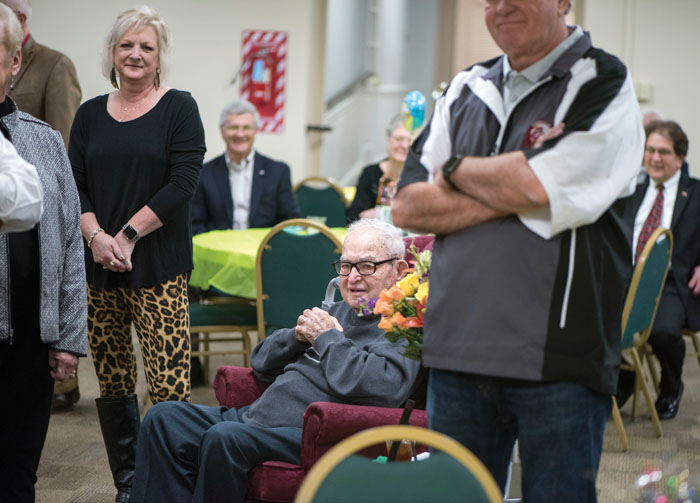 SALISBURY — In the middle of Floyd Burton’s big 100th birthday party Sunday, Tony Hoty walked up to Floyd’s chair and starting rustling through the breast pockets of his sport jacket.

“I had a letter for you here from President Lincoln,” Hoty joked, exaggerating his search.

It turns out Lincoln was about the only public official who didn’t send his or her well-wishes to Burton Sunday.

By message, Alexander promised Jan. 7 would be declared “Floyd Burton Day” in Salisbury.

Elizabeth Edwards of Tillis’ office read the senator’s words of congratulations and thanks for his service to the country during World War II.

Likewise, Edwards also read aloud the words of gratitude for Burton’s century on earth that Hudson read into the record on the U.S. House floor.

There were others who attended in person, such as Michael C. Blackwell, president of the Baptist Children’s Home of North Carolina, who resorted to rhyme in singing Burton’s praises.

Dr. Kenneth Lance, Burton’s former pastor at First Baptist Church, where the party was held, said Burton has lived 100 years of faith, integrity and love. Burton made him a better Christian, Lance said, by being not just a parishioner, but a friend and mentor.

“We’re all honored to be here and with him this afternoon,” said Dewey Preslar, one of Burton’s host of Masonic brothers. Preslar reminded the crowd of Burton’s many accomplishments as a Mason.

Burton has been a Mason since 1949. He was instrumental in planning and building the Masonic Lodge temple on North Fulton Street and was installed as the first master in the then new lodge in 1955.

That same year, Burton organized the first Masonic barbecue in Salisbury. It also was Burton who founded the Andrew Jackson Lodge’s first Brunswick stew in 1958, then served as its chairman for 20 years.

He has held numerous district positions with the Masons, and in 2013, when Preslar was grand master of N.C. Masons, he gave Burton the highest honor he could bestow — the Montfort Medal.

A grand master can only give three Montfort medals out among the 37,000 or so Masons in North Carolina. Preslar knew Burton deserved one of the medals.

Floyd and his late wife, Dot, established annual scholarships at the Oxford Orphanage, the Baptist Children’s Home of North Carolina and Catawba College.

Burton started Burton Furniture Co. in Spencer from scratch and ran it for 38 years.

He sponsored a float in the Holiday Caravan for 35 years, and was grand marshal of the parade’s 54th edition.

As he received hugs, kisses, handshakes and gifts from a long line of friends and family Sunday afternoon, Floyd proudly wore the pin signifying his 70 years as a Mason and also indicative, many people knew, of his long-time commitment to the Oasis Shrine, the Rowan County Shrine Club and Shriners Children Hospitals.

Burton spent much of his party sitting in a comfy wingback chair toward the middle of the fellowship hall, but halfway through the festivities, he walked to the front and took the microphone.

“Y’all feel like my family, and I appreciate it,” Burton said, but he added he thinks he has the “greatest family in the world.” He asked all of its members to stand and be recognized.

Burton noted he was in the hospital nursing a broken hip about a year ago, when he wasn’t sure he would make his 100th birthday.

“I don’t deserve all of this, but I appreciate everybody being here,” he said. “I thank all of you.”

Delores Morris, one of Burton’s two daughters along with Barbara “Bo” Monroe, said her father “has made it easy for us all along.”

Granddaughter Drew Roseman echoed that sentiment and said Burton made sure his children and grandchildren never wanted for anything.

Burton donated the money for a swimming pool at Oxford Orphanage, and he also contributed substantial funds toward building tennis courts there.

Floyd Monk Burton grew up in Spencer and graduated from Spencer High in 1937. His father worked for the railroad. and so did Floyd himself until he volunteered for the Army in 1942 near the start of World War II.

He would go on to serve in England, France and Germany until the war’s end. He landed in France about two weeks after D-Day. Among the medals he received was the Bronze Service Star.

Many people remember Floyd as the man behind Burton Furniture for almost four decades. Janis Smith, who attended Sunday’s party, said her first “big-girl bed” — something that wasn’t handed down from her brother — came from Burton’s furniture store.

Though she wasn’t even born before the store closed in the 1970s, Roseman said she still has pieces from Burton Furniture that were handed down to her.

Morris said her mother and father met while both were working in downtown Salisbury. Dot was a clerk at the Kress store, and Floyd worked for Dan Nicholas, who primarily sold ice cream and popcorn.

In fact, Burton worked alongside the late Ralph Ketner, who would go on to be one of the founders of today’s Food Lion grocery chain. Preslar called it “the popcorn effect,” the way Burton used popcorn at first to woo Dot, the attractive girl walking past his store.

They were married 70 years before Dot died 10 years ago.

The Burtons had a popular getaway place on Goodman Lake, where Floyd figures he taught about 100 people to water ski, including his daughters and others in the family.

Morris thinks her father kept skiing himself into his 60s — when he wasn’t driving the boat.

Floyd and Dot Burton also liked to travel. When Delores and Bo were still in college, their parents took them on as trip to Europe. But the Burtons also traveled to Japan, South America and Africa, often traveling with Dr. Jay Smith and his wife.

Musician Matthew Weaver played the keyboards and noted guitarist Clay Lunsford accompanied him at Sunday’s party for Burton. Burton likes to call Weaver his “adopted grandson,” because the two have been friends for many years.

Morris said when Burton was feeling down last year after his fall, Weaver traveled to the hospital two to three times a week and sang to Burton in his room.

Through the years Burton, a member of the Harold B. Jarrett American Legion Post, often worked the concession stand at Newman Park for Rowan County American Legion games.

He is good friends with Tommy Eaton, the star Legion pitcher for the Rowan County team that went to St. Paul, Minnesota, for the Legion World Series in 1956. Burton was there, as he was when the local Legion lads went to the World Series in Oregon.

Burton still has box seats at Newman Park, from where he watched grandson Roger Burton “Bubba” Morris pitch in years past. Bubba is now a coach at North Rowan High.

These days, Floyd Burton still lives at his house on Robin Road. He’s dealing with macular degeneration, so his eyesight is failing but his spirits are high.

He likes to sit and talk with fellow World War II veterans at the Frontier Coffee Shop for military veterans held every Tuesday morning at K&W Cafeteria. He even attended a game this past weekend at the high school basketball tournament at Catawba College.

Daughters Bo and Delores take turns and provide their father with around-the-clock companionship and care.

“We take it day by day,” Delores says.

A flag which flew over the State Capitol Building on Saturday — the official date of Burton’s 100th birthday — will be delivered to Burton soon.

And no, Burton will tell you, it’s not signed by George Washington.