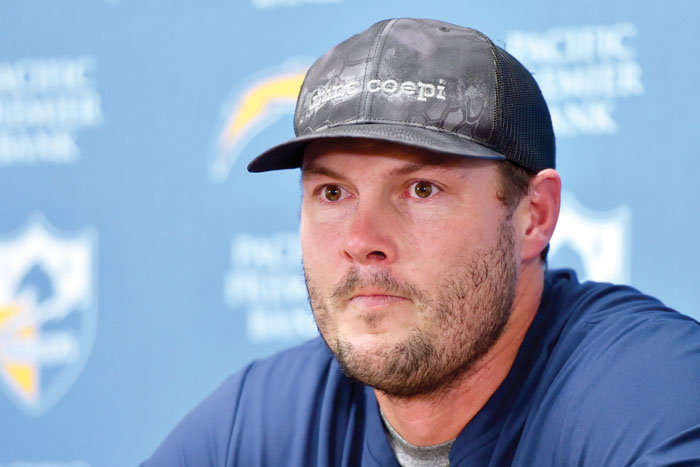 COSTA MESA, Calif. (AP) — The Los Angeles Chargers go into the offseason at a crossroads. Not only are they moving into a new stadium but they have to confront who will be their quarterback not only for next season but beyond.

Philip Rivers was at the team complex on Monday as teammates cleared out their lockers and coach Anthony Lynn gave his final speech of the season to players and staff. Rivers did not appear in the locker room during the hour it was open to reporters while his locker was mostly cleared out with the exception of a card and a pair of workout clothes.

Rivers was emotional after Sunday’s 31-21 loss to Kansas City because it could have been his final game after 16 years wearing powder blue. He threw for 4,615 yards, which were fourth in the league, but his 20 interceptions were third most and just one off tying his career high.

The only stat that matters to Rivers is the team’s 5-11 record and last-place finish in the AFC West.

“I didn’t do enough this year to help us win more football games and I take responsibility for that in the plays and the mistakes I should be responsible for,” he said.

The only thing certain for now is that Rivers intends on playing next season. Whether it is with the franchise he has called home for 16 years or another team will be sorted out over the next three months.

“Can I still do it? No question. Do I still want to? Absolutely,” Rivers said. “I’ve never been in this situation. We’ll see. I’m thankful for the 16 years and if there’s another one, I’ll be thankful for that. I think with the uncertainty there comes that unknown.”

Lynn said he would like to have Rivers back, but he is not exactly waiting for a decision before running through all the scenarios. Tyrod Taylor is under contract next season and the Chargers have the sixth overall pick in what is expected to be a deep quarterbacks class in the draft.

“Who wouldn’t want a guy with those intangibles and that production? I love what he represents and stands for,” Lynn said. “I have a lot of guys to look at, not just Phil. I’m sure it is going to happen sooner or later, but there’s no rush.”

The Chargers tied for the most wins in the AFC last season by winning close games, having a balanced offense and limiting turnovers.

This season was the opposite. Los Angeles lost nine of its 11 games by one score, didn’t have much of a running game and tied for the worst turnover differential in the league.

The seven-win decline was the worst dropoff in the league this season and the second biggest in franchise history. Lynn said he began the end of season evaluation process Sunday night and doesn’t plan on taking any time off.

“You’re 5-11, everything is on the table,” he said. “I can’t rest. There is no vacation. I can’t go on the golf course or the beach without solving this problem.”

Ekeler showed he could pick up the load with Gordon likely gone due to free agency. Ekeler was fourth in the AFC in touchdowns (11) and fourth in scrimmage yards (1,550) with most coming out of the backfield as a receiver. He finished 10 yards shy of becoming the fifth running back in league history to have a 1,000-yard receiving season.

Ekeler and Keenan Allen are the fist duo in franchise history to have 90 catches or more. Allen set a team record with 104 receptions, marking the second time in three seasons he has had 100 or more catches.

Mike Williams got his first 1,000-yard receiving season (1,001) and led the league in average yards per reception (20.1). Williams had a string of seven straight games when he had at least one catch of 25 yards or more, joining Anthony Miller and Isaac Bruce for the longest streak since 1981.

Joey Bosa played in every game after missing half of last season due to a foot injury. The Pro Bowl defensive end finished with 11 1-2 sacks and set a career high with 31 quarterback hits.

Bosa also showed he is much more than a pass rusher by coming up with huge stops in the run game.

Defensive coordinator Gus Bradley said Bosa’s biggest growth has been in the mental aspects of the game in terms of not getting easily frustrated.

14 — Takeaways by the defense, the lowest in franchise history. This is the 24th time since the merger a defense has forced 14 or fewer turnovers.

HOW TO GET IT RIGHT

Lynn and general manager Tom Telesco will both be on the hot seat going into next year. Besides solving who will be the quarterback, the Chargers need to dramatically overhaul the offensive line, which struggled without left tackle Russell Okung and center Mike Pouncey.

Pouncey, who did not play in the final 11 games after having neck surgery, said he is optimistic about returning. If he does, both guard spots need to be addressed along with right tackle and finding depth at left tackle.

The Chargers also have needs at linebacker. Fourth-round pick Drue Tranquill was the team’s best rookie, but they are still lacking depth at the position as well as at cornerback and defensive line.

The more immediate concern is who will be the offensive coordinator after Ken Whisenhunt was fired at midseason. Shane Steichen did a solid job, but the team was still beset by struggles in the run game.

With the Chargers moving into SoFI Stadium and already concerns about attendance, Telesco and Lynn are going to need a banner offseason to prove the franchise is more like the one that made the playoffs in 2018 instead of the one that consistently came up short in 2019.