Christmas in Village Park brings visitors from near and far 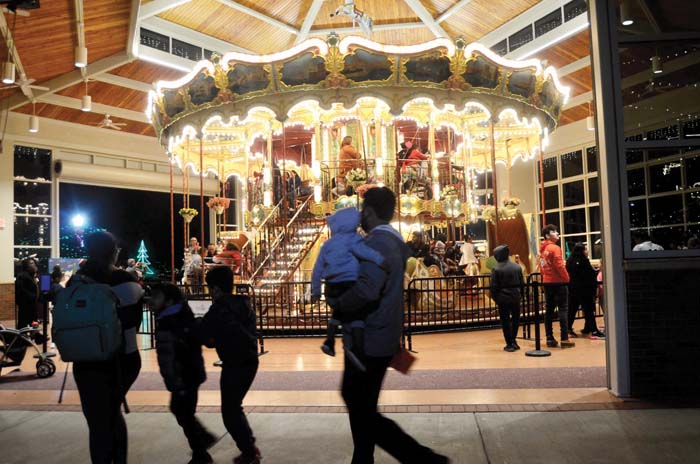 The carousel ride is always one of the highlights for many families who attend the Christmas in Village Park. Shavonne Walker/Salisbury Post

KANNAPOLIS — Around the Christmas holiday, Nate Worthy typically plans something for his grandchildren to do while they are in town.

This year was no different as the family had delivered meals to those in need and spent Saturday in Kannapolis for the Christmas in Village Park event.

Worthy attended with his grandchildren — Kian Garcia, Sorina Garcia, Soraya Garcia and Christian Garcia. The grandchildren traveled from Houston, Texas, to spend the holidays with Worthy. It was their first time at the annual event.

The children had plans to see and do everything while at the event, including riding the carousel and train as well as enjoying some s’mores and hot chocolate.

Caleb Chapman and his son, Damien, were also interested in S’mores and braving a long train line for a chance to see the lights throughout the park. Caleb said the two left the house after a hectic holiday. Chapman said his 5-month-old daughter and her mother were at home.

They saw the event last year and drove by, but never made it. This year, they planned to do everything available.

“I figured why not,” Chapman said.

Chapman said he’s grateful that the event continues after the Christmas holiday.

Tania Carmona attended with her daughter, Mariah, and niece, Jenalyse. It was the second time they had attended, Jenalyse reminded her aunt. Their goal was to ride the carousel and train, Carmona said.

Malissa Baxter attended the event for the first time with her boyfriend, Jerry Perez, nieces, nephews and other family members. The group traveled from the west side of Charlotte to be there and experience hot chocolate, lights and other activities. Baxter said she used Google to find something fun to do in the area and the event popped up.

Family friend, Elijah Goodson, said he enjoyed the train ride. The train ride takes passengers throughout the park to view the lights up close.

“It’s great for anyone who has children,” Perez said.

Perez said this event was great because it’s nice for families to come to see the light show and have some hot chocolate. His advice for first-timers: come early. The lines for the train and carousel were lengthy.

The Winterland Express train runs 6-9 p.m. until Monday. Attendees can ride the train through Village Park, enjoy more than 250,000 lights, make s’mores and more. Admission to the park and viewing of the lights is free; tickets to ride the train and carousel are $2 per person, per ride. Kids of all ages will be able to visit Santa in his studio each night.