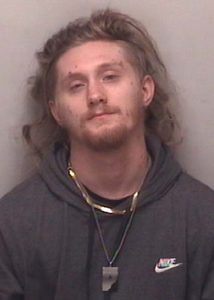 SALISBURY — A Granite Quarry man was charged with cocaine possession after police stopped him for speeding and smelled marijuana in the car, according to a Salisbury Police Department report.

Lucas Gaige Morton, 21, of the 200 block of West Peeler Street, was charged with felony possession with intent to manufacture, sell and deliver a controlled substance Schedule II and misdemeanor possession of drug paraphernalia. He has since been released from the Rowan County Detention Center under a $5,000 secured bond.

The driver was stopped in the 400 block of Grove Street on Thursday night. The officer smelled marijuana coming from the car and could see a piece of burnt aluminum foil sticking out of the driver’s pockets. He admitted to the officer that he had marijuana in his center ashtray, Police Detective Travis Shulenburger said.

The detective said the officer found an eyeglass bag in Morton’s pocket that contained a burnt white straw, a piece of foil and a plastic bag with a rock-like object believed to be cocaine.

• A man reported on Tuesday he was the victim of vandalism in the 200 block of Dan Street.

• Spectrum Cable reported on Tuesday the business was the victim of larceny from a vehicle while in the 300 block of Ashbrook Road.

• A man reported on Tuesday that someone broke into his vehicle while at the Rowan County Magistrate’s Office.

• A woman reported on Wednesday she was assaulted during a domestic disturbance while in the 1300 block of Edgedale Drive.

• A woman reported on Wednesday someone stole her vehicle in the 800 block of North Main Street.

• Damon Antone Cotton, 28, was charged on Wednesday with misdemeanor assault on a female in the 1300 block of Edgedale Drive.

• Tyler Donnet Terry, 25, was charged on Wednesday with misdemeanor assault on a female in the 700 block of West Jake Alexander Boulevard.