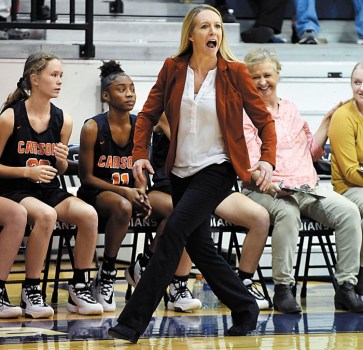 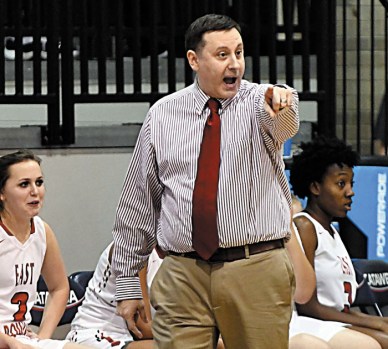 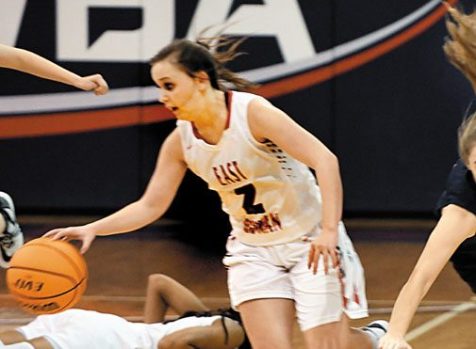 East's Madie Honeycutt is one of three seniors for the Mustangs. File photo By Wayne Hinshaw, for the Salisbury Post 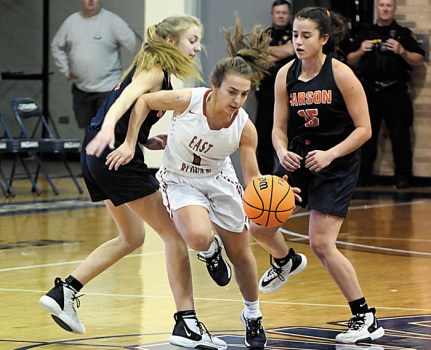 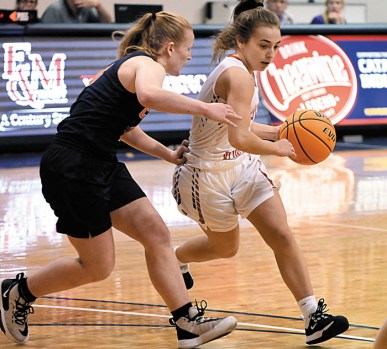 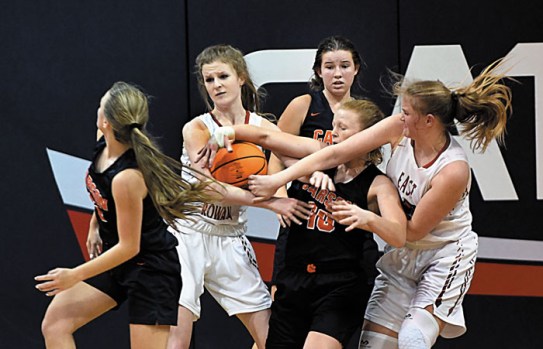 East's Leah Hinceman 11 and Carson's Lani Isley 10 in the center with the ball. photo By Wayne Hinshaw, for the Salisbury Post 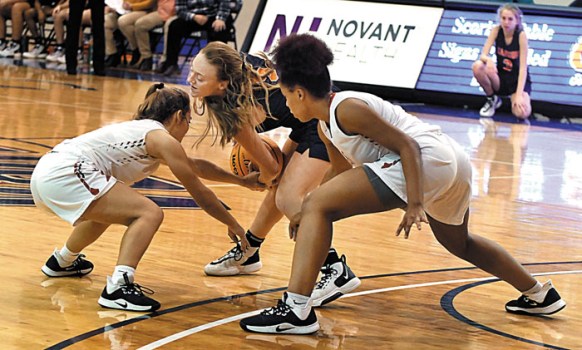 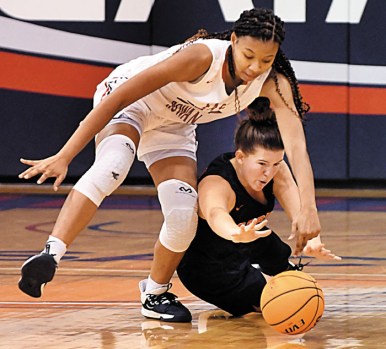 East's Haley Dalton 24 and Carson's Carleigh Perry 14 going after a loose ball. photo By Wayne Hinshaw, for the Salisbury Post

SALISBURY — With each passing victory, we learn more about the Carson girls basketball team.

Here’s what we learned in Friday’s 43-38 semifinal triumph over top-seeded East Rowan: The Cougars can prevail even when they aren’t hitting on all cylinders.

“First of all, we feel fortunate to get the win,” coach Brooke Stouder said, shortly after two-time defending champion Carson (11-1) won its sixth straight and advanced to tonight’s Dale’s/Sam Moir Christmas Classic title game. “East played extremely hard. They gave us all that we wanted and more. But I thought we showed a lot of resilience, didn’t go away and kept fighting.”

Carson had to. Previously unblemished East (11-1) had the Cougars cornered, holding a 37-32 fourth-quarter lead. With the checkered flag in plain view, the Mustangs hit an oil slick and skidded across the finish line.

“It’s a missed opportunity,” said East coach Kevin Holland. “They were definitely tougher than us down the stretch. They made the plays, they got to the line. We needed to be the ones who got to the line. We fouled, they didn’t. That was the difference.”

Carson converted 6-of-9 free throws in the fourth quarter and punched its ticket to the final, where it will meet West Rowan Saturday at 6 p.m. This was its fourth victory by seven or fewer points this season.

“We’ve got experience in close games,” senior Taylor Conrad said. “That helped us close it out.”

The game was a gritty defensive battle from the start. Carson used 3-pointers by Ellie Wilhelm and Conrad to grab an 8-6 lead after one period. By halftime, it was 19-14, Carson.

“We weren’t happy with that,” said East senior Grace Eagle. “But my girls definitely came out with heart. We just couldn’t finish it in the end.”

It was Eagle’s sharpshooting that helped East wrestle back the game’s momentum and surge in front. She opened the third quarter with back-to-back 3-pointers — one from the right side and another from deep in the left corner. Then, with 4:50 remaining in the period, she scored on a turn-around layup that gave the Mustangs a 22-20 lead.

East padded its lead in the fourth quarter, when Caroline Houpe’s back-door layup — off a lovely, pinpoint feed from sophomore Mary Spry — provided a five-point lead with 4:15 remaining.

It was Wilhelm, the junior guard who shot 5-for-10 from the field and scored a game-high 18 points, who made a pivotal 3-pointer from left side just 13 seconds later.

“I knew someone had to pick things up and make a play,” Wilhelm said. “It got us fired up.”

With only 2:01 hanging on the clock, Carson’s Colbie Perry made both ends of a one-and-one to push the Cougars ahead, 39-38. Victoria Post’s free throw provided a two-point lead before Wilhelm calmly converted three more from the line in the final minute.

“Offensively, we did not have a good game,” said Stouder. “And defensively, we went through almost all of our defenses and they weren’t good either. So on a night where we weren’t at our best, it’s a really good sign that we can still find a way to win.”

NOTES: Carson shot 13-for-41 from the floor (31.7 percent) and made 7-of-17 three-point attempts. … Conrad also drained three 3-balls and finished with 13 points. Teammates Carleigh Perry and 5-3 guard Lani Isley each had five rebounds. … Eagle paced the Mustangs with 12 points. … East will face Salisbury in Saturday’s 3 p.m. third-place game. … No. 2 seed West Rowan (9-0) advanced to the championship with a 60-46 semifinal win over Salisbury.