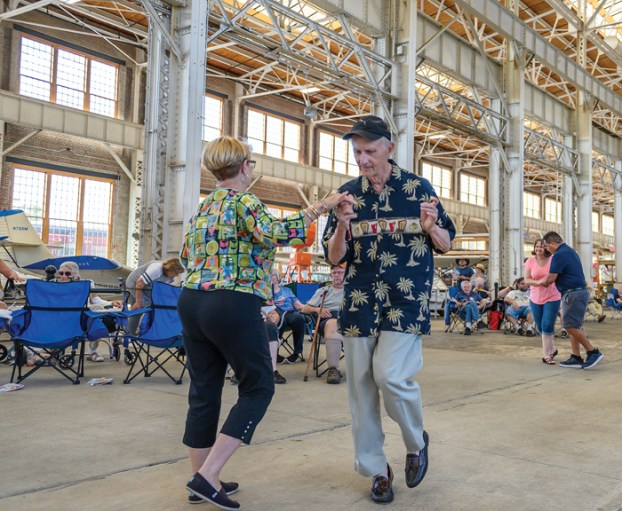 BERNADINE HERNANDEZ/SALISBURY POST Bonnie Harper (left) and Vernon Cathey dance to the music of the Salisbury Swing Band at Pops at the Post at the North Carolina Transportation Museum Spencer, N.C. 6/1/19

Pops at the Post Railway Edition 2020 will return to N.C. Transportation Museum

SPENCER — Next year’s Pops at the Post concert will make a return to the N.C. Transportation Museum.

The museum remains the temporary location for the annual community concert, as construction is ongoing at Bell Tower Green Park in downtown Salisbury. The longtime event had been held on the dock of the Salisbury Post with the audience gathering in lawn chairs and blankets in the parking lot opposite the building, near the intersection of Church Street and W. Innes Street in downtown Salisbury. It began in 2005 as a Salisbury Post 100th anniversary celebration featuring a performance by the Salisbury-Rowan Symphony, led by Maestro David Hagy.

Sponsors and donors have contributed to keeping Pops at the Post a completely free community event.

Pops at the Post board vice-chair Audrey Eudy said organizers expect the concert to return to downtown Salisbury after the park is completed in 2021.

She said they’ve already received several inquiries about the 2020 location and that the decision to return to the Transportation Museum was an easy one following the positive feedback they received from attendees and work by the museum staff, board and volunteers who helped make the 2019 Pops at the Post Railway Edition concert possible.

The Transportation Museum’s Back Shop was an appealing alternate site in part because of its large size — the building can hold roughly 2,300 people. Also, since the concert was held indoors, there was no need for a back-up location if it rained.

The planning for the event takes roughly a year, starting with a debriefing two weeks after the concert. The board and organizers discussed what worked and what needs to be addressed the following year.

Eudy said she couldn’t give away too much about the 2020 event, but can tell fans of the concert organizers are working with a group in Rowan County to make this year’s theme special.

“We already have a very exciting lineup of special entertainers,” she said.

This upcoming Pops at the Post will be held on June 6.

“We had a very successful event last year, and the folks in Spencer were super accommodating to us. The people at the NC Transportation put forth a really great effort to make the relocation successful,” said board chair Joe Morris. “We’re looking for our return in June 2021 and excited about the progress being made on the park. We’re really appreciative of all the work that’s gone into the making of the event.”

By Liz Moomey liz.moomey@salisburypost.com LANDIS — Diane Seaford started her career in local government and she is likely to finish... read more