SALISBURY — Melissa Oleen, the new director of Rowan Public Library since Jeff Hall’s retirement, was groomed to be a librarian starting in elementary school.

She grew up in a very small town in Kansas, so small the high school was closed, but it had a library, and Oleen remembers Mrs. Wilson was the librarian and kindergarten teacher. The entire library was just 1,000 square feet.

Oleen spent hours there reading. When the rest of the family went swimming, her mother would drop her off at the library, where she discovered, among other things, a complete set of Perry Mason stories by Erle Stanley Gardner.

Oleen went to a small school, Bethany College, majoring in education, but when she went to observe the classroom, she thought,”What have I done?” The librarian at the school said, “You need to be in library school.” And that’s what she did. “I just knew she was right.”

She went to Indiana University, second in the nation for its library science program. “I wanted to be in a university or academic setting.” Her fist job was at the University of South Dakota, as a bibliographical librarian — she helped people find things.

She met her husband, Doug Smith there, when he came in asking for an encyclopedia to look up information about the Eastern Band of Cherokees.

When she first moved to South Dakota, it was -14 degrees, with horizontal snow. She lived in the basement of a Super 8 motel — it was all she could afford.

She and Smith came to North Carolina after he finished law school, and she started looking for jobs. She got a job at the University of North Carolina at Greensboro. At the same time she was a sub at Rowan-Cabarrus Community College Library.  She loved her job in Greensboro, but not the daily commute.

When they had daughter Hannah, it just didn’t make sense to have that daily drive. She helped Waterworks Visual Arts Center design and build tis library. “There were 2,000 to 3,000 books, and I got it all automated and cataloged” at the previous location on Water Street.

She worked evenings and weekends at RCCC, and filled in at Rowan Public Library. She worked every Saturday. When she got a full-time offer from Rowan, as an information technology librarian, she helped to set up the library’s computers and worked in every department and all the branches. “I’ve had an office on every floor of the library,” she laughs.

She was youth service librarian, then library services director, then deputy director before taking over when Hall retired.

“Public libraries are great! The people who use them are, too. People come back because they want to, not because they have to for an assignment.” 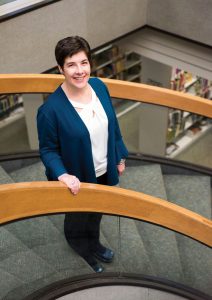 JON C. LAKEY/SALISBURY POST In November, Melissa Oleen was named Director of the Rowan Public Library, replacing Jeff Hall who was director for over 12 years.

Her goal as new director is to continue doing what RPL does well. She says the collection is excellent as well as the customer service. Oleen wants to balance the latest innovations with what the community wants.

“RPL has had a good sense of doing the newest and best, as long as it’s what people need.”

Her biggest challenge will be the new West branch of the library at the former Cleveland Elementary School. “That’s a steep learning curve. There’s so much to keep up with and so many processes to go through.”

She says the library will be a blend of new construction and services, while preserving as much history as possible. Oleeen wants the residents of the area to feel like they still have a connection to the school.

Contrary to rumors, there are no plans to get rid of print books. “There is still demand.”

The digital offerings are important, too, especially for children. Charlotte-Mecklenburg is the No. 1 library for such services, but Rowan is 15th, not bad considering its size.

Oleen says there are 82 or 83 public libraries in North Carolina, along with a dozen or so municipal libraries. “We are the best mid-size library, and we’ve had so much support, tremendous community support, a strong Friends group, and all the patrons.”

The library has benefitted from local philanthropists, Food Lion, and it all trickles down, Oleen says.

The library will help with the 2020 Census and will launch a program, 1,000 Books Before Kindergarten. Oleen wants to speak to groups, clubs, municipal boards and schools. She encourages people to call her at 704-216-8233 for speaking opportunities.

She wants to find more space for the history and geneaology archives and place for group and individual study areas.

The library is a place for the not-so-athletic, “it serves people who like reading, writing and learning.”

Favorite novel: She’s reread Jane Austen’s “Pride and Prejudice” the most. “I’ve read everything Jane Austen has written. You can’t deny how good her writing is.” She has read all the novels by the Bronte sisters, as well.

Favorite part of the library: The History Room, which she once lead. She loves the Archibald Henderson Collection and the rare books, including the Mark Catesby volumes of “The Natural History of Carolina, Florida, and the Bahama Islands,” a pre-Audobon collection of flora and fauna.

Favorite library activity: In youth services, helping Robert Jones with his RoBoJo Holiday Theater. She loved dressing up as a book cart.

Favorite movie: “Master and Commander,” because she loves the books by Patrick O’Brian, along with “Elf” and “About a Boy.”

“It is an honor to serve as the director of Rowan Public Library and I am thrilled to have this opportunity.  RPL has a history of strong directors – Edith M. Clark, Phil Barton and Jeff Hall  — and I plan to carry on that tradition.

“I will be the first female director at RPL in over 50 years.”

Public libraries are important because “They equalize access to information and support literacy which are key to a knowledgeable, progressive, diverse and economically vibrant community.”