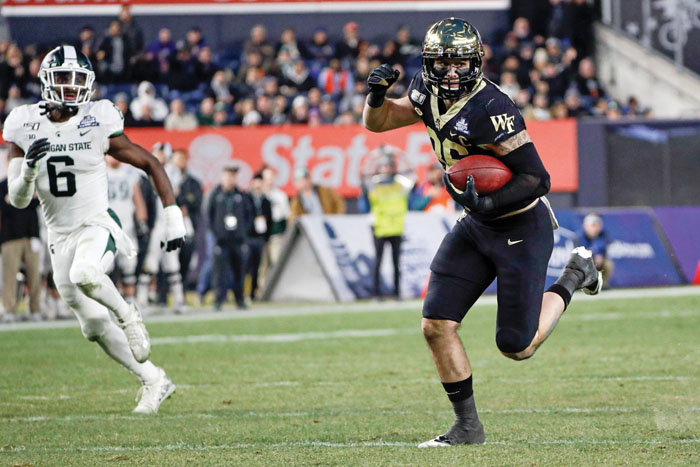 By DAN GELSTON AP Sports Writer
NEW YORK (AP) — Mike Panasiuk ripped off his Michigan State helmet and hoisted it in the air, unleashing the hidden part of his scruffy beard that’s normally a no-no at Yankee Stadium. Facial hair is banned for all Yankees, and so, for the Spartans, are the kind of acts of unsportsmanlike conduct that get a big guy like Panasiuk penalized.
The penalty was worth it for the burly Spartans defensive tackle, who rumbled 14 yards on an interception for his first career touchdown. His brother, Jacub, triggered the pick when he swatted the ball at the line. It took a bounce off a fallen player, and into Panasiuk’s hands.
“Shoutout to Mike,” Michigan State’s Kenny Willekes said. “That’s pretty damn cool to score a touchdown at Yankee Stadium.”
Brian Lewerke took it from there in his final game. Lewerke threw for 320 yards and a touchdown and ran for a score in Michigan State’s 27-21 victory over Wake Forest on Friday night in the Pinstripe Bowl at Yankee Stadium.
“When you’re a senior and you play your last football game, you want it to be your best,” coach Mark Dantonio said.
Lewerke threw a 10-yard pass to wide receiver Cody White in the third quarter to put the Spartans (7-6) ahead 27-21 and they survived down the stretch to give Dantonio his sixth bowl victory.
“As the game progressed we got more confident, we got stronger,” Dantonio said. “I think that was the difference, our attitude.”
Attitude, sure. But a defense that gave up 250 yards of offense and 21 points to the up-tempo Demon Deacons in the first half pitched a shutout in the second and surrendered just 101 yards.
“Once we got used to it, I feel like we had the game in our hands,” Panasiuk said.
Panasiuk had the ball in his hands for an early contender for wildest play of the bowl season. Wake Forest’s Jamie Newman failed to get enough lift on an early pass attempt that turned into a bit of a 4-6-3 touchdown on the Yankee Stadium field. Panasiuk’s measurements look a little like this: height, 6-foot-4; weight, 300 pounds; unkempt beard length, oh, let’s say 4 to 6 inches.
“Great play by him, a very alert play by him,” Dantonio said.
Michigan State got the go-ahead score and not much else, allowing Wake Forest (8-5) chances to win nine games for just the third time in program history.
“We felt great about our chances to win it,” Wake Forest coach Dave Clawson said.
Michigan State tried to give away the game twice in the fourth, the first time on Lewerke’s shovel pass to tight end Trenton Gillison inside the 10 that was stripped and recovered by linebacker Ja’Cquez Williams at the 6.
The Demon Deacons failed to score on the drive, and handed Michigan State another chance to seal the victory. Again, the Spartans couldn’t put it away when Matt Coghlin was wide left on a 28-yard field goal attempt with 3:03 left. Wake Forest’s last chance ended on an incomplete pass on its own 16.
White finished with 97 yards receiving and Elijah Collins had 96 yards rushing.
Dantonio said he would play multiple QBs to give the program a better feel for what it had on the depth chart to work with next season. But Michigan State stuck with Lewerke, in his fifth-year and making his 38th career start, and he responded in the clutch when he connected with White and was named the bowl MVP.
Newman did all his damage for the Demon Deacons in the first half, throwing three touchdown passes for a 21-20 halftime lead. Newman, the MVP of last season’s Birmingham Bowl, hit Kendall Hinton with a 29-yard scoring strike on Wake Forest’s opening drive and wide receiver Donavon Greene made a sensational one-handed scoring catch early in the second quarter for a 14-10 lead.
Newman connected with Jack Fruedenthal on a 44-yard play that again gave Wake Forest the lead, 21-17.
Lewerke had an 8-yard TD run and Coghlin kicked 23- and 44-yard field goals for the Spartans in the first half.
THE TAKEAWAY
Wake Forest: Snapped a three-season bowl winning streak. The Demon Deacons have had one of their most successful eras under Clawson and he credited a stout senior class for leading the way.
“I think the telltale sign of our program is we’re not happy,” he said. “We’re disappointed we didn’t get double-digit wins, that we didn’t win our fourth bowl game in a (row). I think we’re past the point of just being happy to get to a bowl. I think these guys have changed the culture and expectation level of our program.”
Michigan State: Michigan State finished the decade 92-40, a successful standard even as the program eked out 7-6 records in two straight seasons.
VOTE OF CONFIDENCE
Michigan State President Samuel Stanley, just five months on the job, gave a vote of confidence to Dantonio. Dantonio’s 114 wins are the most in MSU history.
“I think coach Dantonio has really an incredible track record,” Stanley said. “He’s the winningest coach in MSU history. So I am pleased with the direction of the program overall. The season was not what we hoped for last year, there’s no question, but I think he is the right person to continue.”
THE YANKEE KICKER
Wake Forest punter Dom Maggio tried to give the Demon Deacons a jolt with a 46.8 average on six punts.
TOTAL OFFENSE
Lewerke passed Connor Cook to become Michigan State’s career leader in total offense with 9,548 yards.
He said the game was “up there, for sure” as one of his best.
WARM UP ACT
Football in New York in December? Bundle up! Not quite. Traditionally one of the coldest bowls on the schedule, it was a downright balmy 54 degrees at kickoff and temps remained in the lows 50s for the duration, much to the delight of the 36,895 fans at Yankee Stadium.
___
More AP college football: http://apnews.com/tag/Collegefootball and http://www.twitter.com/AP_Top25