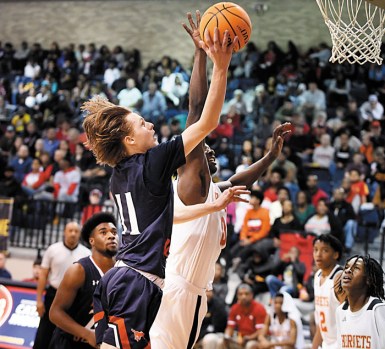 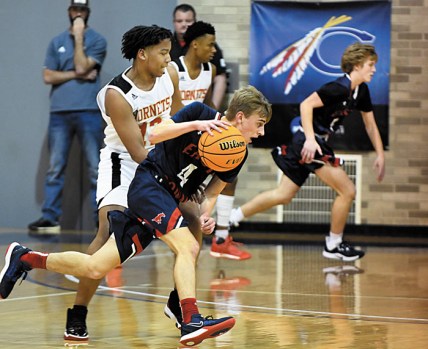 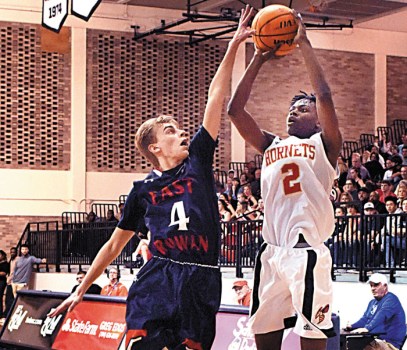 SALISBURY — Add East Rowan to the list of opponents who’ve discovered just how dangerous the Salisbury boys basketball team can be.

The upstart Mustangs, riding a wave of momentum following an opening-round win in the Dale’s/Sam Moir Christmas Classic, were no match for the fourth-seeded Hornets in Friday’s 58-35 semifinal loss at Goodman Gym.

“The better team won tonight,” said East coach Trey Ledbetter. “I’ve only been at the helm here for nine or 10 days, but coming in, I thought Salisbury was the team to beat in this tournament. I was impressed watching them (Thursday) night against West Rowan — and I was super-impressed watching from the sideline and coaching against them tonight.”

Salisbury’s victory means it will play for the championship for the third straight year. It will face A.L. Brown in tonight’s 8 p.m. finale, chasing its first title since 2010.

“It’s a big game,” winning coach Bryan Withers shrugged, just moments after Salisbury (6-2) limited East to 11 field goals — and that includes the seven the Mustangs (2-10) made in the fourth quarter. “All we’ve been hearing is how Kannapolis is going to run through this tournament. We understand they’re a great team, but we’re happy for the opportunity to play them. Win or lose, you play the game. You play it hard and see what happens.”

Salisbury played hard enough to ease past No. 8 seed East. Eleven different Hornets made the scoresheet, led by Zay Kesler’s 11 points. But to hear them talk about it, defense won this game.

“We were just on them early on defense,” said senior Jabril Norman. “The first group went out there and got them tired. The second group wore them down. There was nothing they could do.”

SHS used a swarming, arms-and-legs-everywhere defense to build a 28-9 halftime lead and extended it to 44-13 when Zay Clay sank the first of two free throws late in the third period.

“They’re strong, physical and quick,” said Ledbetter, who guided East to an upset win over top-seed North Rowan in Thursday’s opening round. “Their hands were just as fast as their feet.”

To amplify matters, East couldn’t buy a basket. The Mustangs had only three field goals by halftime. “The ball wouldn’t go in the hoop early on,” said Ledbetter. “We were getting into the paint, but when we got there it felt like a triple-team every time. When that’s happening, we’ve got to dig in defensively and get stops.”

East found a spark in the final quarter, when freshman Dylan Valley knocked down a couple of 3-balls and and teammate Jake Hunter connected from deep in the left corner. The Mustangs inched as close as 51-35 when junior Thomas Miller scored on a runaway layup with 3:16 to play.

“Our defensive rotation was really good tonight,” Withers said. “Probably some of the best rotation we’ve had the last two years. We’ve been terrible on defense this year, but the big guys are starting to see what we’re looking for. As long as they stay together and help each other, we can be a good defensive team.”

“The biggest thing today was defense and making smart plays,” Norman added. “We executed on the glass and Jalon (Walker) had four or five blocks. That helped us out.”

“They were scoring and their defense was unreal,” Withers explained. “They were moving, rebounding, rotating, drawing charges. They played with energy.”

“This was a statement game,” said Hornets’ forward Joe Witherspoon. “We know people are coming here to watch Salisbury get beat. This game tomorrow, it’s gonna be a different vibe.”

NOTES: East’s 35 points were the fewest Salisbury has allowed in a game this season and the fewest the Mustangs have scored. … Kesler has 31 points in two tournament games. … East’s Valley finished with three 3-pointers and a team-best 11 points. The Mustangs will meet Davie in today’s third-place game at 4:30.