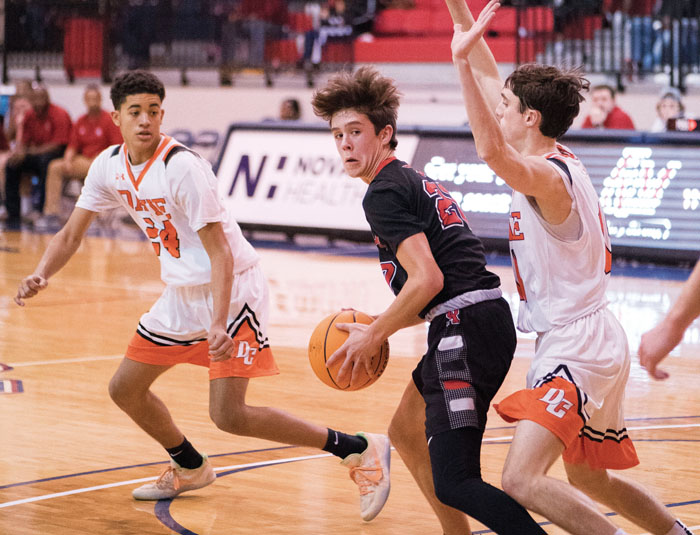 SALISBURY — Davie County’s Brooks Johnson got a step, drove the lane, and thought about trying to finish in traffic.

He’s good enough that he probably could have. But he also spotted Iverson King open on the left wing, so Johnson opted to make the kick-out. King, a poised freshman, promptly drilled the 3-pointer.

Johnson had traded a possible two for a probable three. That’s what coaches call making a good decision.

And so it went on Thursday afternoon in the first round of the Dale’s Sporting Goods Sam Moir Christmas Classic.  Johnson, the defending champion War Eagles’ only returning starter, made enough shots to score 24 points and also created shots for teammates in a 73-48 victory against South Rowan.

“It’s different going from role player to a leader and scorer, but I’ve enjoyed it,” Johnson said. “I try to get my teammates involved as much as I can.”

Johnson probably set some sort of record for points off inbounds plays. It seemed every time Davie had a side out of bounds or inbounded from the base line, someone set a solid screen and Johnson got loose for a layup or a clean look.

That’s one of the things second-seeded Davie (7-2) had talked about — getting Johnson rolling early. He’s played a lot of minutes in this tournament. It was going to be up to him to show the way.

“We felt like if I could get some open shots, get my feet set, we could score a lot,” Johnson said.

“We talked about bringing energy and excitement into this tournament, but we were sluggish in the first quarter,” Davie coach Mike Absher said.

When South’s Barrett Thompson made a jump shot for the first two points of the second quarter, South trailed 17-14 and appeared to have a fighting chance.

But the War Eagles battled for a couple of buckets inside. When Johnson swished a 3-pointer off an inbounds play, Davie had some separation at 25-16.

“Since losing to Carson in our last game before the tournament, we’ve worked mostly on execution,” Davie coach Mike Absher. “Part of that execution is out of bounds plays, and we did a nice job with that today. Brooks capitalized on his  chances. That’s what got us going.”

With 5:15 left in the half, South trailed by seven, but a 3-pointer from the top by James Reid provided Davie  with a double-digit lead. Then Johnson enjoyed quite a flurry to close the half. Davie was in command 38-21 at the break.

“Decent start, but I just don’t think we ever really had it today,” South coach Andre McCain said. “The energy, the effort, the focus, we didn’t have as much as we needed. We didn’t rebound well. We didn’t box out. We had layups, but we rushed them. We just missed a lot of opportunities and got in a hole.”

The bright spot for South was Braden Graham, who can really shoot. He made four 3-pointers and scored 26, his seventh 20-plus outing in the Raiders’ nine games. He had a four-point play on which he swished a 25-footer.

Johnson got a lot more help than Graham did, including 16 from King, who never got in a rush and just calmly made shot after shot. Za’Harre Maddox showed quickness and scored nine points. Reid and 6-4 Zach Smith, who jumps very well, contributed seven apiece.

Johnson was able to sit down with 5:55 left. He got some rest for the semifinals, while his teammates finished off the Raiders.

“We rebounded very well on the offensive board,” Absher said. “That’s an effort thing, so that was good to see. We got second-chance points and even some third-chance points.”