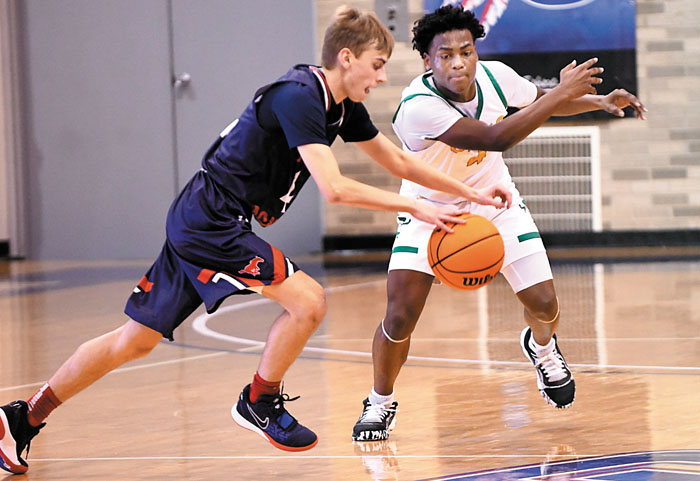 SALISBURY —  Stranger things have happened, but not all that often.

East Rowan’s interim coach Trey Ledbetter (he took over the last game before Christmas) grinned broadly and said he was looking forward to Twitter “exploding” after the Mustangs beat North Rowan, 62-54 on Thursday evening.

Explosions were a distinct possibility because eighth-seeded East Rowan (2-9) hadn’t beaten anyone since Nov. 22, while North Rowan (5-2) was the top seed for the Dale’s Sporting Goods Sam Moir Christmas Classic.

There also was the matter of the way the game began. North Rowan’s 6-foot-10 Brandon White was swatting everything East put up in the lane. There was one play inside where North actually had a massive double block — like a volleyball match had broken out. After a quarter, North led, 17-3. Yes, 17-3. That means the underdogs outscored the top dogs, 59-37, the rest of the way.

“I know we looked dead in the water after the first quarter,” Ledbetter said. “But the thing is we were getting every shot that we wanted. All we had to do was make some, but I realize it’s not easy to finish against Brandon White. You just don’t see 6-10 very much at the high school level.”

North coach Jason Causby had been there before. Five years earlier, his top-seeded Salisbury team had lost to eighth-seeded South Rowan. He knew it could happen, even if his team didn’t. He did everything he could to do prepare the Cavaliers for a battle they weren’t expecting.

“I knew East was a dangerous opponent with a lot of pieces that hadn’t come together yet, and my concern was that East’s players would be more excited to play this game than we were,” Causby said. “Yes, we did build a lead early, but I didn’t feel good about it. We weren’t playing all that well.  Then we let our guard down, and basketball is a game of runs. You can never relax.”

East’s only bucket in the first quarter was a 3-pointer by freshman Dylan Valley.

The first East bucket of the second quarter also came from the 3-point line to make it 17-6. That one was tossed up out of the left corner by baseball pitcher Jake Hunter, the East Carolina commit. Hunter was basically on his way to a perfect game — on the basketball court.

With North still in command, 25-11, midway through the quarter, the Mustangs started showing signs of a comeback. David Jordan made a 3-pointer. Thomas Miller and Vincent Jones battled hard for points. Then Cameron Padgett had a flurry of plays to end the half. North still led 30-24, but East slowly had turned the tide.

“My halftime message was that we are just as good as they are,” Ledbetter said. “I told the guys we had the heart and the guts to do this.”

Sammy Pinckney’s driving bucket with 5:43 left in the third quarter put East ahead, 31-30. Goodman Gym erupted with noise. Everyone loves an underdog.

North tried to dig in, tried to retake control, but slasher Pinckney’s surprise 3-pointer made it 40-all. That’s how the third quarter ended.

“I had the feeling that we were really playing as a team,” Hunter said. “We were hitting shots and we were getting stops. It was just a matter of believing in each other. If we did, we could win.”

Hunter is a shooter and isn’t overly quick. That’s what the scouting report says, so when he pump-faked, he dribbled right past a flying defender. The reverse layup that Hunter slid in on the baseline was probably the shot of the game. It gave East a 42-40 lead early in the fourth quarter, and the Mustangs wouldn’t give that lead up.

Hunter’s 3-pointer made it 45-41, and if he was old enough he would’ve been voted mayor of Granite Quarry. He wasn’t done. He went out of his mind. He let loose with another 3-ball for 48-41 with 4:12 remaining, and the Cavaliers were reeling.

“They made a really good run at us, and we just didn’t respond,” Causby said. “You have to respond.”

East closed the upset with everyone pitching in. Three different guys took charges as increasingly desperate Cavaliers tried to soar to the rim.

When North missed jumpers, Hunter or Padgett grabbed the rebound. No one could have anticipated one-and-done North possessions against East, but it was happening.

Gavin Sprinkle and Landon Shuping made clinching free throws down the stretch. Jordan only scored four points, but he turned in a terrific game, making sound ball-handling decisions, rarely turning it over.

Ledbetter had praise for all the Mustangs, He also saluted his friend, Kurt Misenheimer, who resigned as coach seven games into this season.

“Kurt did the work and laid the foundation,” Ledbetter said. “I was just the guy who happened to be on the sideline tonight, but what a win this is for our kids. I’m still trying to learn all our guys’ names, but it would be hard to dream up anything better than this.”

North got a nice game from Denerio Robinson, who scored 15 points. Zay Davis hit a late 3-pointer to finish with 12.

East will provide the opposition tonight against fourth-seeded Salisbury in a 7:30 p.m. semifinal.