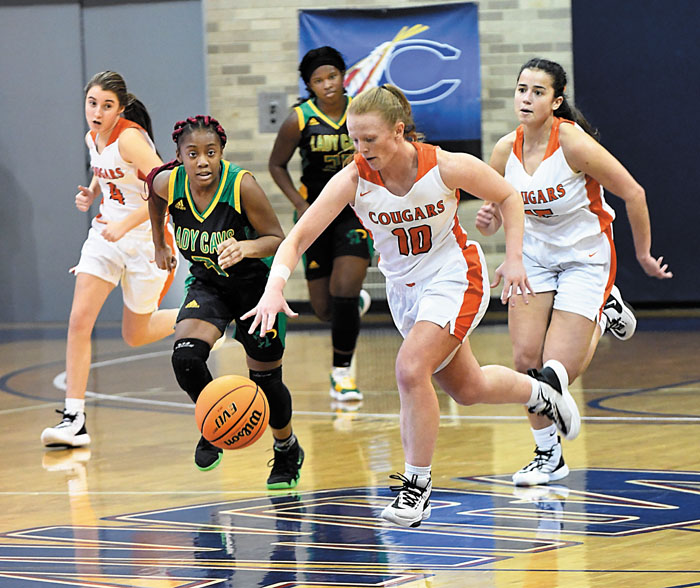 The Cougars scored the game’s first 12 points and strolled to a 77-33 first-round victory over North Rowan in the Dale’s/Sam Moir Christmas Classic.

“We talked about getting off to a good start,” coach Brooke Stouder said, moments after defending champion Carson (10-1) hurdled into today’s semifinal round against East Rowan. “That’s really important to us. We talk a lot about winning the first four minutes and setting the tone early.”

Carson’s press defense forced 12 early turnovers, helping the Cougars open a double-digit first-quarter lead. When they launched the second with a 14-0 scoring spree, the lead ballooned to  30-5 with 4:51 remaining in the half. “I was thinking our second quarter was better than our first,” Stouder said. “We made just a couple of small changes to our press.”

“It just wasn’t a good night for us,” losing coach Lamar Wilkerson said. “We had the jitters. We couldn’t handle their defense. We made too many mistakes.”

“I think we came out really strong,” said forward Carleigh Perry, a 5-9 junior who provided eight points and eight rebounds. “You can’t underestimate anything in the Christmas tournament. You have to look at every team like they can beat you.”

No one did more damage than her cousin, junior guard Colbie Perry. She shot 6-for-10 from the floor, netted a game-high 16 points and drained four of her six 3-point attempts.

“I like to shoot the 3-balls,” Colbie Perry said. “Every time I shoot one, I feel confident, like I know it’s going in. But I have to thank my teammates, the passers. They get me going, get me opportunities.”

Carson finished 10-for-21 from beyond the arc. Junior Ellie Wilhelm added 11 points and sophomore Aliayah White contributed 10 off the bench.

“Colbie was hot early,” Stouder said, after Perry drained three long balls in the opening 12 minutes. “She’s a good shooter. She can do that. It was good for her confidence and good for our team.”

Stouder knows the Cougars wear an inviting target as they move into the semifinals, where three undefeated squads await. Carson advances carrying its second five-game winning streak of the season.

“We don’t really care what seed we are,” she said. “The only difference between being a one-seed and a four-seed is your first game. You’ve got to win the first one, then start picking them off one at a time.”