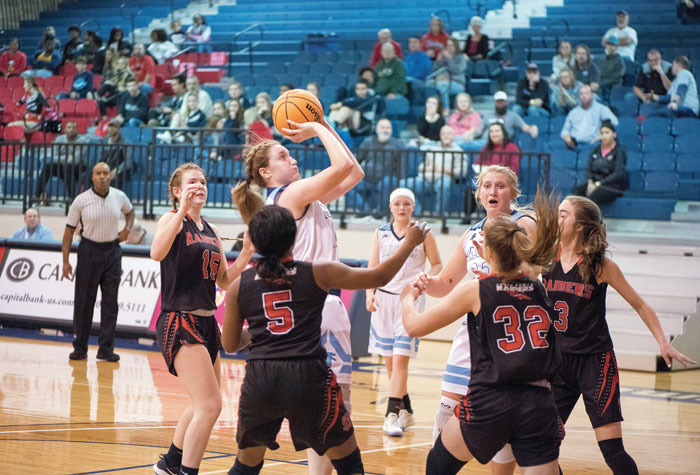 Senior forward Abigail Wilson had scored 20 of the Falcons’ 30 points, as they led by 15.

However, that notion was dispelled in the third period as guards Taylor Poole, Gabby Blabon and Cindy Connolly got going from long range. The end result was a 31-point quarter for West and a 65-26 rout of the No. 7-seeded Raiders.

The Falcons (8-0) made 10-of-15 shots from the floor during the torrid third quarter, as Poole drilled three 3-point baskets and Blabon added two more from behind the arc.

Poole scored 11 of her 14 points and Blabon scored all of her eight points in that big frame for West. Wilson added eight points, Connolly two and Whitley Arnott dropped in a basket as the Falcons took a 61-23 advantage into the final quarter.

“We made some adjustments at halftime, how we were moving without the ball,” said West coach Ashley Poole. “We relied too much on Abigail inside in the first half. Once we opened it up outside a little bit, the girls executed well and got into some transition offense, too.”

The Falcons were a little slow out of the gate, even with five seniors in the starting lineup.

“Everyone was a little jumpy at the beginning, but it’s the Christmas tournament,” added Poole. “But we found our rhythm in that third quarter, ran the floor well and picked it up on defense some.”

A 40-point lead and running clock then ensued in the fourth period the runaway soon ended.

Wilson, a UNC-Asheville signee, led the way with 28 points and 17 rebounds. She made 11-of-20 shots, mostly from the paint, and 6-of-8 from the free throw line.

As a team, West shot 44 percent from the floor (24-of-54), not bad for a high school team playing its first game this season in Goodman Gym, where the shooting background is a little different.

The Falcons were even better from behind the arc, connecting on 7-of-15 three-point attempts (47 percent).

In addition to the scoring of Wilson, Poole and Blabon, Connolly finished with nine points and five rebounds.

The Raiders’ new young head coach, former Carson star Alex Allen, who just graduated from Lynchburg College last May, knew that South would have an uphill climb against the veteran West team.

“We’re a young team and fairly new to one another,” said Allen. “It’s a different system that we’ve brought in. We knew there would be a learning curve with it  and I didn’t expect it to go smoothly.

“But today, we came out and played hard and I can’t fault them for anything if they battle like that,” continued allen. “That’s all I can asked for, the girls’ best effort. This game showed us some things to work on, but that’s should be the case for every game — learn from it.”

Allen now has a game under her belt in the big holiday event, one that she played in four times with the Cougars.

“It was different,” Allen said, about coaching in the Moir. “There’s always a lot of energy in the Christmas tournament and it’s a fun environment. Getting to see the coaching end of it was a special experience for me. It’s nice to be back here in a different role.”

Poole acknowledge that the Raiders fought the Falcons to the end.

“Give credit to South for playing us hard,” she said. “We just had to make sure that we were doing our jobs well and keeping our composure.”

NOTE: West plays today at 3 p.m., against No. 3-seed Salisbury, in the first girls semifinal.