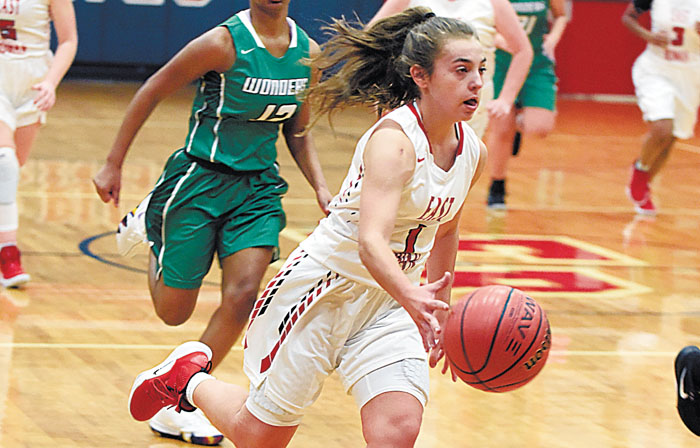 Wayne Hinshaw file photo/for the Salisbury Post ... East Rowan’s Adalie Harrison, shown during a game from last season, scored 13 points to lead the Mustangs past Davie County, 64-24, in the first round of the Dale’s/Sam Moir Christmas Classic, on Thursday at Goodman Gym.

SALISBURY — The game itself was unremarkable, but East Rowan made history on Thursday afternoon when it overwhelmed Davie County, 64-24.

But nothing came close to going wrong in a one-sided affair in the first round of the Dale’s Sporting Goods Sam Moir Christmas Classic. The top-seeded Mustangs led the eighth-seeded War Eages, 15-0, midway through the first quarter, and that was that.

“We were able to put some pressure on them and we got turnovers,” East coach Kevin Holland said.

Most of the buckets were easy. A Grace Eagle layup, an Adalie Harrison steal/breakaway and a Caroline Houpe put-back came in a flurry and knocked the War Eagles back.

Holland had preached getting a fast start. Davie (0-10) probably has the youngest team in tournament history — 10 freshmen are on the 15-girl roster — so a quick East start wasn’t much of a problem.

“We wanted to get going early,” Harrison said. “A lot of times, it takes us half the first quarter to get started, but the press really helped. We were getting steals and layups right away.”

By the end of the first quarter, East led 20-5. Haley Dalton and Mary Spry, aggressive post players, caused some pain in the paint in the second quarter for Davie. By halftime, the Mustangs led, 38-9.

“We’ve got a unique mix of experience (three seniors who are four-year starters) and size (a sophomore 6-footer and two freshmen 6-footers),” Holland said. “I believe we’re a very good team. I just want us to be more consistent. I still think we’re settling sometimes for being good enough, instead of pushing for more.”

East missed a lot of layups. That was the bad news. The good news was that the Mustangs shot an incredible number of layups. They got those layup attempts by pushing the ball, by sharing the ball and by hitting the glass. All those things are very positive things.

“You hate to not make every layup,” Holland said. “But at the same time, you know you’re not going to make them all. We have shot 50 percent on two-pointers for the season, and it’s important for us to remember that.  We can’t fall in love with the 3-point line because we’re 20 percent from there.”

East backed off the press after halftime, but still limited Davie to eight points in the third quarter.

“Our defense has gotten a lot better,” Harrison said. “We’ve got a lot more size out there now than we used to.”

A 3-pointer by Madie Honeycutt gave East a 57-17  lead as the third quarter ended, and the fourth quarter motored by swiftly with a running clock.

Harrison scored 13, while Dalton and Spry had 12 each for East. Nine Mustangs scored, including Nora Ali, who made a shot from the base line for East’s final points.

Harrison, sort of a 5-foot-1 Energizer Bunny, was at the heart of most of the good things that happened for East, orchestrating the offense and triggering the defense.

“She’s played every game for four years for me, so she probably knows what I’m thinking before I do,” Holland said. “She’s usually going to be the quickest person on the floor and the best ball-handler on the floor. That wasn’t necessarily the case when she was a freshman, but she’s worked hard to be the player she is now.”

The challenge will increase dramatically for East in today’s 6 p.m. semifinal. The Mustangs will take on defending champ Carson (10-1).

Davie will be in the noon consolation game against North Rowan (6-3).