‘Challenge we work to overcome’: Knollwood principal leads by example 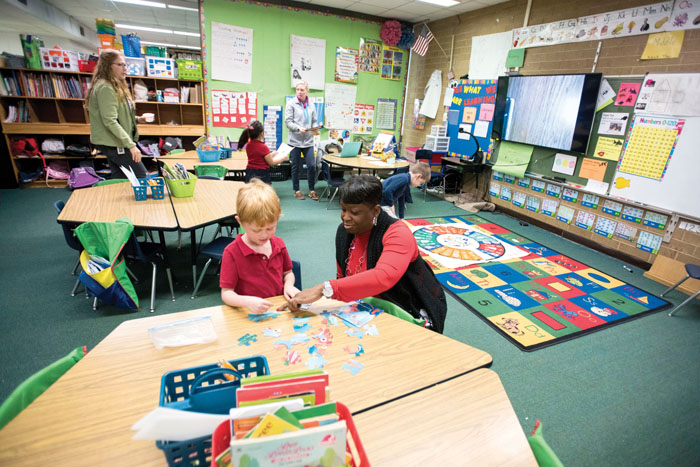 It’s impossible to discuss education with Principal of the Year Shonda Hairston without absorbing a little of her enthusiasm, yourself.

She leans forward. Her intense brown eyes sparkle. Her voice becomes more animated and yes, a little louder. She uses words like, “magic,” “beautiful” and “trust.”

“I see students who will believe and know that they can,” Hairston says. “We are working to plant those seeds of possibility, helping them to understand it is possible to do the things you want to do in life – be what you want to be.”

Hairston has served as principal at Knollwood Elementary for 12 years. While attending Salisbury High years ago, she was inspired by two teachers, Charles Hellard for math and Gail Holmes for computers, to go into teaching. Both, she says, had individual styles and connected to their students.

Hairston has now been an educator for 26 years. She earned her bachelor’s and master’s degrees from UNC-Charlotte. She taught for five years at Corriher-Lipe Middle School and six at Knox Middle School. Then, she served as an assistant principal at Salisbury High for three years.

SHS principal Windsor Eagle empowered her as an assistant principal, Hairston says, giving her a variety of responsibilities. He trusted her with departments, curriculum and the school improvement plan. Then, she got the call to serve as principal at Knollwood Elementary.

“I felt emotional at leaving and told Windsor I felt I had unfinished business at SHS,” she says. “I felt rooted there, having attended and worked there. I was very appreciative of his support. If he believed in you and trusted you, he let you do. He gave me a lot of insight into the role and helped prepare me for it. He was encouraging, and said, ‘You’re ready.’”

The biggest challenge at Knollwood, Hairston said, has been overcoming the image portrayed by test scores. They’re doing great things inside the walls, she says, but it doesn’t show on paper.

“Sometimes the perception a school has is a challenge to tell our story. That’s the challenge we work to overcome,” she said. “We just keep at it – working to grow and improve. We want to do better and want our students to do well. It’s a challenge to let people know we are a good school, with good kids, good teachers, amazing parents.”

When the school district began the renewal process, Knollwood was one of the first to declare its path. Using funds from unspent categories, Knollwood invested in “expeditionary learning.” Every student in every grade level goes on field trips associated with the curriculum. Younger students have gone on more simple trips – fishing, for example. Older kids have visited the mountains or the beach. Last summer, 20 fourth and fifth graders, staff and some parents visited New York City.

Students were required to create a project to be selected for the trip, answering questions such as “why would we go?” and “what does New York symbolize?”

“To go all these places and be part of their experience, I cannot put into words,” Hairston says. “Seeing their reactions, their joy, their excitement and learning, has been amazing. To watch them in the city of New York, I can’t even describe. The feelings they had, the feelings we all had – it was one of the best experiences ever.”

Another experience was taking third graders zip-lining at the U.S. Whitewater Center near Charlotte.

“My teachers had to sell me on that one,” she laughs.

Hairston had told teachers the end of the previous year to find an experience that met three criteria: it must be connected to the learning standards, had to have a ‘wow’ factor and must be hands-on. Teachers tied it to math and science with force and motion, then character building with perseverance and teamwork.

“We talked about no fear,” she says. “Watching them complete it, and then say, ‘I did it, Mrs. Hairston!’ – it was a pivotal point in their lives, and in my career.”

Each expedition starts with a launch at Knollwood. Teachers explain why they are going to this particular place, and the following days are filled with poems, assignments and figurative language to build excitement and prepare.

Hairston says, with a high poverty rate in her school, many students and some parents have never left Rowan County. The expeditions broaden their experience and allow them to be on level footing with higher income, more experienced students as they progress through school. The trips help students make connections and have experiences, she says, not just reading about them. Every expedition, Hairston says, has an academic skill and a life skill.

Hairston chuckles when asked if she might be more hands-on than other principals.

“I don’t want to be just the leader,” she says. “I want to be part of the team. I will write lesson plans. I will teach classes. I want to lead by example.

I hold myself to a high standard, and I hold them to a high standard. I like being clear with expectations but giving freedom to work within those bounds. When I go with students on expeditions, I will say, ‘Okay, let’s stop here and see this.’”

One expedition that afforded that opportunity was a fourth-grade trip to the Outer Banks. It was the off-season, and the school group had the hotel virtually to themselves. Hairston took the opportunity to talk about the economy and community revenue. She had the students think of events the Outer Banks could host in the off-season to generate revenue. They plan to forward the ideas to the Chamber of Commerce.

As passionate as Hairston is about education, she is equally passionate about her two sons — Jamarius, age 19 and Kenyon, 13. One is a bit of an introvert, she says, and one is an extrovert. She takes several minutes to talk about what they’re doing, and what their strengths are. She’s clearly engaged with their day-to-day lives.

Every year at Knollwood, Hairston comes up with a theme and a song for the expeditions. This year, she asked the students, “What are we trying to accomplish with these expeditions?”

“One class said, ’Don’t be afraid to discover the world! Be curious!’” Hairston said. “Another said, ‘Have open eyes, an open mind and heart.’” She leans forward. “Do you see? They get it. Seeing that in all the grade levels come together. That is beautiful.”

Hairston asked the students, “Does being curious apply to you when you graduate?” and they said, “Yes.”

She asked them, “Does it apply when you are married and have a family?” and they said, “Yes.”

Her eyes fill with tears as she tries to explain the possibilities this has opened for them.

“I don’t take lightly that we’ve been entrusted with young minds and hearts,” she says. “We have the ability to change the world. I’m not sure people realize the power in that. I recognize it.

When I’ve been able to work at all levels, elementary, middle and high, I’ve been afforded the opportunity to see them come in with this sparkle and this light, all the way to walking across the stage into the world. How have we prepared them to go into a world in whatever they choose to do? It’s not just academic skills but teaching them to be good people.”