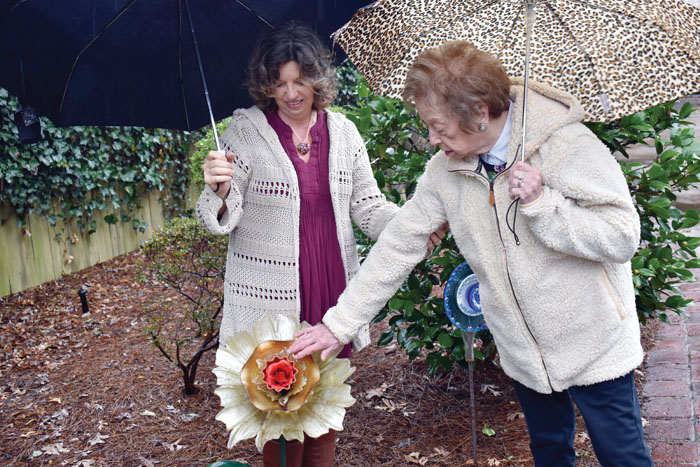 Caregiver Debbie Frechette and client Betty Lomax admire some of the glass flowers they’ve made together that are in Lomax’s yard.

Caregiver Debbie Frechette says she would visit Betty Lomax every day if her schedule allowed.

The two were paired up over a year ago and formed a bond that goes beyond caregiver and client. They are more like friends who embarked on an artistic journey together.

Lomax is a well-known name in Salisbury. Betty’s late husband, Bobby Lomax, worked as a dentist at the VA Medical Center in Salisbury before opening his own practice in 1962. He eventually joined three other partners in a two-story building on Statesville Boulevard, where he practiced for more than 20 years before retiring.

Betty Lomax was an assistant professor in physical education at Catawba College, and her husband endowed a scholarship in her honor in 1992.

The Community Care Clinic in Salisbury dedicated its dental lobby to the couple as a thank-you for their continuous generosity to the people of the city in 2017.

Bobby Lomax passed away last year at the age of 90, and in his absence 93-year-old Betty Lomax found new companionship with a fluffy, four-legged friend named GiGi and her Trinity at Home caregivers.

Trinity at Home is a program of Lutheran Services Carolinas, a nonprofit ministry serving North and South Carolina, which offers home care in Rowan County. Based on the campus of Trinity Oaks, the program offers personal care and support services that allow older adults to stay comfortably in their own homes.

Trinity at Home gives people a plan tailored to their needs. In Betty Lomax’s case, she says that Frechette is more than just a caregiver; she’s a friend.

Lomax has always been a whiz at crafting. Frechette said Lomax gave her friends handmade Christmas gifts almost every year. That’s why when her niece brought her a glass flower from an artist in Virginia, Lomax decided to learn to make her own.

“So she brought me one of his works and I said ‘Ooh, I think I can do that.’ And Debbie said she could do it. She doesn’t say no to anything,” Lomax said. “So I started. We had to experiment at first.”

The flowers are made by gluing three or four plates together, along with other kinds of serving dishes and glass trinkets that Lomax and Frechette find at thrift stores.

“We will go to thrift stores and look for dishes that look pretty and fluted; something that looks like a flower,” Frechette said. “Because Betty says that at the end we want to overall look at it, and ‘Does it look like a flower?’ is the question we are asking ourselves.”

After Lomax picks out the plates and arranges them to her liking, Frechette is responsible for gluing them together.

“When you look at a rose, you see some petals outside and inside, and that’s what we are trying to reproduce. And we use everything,” Lomax said. “People bring things to me they think I might like and they don’t want anymore, and somebody brought me a whole jar of marbles. They were all different colors and we might put those around the edge of the thing. Somebody else might bring some small flowers that could be glued, or they might be put in the bowl in the center to make it look more real.”

The pair have made about 28 flowers so far. Some are proudly displayed in the yard of the Lomax home, some were given as gifts, and four are in the garden of Trinity at Home.

Lomax donated the flowers to the Trinity at Home office to show her appreciation for her caregivers.

“We picked nice big ones,” Lomax said of the ones at Trinity at Home. “They look really good outside.”

Frechette has learned a lot about art from Lomax, and is even currently working on new faux stained glass project. She created a piece for her Lomax, which now hangs in her bedroom at her home in Salisbury.

The pair say they’ve learned a lot from each other during their short time together and don’t plan to stop making flowers anytime soon.

“It keeps me busy and it’s simple. So when you’re sick you can still do it,” Lomax said. “That’s why I like to do it.”

Teresa Dakins, Trinity at Home community outreach coordinator, said caregivers are encouraged to give their clients meaningful experiences and to try to let them do the things they enjoyed before they needed assistance. Lomax and Frechette are the perfect example of that.

“Sometimes our caregivers and clients discover new interests that they like to share with each other,” Dakins said. “It is such a warm feeling when a family calls to tell you that because of our caregivers, their loved one was able to stay home and thrive until the end of life or that because they have a caregiver, they are doing better than ever.”