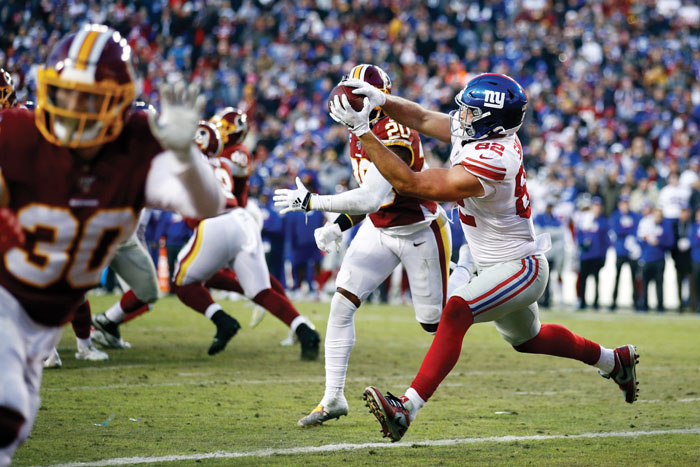 Here are two elements of the NFL’s 10-minute overtime that deserve re-examination by the league during the offseason.

Both are exemplified by games on Sunday, when the Giants beat the Redskins 41-35 and the  Dolphins downed the Bengals 38-35.

The first is the age-old problem of the coin toss determining far too much. The Giants won it, took the kickoff and marched 66 yards in 11 plays, capped by Kaden Smith’s 3-yard touchdown reception from Daniel Jones. Game over — for the fourth time in eight OT games this season.

Should it have been? The NFL believes so because, as the 2017 Super Bowl proves, nothing was changed in the rules to equalize overtime after the Patriots won the championship with an OT drive. The Falcons lost the coin toss and never saw the ball again.

Sure, it can be argued that the defense should be able to make a stop. Well, the Patriots defense in that game — or the Giants D on Sunday — also should have to show it can make a stop.

The rule calling for a team allowing only a field goal on the first possession to get its chance on offense, passed in 2012, helps a bit. But not enough.

Then there’s the reduction of overtime from 15 minutes to 10. That was done in 2017, in part for television, which doesn’t want NFL games lingering too far beyond a 3-hour, 15-minute or so window. It also was done for player safety, which always must be an important consideration.

Miami’s Jason Sanders kicked a 37-yard field goal at the end of the 10 minutes to win it over Cincinnati. Fine and good.

What about the possibility of a team taking the opening kickoff of OT, marching relentlessly downfield, using up the full 10 minutes and kicking a field goal for the winning points? There are enough 10-minute drives (not 15-minute series) during a season to make that an unfair possibility. Why? Because the team that lost the coin toss never got the ball even though it yielded only a field goal.

The likelihood that anything changes for overtimes is slim, and the league will cite all kinds of evidence supporting the status quo. We wonder if fans feel the same way?

The Arizona Cardinals have gotten more attention this year than in any since they had Kurt Warner leading them into contention and then to a Super Bowl. Top overall draft choice Kyler Murray has been responsible for that.

The guy who needs more headlines is linebacker Chandler Jones.

After getting four sacks of Russell Wilson in Seattle, he established a single-season franchise record with 19, topping the 17 he had in 2017. Jones now has 60 sacks in 63 career games since joining the Cardinals. He also has 96 for his career.

Jones had six tackles, four sacks, two tackles for loss, two forced fumbles and a career-high six quarterback hits in the win over the Seahawks. He leads the NFL with eight forced fumbles.

“If we had a better record he would be in that conversation for defensive player of the year,” Kingsbury said. “He should be, he’s phenomenal. Anytime it’s a one on one, there’s a good chance he is going to get home. He is a tough matchup for anybody.”

The Ravens, Texans and Bills are in odd positions for this final weekend of the schedule. They all are in the playoffs — Baltimore and Houston have won their divisions. The Ravens are the AFC’s top seed and the Bills are fifth. Houston is the AFC South winner and could sneak up from No. 4 to No. 3 should Kansas City lose at home to the underwhelming Chargers while the Texans take down the Titans.

So all of them could sit key players, especially those ailing. But that could have a major effect on who gets the final wild card in the conference.

Pittsburgh is at Baltimore, and there is no love lost between the Ravens and Steelers, of course. The Steelers must win to have a shot at that wild card, and while Baltimore has been the NFL’s best team, i t won’t have its full repertoire on Sunday as star quarterback Lamar Jackson and running back Mark Ingram will sit. Certainly it would be satisfying to keep an archrival from playing in January. At what potential cost, though?

The Texans have a similar situation with the Titans, who will earn that wild-card spot with a victory no matter what the Steelers do. Houston has a slightly hobbled quarterback in Deshaun Watson, for example. Most important is having him healthy for wild-card weekend.

Coaches tend to approach such scenarios in varying manners. There’s no simple answer.