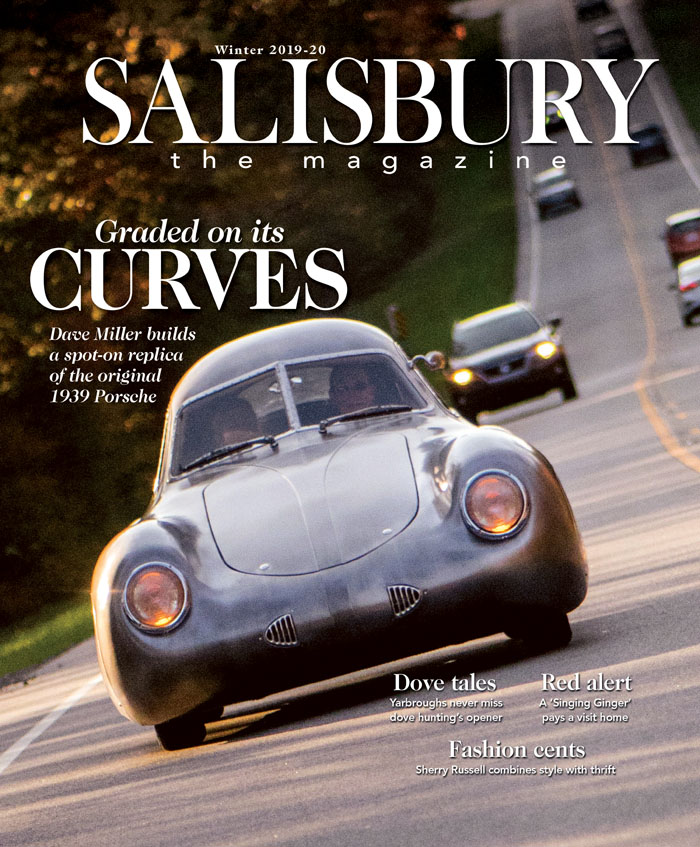 SALISBURY — Just in time for the new year, the Winter 2020 issue of Salisbury the Magazine has reached subscribers and is available at locations throughout Rowan County.

The magazine, a publication of the Salisbury Post, also can be picked up at the Post, 131 W. Innes St.

The cover of this 40th edition of Salisbury the Magazine features a replica of the 1939 Porsche Type 64, which Dave Miller at Copacetic Metal Shaping in China Grove took five years to build.

It’s a rare replica of an even rarer car, often described as the granddaddy of all Porsches and many of the sports cars to come.

This issue also goes dove hunting in the fields of western Rowan County with the Yarbrough clan. Tommy Yarbrough and his son, Mark, have hunted together on the first day of dove season for 50 years, so they have plenty of stories to tell.

Tommy’s grandson Will and granddaughter Charlotte have kept up the family tradition with them.

In the vein of another 50-year milestone, Linda Dukelow has been the woman behind Textile Products for half a century. She has lent her expertise and advice on window treatments, materials and home decor overall since she started working for Norman’s Co. in 1969.

The magazine catches up with Dukelow at her downtown Salisbury store.

In personal fashion, rather than home fashion, Deirdre Parker Smith introduces readers to Sherry Russell, a style maven who shows how looking chic doesn’t have to break the bank.

Contributing writer Kris Mueller gives an update on the flourishing career of singer Ginny Weant, who came home recently to perform with her Canto Zenzero trio. Weant got the start on her entertainment career as a young performer in Piedmont Players productions and the theater program at Carson High School.

Michael Kirksey is the local guest artist for Salisbury’s the Place.

Photographer Jon Lakey shot the images for all the features, plus provided the Through the Lens photo.

Scene photos in this issue were taken at Autumn Jubilee, the Southern Soul Festival, Community Thanks, the Big Chili Cook-off and the Trinity Living Center dance.

A calendar offers and information dates on coming events in January and February.