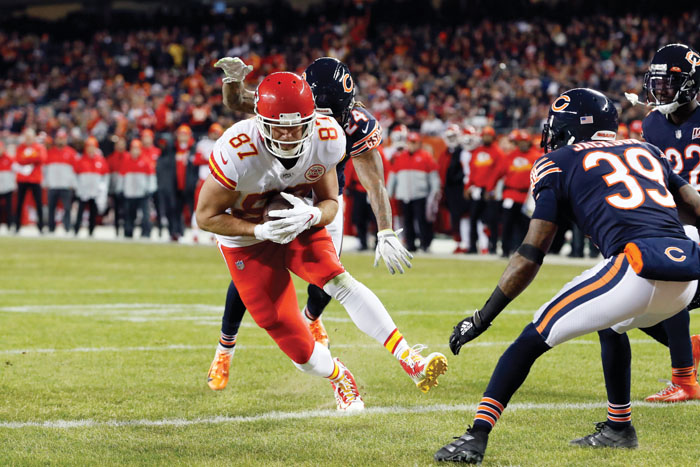 KANSAS CITY, Mo. (AP) — There is an old tale that pops up from time to time, parts of which Chiefs coach Andy Reid still disputes, about a phone call he made to Travis Kelce when Kansas City selected the tight end in the third round of the 2013 draft.

They had a nice chat. Reid welcomed Kelce to the team, explained how he envisioned him fitting in. Then, Reid offered a warning: “Don’t screw this up,” he said, at least according to the story.

It made sense, too. Kelce put together a brilliant college career at Cincinnati, but the brother of longtime NFL center Jason Kelce also had run into some trouble. He was suspended the entire 2010 season for what the Bearcats called a violation of team rules, which turned out to be a failed drug test for marijuana, and many questioned his maturity.

“You have to understand that I knew Travis before we took him. I had his brother (with the Eagles) and he came to visit his brother all of the time,” Reid said, explaining that infamous draft-day phone call nearly seven years ago. “I didn’t ask if he was going to screw it up, or tell him that he was going to screw it up. I just said that you know how I operate, and welcome aboard — and that I’m probably not going to be the easiest on you. He said, ‘I got it.’”

Did he ever get it.

After missing most of his rookie year because of microfracture surgery on his knee, the athletically gifted ex-quarterback has made everyone who played a part in drafting him look like a genius. Kelce already has become the first tight end in NFL history with four consecutive 1,000-yard receiving seasons, and with eight catches for 74 yards in last week’s 26-3 romp in Chicago, he became the first with back-to-back seasons of at least 1,200 yards.

Kelce also eclipsed 500 receptions in just his 95th game, beating Hall of Fame tight end Kellen Winslow’s record for their position by a full six games and setting a standard that should be tough to beat.

“It tells everybody that I’ve been pretty fortunate to be on the field the past four years,” Kelce said with the self-deprecating style he’s adopted during his career.

Asked why he’s become so difficult to handle, he replied: “I think it’s just the Kansas City barbecue seeping through my pores. It makes me a little slippery when I’m out there.”

Kelce isn’t the fastest player in the league, nor is he the quickest or strongest. He doesn’t have the best hands, either, with his share of drops along the way. But he might just be the best player in the league regardless of position at finding holes in the defense, and his ability to squirm away from defenders to get yardage after the catch is downright uncanny.

“Just how consistent he is on a game-to-game basis, it’s truly special,” said Chiefs quarterback Patrick Mahomes, whose own record-breaking numbers are owed in part to Kelce’s play.

The reason for that isn’t just the numbers, though. That young and carefree and occasionally reckless kid who got into trouble in college has grown into a consummate leader, the guy that helps to set the standard in the locker room and rallies the rest of the team around him when they take the field on Sunday.

It’s why the Chiefs gave him a five-year, $46 million contract extension in January 2016.

“He has grown up tremendously,” Reid said. “The talent was always there, it has always been there. He is very gifted. He has a great feel. He loves playing the game. Then, he has been on the other side of it. He has been a quarterback, so he knows how to be quarterback friendly. There is something to be said for that. It was just a matter of growing up, having the responsibility that he had here and understanding that and handling that. I think he has done phenomenal with it.”

Reid pointed out that Kelce has been voted a team captain every year that the Chiefs have been to the playoffs, a sign that he is respected by his teammates. But the two-time All-Pro is also respected by his peers across the league.

He’ll be headed to his fifth straight Pro Bowl after the season, assuming the Chiefs aren’t headed to the Super Bowl.

“He’s a great player. There’s a reason he’s been doing the things he’s been doing,” said Bears linebacker Kevin Pierre-Louis, who spent most of Sunday night chasing Kelce all over the field. “We just have a tremendous amount of respect for him.”