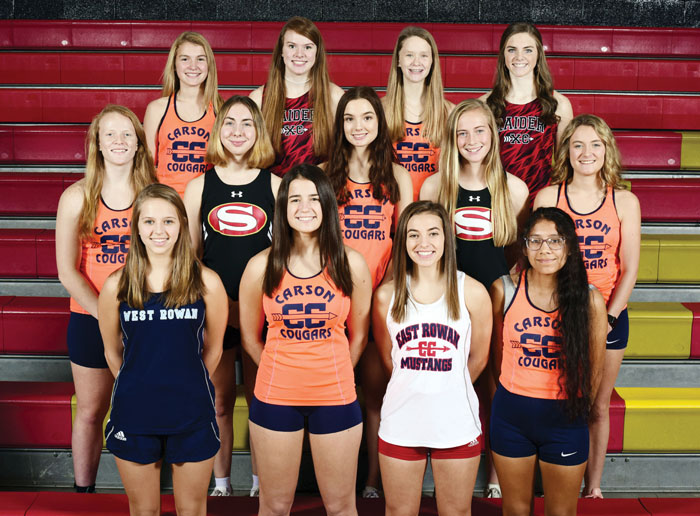 SALISBURY — It was Sept. 26, and not long after East Rowan senior Adalie Harrison won the Rowan County Championship race, Carson senior Taylor Conrad, the runner-up, went looking for her.

Not to slug her, but to hug her.

Some can’t handle losing, even if  “losing” means finishing second out of 200.

But there are still teen-agers who get it. There are still high school athletes who compete with every ounce of energy they possess, while remaining faithful to the highest standards of grace and sportsmanship.

Whether it was Harrison and Conrad  — or Conrad and Harrison — crossing the finish line in the girls cross country world this season, everyone kept their cool.

These are level-headed ladies. Their poise, as well as their level of conditioning, separate them from just about everyone else.

There was never any danger of Conrad tripping Harrison out in the woods or of taking a club to her knee, or vice versa.  They pushed and pushed and pushed each other over the course of a long season —  but they never shoved.

Their schools are fierce foes, about 10 miles part. Mustangs and Cougars scratch and claw in almost every sport. Harrison and Conrad were, by definition, rivals, but through it all, they became respectful enemies. Then they became friends.  That can happen through sports. That’s one of the best things sports can do.

Their first encounter was in middle school. Harrison was a standout for Erwin’s basketball team, while Conrad was the top player for Southeast.

“I remember knocking Adalie down, a bad foul, and helping her up, making sure she was all right,” Conrad said. “But in middle school, we barely knew each other. We got closer in high school.”

Harrison has always been basketball-first. She’s really good at it, the point guard and floor leader for an East team that has risen from nowhere to contention during the course of her career.  Quick and aggressive, she likely will be a 1,000-point scorer (she has more than 800 now) and she certainly will be a college player.

Conrad is harder to define. She’s poured her heart into athletics year-round for a long time. Cross country, basketball and soccer. She’s not flashy. She’s not that person piling up buckets or scoring goals, but she’s vital in all three sports for the Cougars. In basketball, she rebounds. In soccer, she defends. In cross country, she shows the way. In every sport, she’s a voice, a communicator.

Harrison burst on the local cross country scene by winning the pre-county meet in 2016 as a freshman. She placed third in the Rowan County Championship race later that season, crossing the line behind Carson’s Taylor Wiggins and Conrad.

Harrison’s promising running career was interrupted when she was a sophomore. She didn’t compete in the 2017 county meet. That one was won by South Rowan’s Madison Lowery, who now runs for Catawba. Conrad again was runner-up.

“I had a bad ankle injury and I just had to stop for a while,” Harrison said. “Then a bout with tendinitis.”

Harrison made a cross country comeback in 2018. She wasn’t 100 percent, but she has grit. She placed fourth in the Rowan County Championship race. That one was won by South Rowan freshman Bethany Rymer. Harrison edged Conrad, who finished fifth. Conrad collapsed at the finish line from dehydration, injury and illness, but she did finish.

Heading into this season, it figured to be Conrad’s time. She’d been county runner-up twice and she was the lead runner for the county’s strongest and deepest program.

“But I knew I couldn’t take anything for granted,” Conrad said. “I put in a lot of work over the summer.”

Harrison, as is always the case, didn’t spent much time on the trails during the hot months. She spent her summer working on hoops. Camps, drills and games. Basketball drives her.

Conrad, not surprisingly, got off to the quicker start, as the girls began their senior seasons. She won the pre-county meet in August, but Harrison stayed close. Conrad won by seven seconds.

“After that pre-county race, I realized my competition was Taylor, and I knew where I stood,” Harrison said.. “I knew I had to work to get where I wanted to be.”

Harrison had pushed herself too hard in training early in her career, and that likely contributed to her injury setbacks.

Harrison dealt with sickness for about three weeks in the middle of the 2019 season, but her ankles and knees held up.

In the Cabarrus vs. Rowan Meet held in mid-September, Harrison (second) and Conrad (fourth) were the top Rowan runners.

In the Rowan County Championships at Dan Nicholas Park on Sept, 26, Harrison ran 21:04 to beat Conrad by 25 seconds.

“I really wanted to win county — and I did it,” Harrison said.

Conrad logged the third runner-up finish of her career in the county meet and led Carson to the team championship. Team success put a smile on her face. A year earlier, Carson had finished second to South Rowan.

“Senior year is the last one,” Conrad said. “I just wanted to enjoy it. Adalie and I talked more than we ever had. We communicated more when we were away from the races. It was like, ‘How many miles did you run this week?’ Things like that. We tried to keep each other motivated for the next race.

On Oct. 9, in the United Way Invitational held in Newton, Conrad (10th) and Harrison (14th) excelled in a field of 98. They were separated by 16 seconds.

One of Conrad’s most important days of the season came on Oct. 16 at Salisbury Community Park — the North Piedmont Conference championship race.

There was no question North Iredell phenom Jonna Strange, who would later win the 3A state title, was going to take the event. The drama surrounded the expected duel for second and third between Conrad and Harrison.

Conrad had the advantage of running for a team that had a chance to win, and that’s powerful incentive. She took second. Harrison was third, 35 seconds behind her.

Carson had seven of the top 13 runners and took its second straight NPC team championship for coach Les-lee Ihme.

The NPC changed regionals in 2019, competing in Morganton in the 3A West Regional, after being moved from its normal spot in the Midwest.

“We just wanted to make sure we had fun with it all year, and it worked out for us,” Conrad said. “We made state. That was a major goal.”

In the 3A state race, Harrison and Conrad went head-to-head for the final time — at least on the cross country trail.

North Iredell’s Strange ran 17:57 to win the event.  Harrison and Conrad were well back of the leaders, but they posted solid times.

“The rivalry made us better people,” Harrison said.

The Post has chosen to recognize both girls as co-runners of the year. The hope is that it doesn’t detract from either, but instead turns a spotlight on their shared accomplishments. They battled in an under-appreciated sport, but they embraced competition in the finest possible way. Harrison and Conrad set a strong example for every athlete in every sport.

The next meeting for both girls could be in a semifinal in the upcoming basketball Christmas tournament. That will happen if East (10-0) and Carson (9-1) both advance past the first round.

Harrison said she plans to play soccer this spring, for the first time in high school, so maybe she and Conrad will collide a few times on the pitch, as well.

If someone gets knocked down, you can bet her rival will help her up.

The all-county team is based on the results of the Rowan County Championship race, although there was a twist.

Carson coach Les-lee Ihme brought it to the Post’s attention that one of Carson’s runners, senior Megan Deal, was not one of the Cougar runners competing in the varsity race (the limit is seven from each school), but ran a 23-flat time in the jayvee race that would have placed her 10th in the varsity race and on the 12-person all-county team.

It’s possible this has happened previously, as the county has featured deep programs in the past, teams with more than seven good runners. But this is the first time anyone’s made the appeal.

There really wasn’t much of an argument we could make against  it. Deal ran on the same course on the same day as everyone else. It didn’t matter much who she was running in front of. It was basically Deal against the Dan Nicholas Park course and the clock.

We didn’t go to the Supreme Court on it, but the most relevant precedent we could find was an East Rowan golfer in 2018 making the all-county team who was not one of East’s designated five scorers for the county tournament. She played as an individual. Her score couldn’t count for her team, but she did earn a spot on the all-county squad with a round that placed her among the county leaders.

So we have 13 girls on all-county this year. No one was subtracted or displaced. The top 12 finishers in the varsity race maintained their positions. Deal was added.