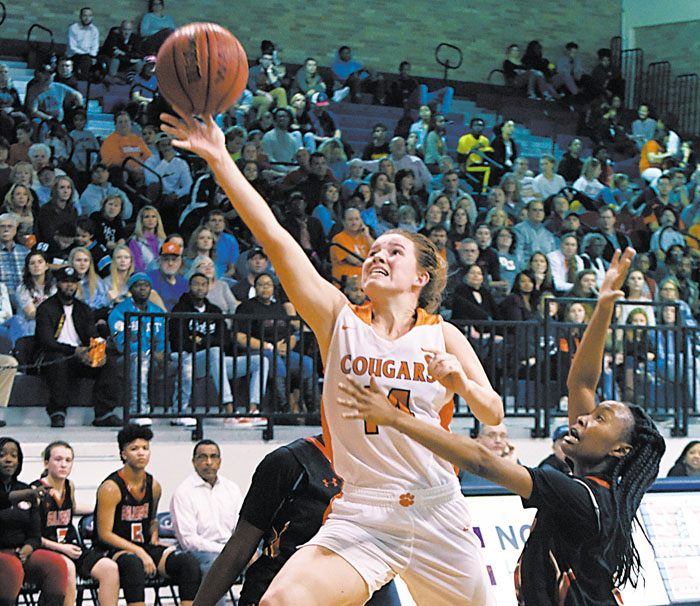 At least, it’s the 48th for the boys, who got started in 1971. Salisbury, coached by Bob Pharr, beat West Rowan in that first title game.

The tournament is named the Sam Moir Christmas Classic and is played on Sam Moir Court at Catawba College’s Goodman Gym. Moir, long-time men’s coach of the Catawba Indians, died at 94 in October, 2018.

The lead sponsor for the tournament is once again Dale’s Sporting Goods in China Grove. That sponsorship has helped keep this an affordable family event.  A three-day tournament pass costs just $20. An all-day pass is $8 — and that’s for eight games. That’s  hard to beat for hardcore hoops fans.

Twenty-four games will be played over a three-day period, with championship games scheduled for 6 p.m. (girls) and 8 p.m. on Saturday, the 28th.

Moir games generally stay on schedule. Officials generally let the teams go at it without an overload of whistles.

There’s always buzz and excitement about the tournament. This year is no exception.

The appearance of the very strong A.L. Brown boys (replacing North Stanly) strengthens that side of the tournament. A.L. Brown lost twice in the Carolina Challenge in Columbia, S.C., over the weekend, although they scored 90 in one of those losses. .At 6-2, they’re only seeded third, but most regard the Wonders as the favorite. They’ve beaten Carson twice and West Rowan once in the early going.

This is the 23rd season for A.L. Brown boys coach Shelwyn Klutz, but this will be his first time in the tournament. Klutz and West Rowan’s Mike Gurley took over at their schools in the same year.

Seeds, as is always the case, are based on pre-tournament records, not rankings, polls or opinions.

No one seriously believes that the Carson girls, 9-1 and the two-time defending champs, are the fourth-best team in this event, but they did lose a game (to 4A powerhouse North Mecklenburg).  Three teams are undefeated, so Carson is seeded fourth. That’s just how the Moir works.

East Rowan’s girls are the strongest they’ve been in quite a while and are seeded No. 1 based on a 10-0 record. East is obviously good, but the schedule has been pretty soft. East coach Kevin Holland acknowledges that while his team has come a long way and worked for the top seed, it isn’t the favorite. The Mustangs still have a lot to prove, but they’ll get their chance. To win this tournament, they’re going to have to beat two really strong teams.

West Rowan’s girls and Salisbury’s girls both come in at 7-0. The county ADs operate the tournament. They requested teams in the same conference not play each other in the first round of the tournament if that matchup could be avoided. That’s a new means of breaking a tie we haven’t had before. That’s why West’s girls are seeded second, and Salisbury third. That avoids a matchup of Central Carolina Conference teams Salisbury and No. 7 seed South Rowan in the opening round.  There was no coin flip.

While North Rowan got the No. 1 boys seed based on a 5-1 record, there was a deadlock for second between A.L. Brown and defending champion Davie County. They’re the only teams from their leagues in the tournament, so a coin flip was necessary. Davie won it — and got the No. 2 seed. Davie will take on No. 7 South Rowan, while A.L. Brown will play No. 6 Carson for the third time. If you haven’t seen Carson senior EJ Clark yet, this is your chance. The lefty scored 37 in his last outing before Christmas and is averaging 24.2 points per game.

Considering their schedule, Carson’s boys are a pretty solid 5-5. That record includes a double-overtime loss to Central Cabarrus and a win over No. 2 seed Davie.

A.L. Brown has size, speed and experience. Kheni Briggs is considered one of the state’s top sophomores.

As far as individual standouts on the girls side, West’s girls are getting a mind-boggling 28.4 points per game from UNC Asheville signee Abigail Wilson, who is marching toward 2,000 career points. She’d be the first in program history to reach that milestone.

Salisbury’s girls are led by 1,000-point scorer Anayia Fulson. The senior guard leads a young team with a lot of talent.

North Rowan’s girls haven’t beaten a county opponent in a long time, but that could change  at some point in this tournament. Fifth-seeded North (6-2) has talented young players in freshman Kamora Cannie and sophomore Hannah Wilkerson and obviously is one of the best teams in the 1A Yadkin Valley Conference Tournament.

East and Carson are both capable of putting five girls in double figures, and those are tough teams to beat.

On the boys side, there are  plenty of capable teams.

Sophomore Brandon White, who is almost 6-foot-10, is really coming on for North Rowan as a scorer, rebounder and shot-blocker. North can have shooting issues, but it compensates with size on the boards. The Cavaliers get second — and third — shots.

Brooks Johnson is the only returning starter for Davie’s defending champs, but the War Eagles have found talented new players to put around him.

Fifth-seeded West Rowan (4-2) is bigger, faster and more physical than it’s been in several years and should have a whale of a first-round game with Salisbury (4-2). That Salisbury-West tie (for fourth and fifth)  required a coin flip, but all it determined was who was the home team for Thursday’s finale.

East Rowan’s boys are seeded eighth, but they’ll be interesting to watch. Trey Ledbetter returned as head coach for East’s last game, and the Mustangs (1-9) had a chance against a tall Mount Pleasant team for about 28 minutes.

The action starts early Thursday (9 a.m.) with the Salisbury girls tangling with sixth-seeded A.L. Brown. A.L. Brown’s Jaliah Smoutherson scored 31 against Carson, so the Hornets will have to keep an eye on her.