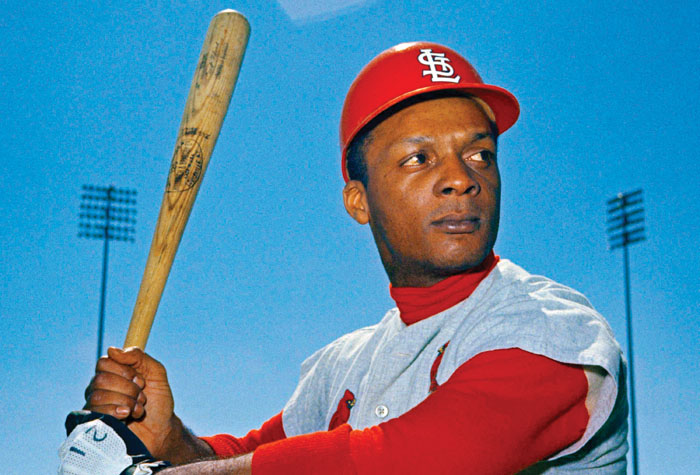 File-This 1968 file photo shows St. Louis Cardinals outfielder Curt Flood. Flood set off the free-agent revolution 50 years ago Tuesday, Dec. 24, 2019, with a 128-word letter to baseball Commissioner Bowie Kuhn, two paragraphs that pretty much ended the career of a World Series champion regarded as among the sport's stars but united a union behind his cause. (AP Photo/File)

NEW YORK (AP) — Curt Flood set off the free-agent revolution 50 years ago Tuesday with a 128-word letter to baseball Commissioner Bowie Kuhn, two paragraphs that pretty much ended the career of a World Series champion regarded as among the sport’s stars but united a union behind his cause.

St. Louis had traded the All-Star center fielder to Philadelphia just after the 1969 season. Flood broke with the sport’s culture of conformity and refused to accept the Cardinals’ right to deal him, becoming a pioneer and a pariah.

After weeks of discussions with the Major League Baseball Players Association, Flood began the union’s equivalent of Lexington and Concord, challenging the reserve clause in first shot of a labor war that would consume the sport for more than a quarter-century.

“After 12 years in the major leagues, I do not feel that I am a piece of property to be bought and sold irrespective of my wishes,” Flood wrote in his Dec. 24 missive. “I believe that any system which produces that result violates my basic rights as a citizen and is inconsistent with the laws of the United States and of the several states.

“It is my desire to play baseball in 1970 and I am capable of playing. I have received a contract offer from the Philadelphia club, but I believe I have the right to consider offers from other clubs before making any decisions. I, therefore, request that you make known to all the major league clubs my feelings in this matter, and advise them of my availability for the 1970 season.”

Flood and the union lost that fight in a lawsuit that went all the way the U.S. Supreme Court, but the union’s fight went on.

“If there had not been the person who was going to step out there and take the bullets, there wouldn’t have been anything,” Flood’s widow, the actress Judy Pace, said last weekend. “So he was the man who stepped out of the foxhole to go and challenge.”

The reserve clause was struck down in 1975 by arbitrator Peter Seitz in the case of pitchers Andy Messersmith and Dave McNally, and it took eight work stoppages from 1972 through 1995 to achieve long-term labor peace.

Flood, a .293 career hitter, was long gone from the field by then. After sitting out the 1970 season, he had 40 more plate appearances in 1970 for Washington and told the Senators he was retiring via telegraph sent from John F. Kennedy Airport in New York en route to Spain. His only further employment with a major league team before his death from throat cancer in 1997 would be as an Oakland Athletics radio broadcaster for part of the 1978 season.

“All the groundwork was laid for the people who came after me. The Supreme Court decided not to give it to me, so they gave it to two white guys,” Flood once said. “I think that’s what they were waiting for.”

Baseball’s average major league salary has risen from just under $25,000 at the time of Flood’s letter to just over $4 million this year, an escalation testament to the power of free agency. When Gerrit Cole signed his $324 million, nine-year contract with the New York Yankees last week, the pitcher paid tribute to Flood and to Marvin Miller, the transformative union head finally elected to baseball’s Hall of Fame on Dec. 9.

“Challenging the reserve clause was essential to the blossoming sport we have today,” Cole said, later adding: “I just think it’s so important that players know the other sacrifices that players made in order to keep the integrity of the game where it is, and so I hope everybody has that conversation about Curt Flood on the bus.”

The National League adopted a reserve clause binding a player to his team in December 1879. Since 1947, paragraph 10 (a) of every Uniform Player’s Contract stated the club could renew the existing contract “for the period of one year on the same terms.” Teams claimed the renewed contract also could be renewed under that provision.

Flood was a teammate of future major league stars Frank Robinson and Vada Pinson at McClymonds High School in West Oakland, California. He signed with Cincinnati for $4,000, appeared in just eight games for the Reds over the 1956 and ‘57 seasons and was traded to St. Louis. He played for the Cardinals’ World Series champions in 1964 and ‘67, becoming a three-time All-Star and winner of seven straight Gold Gloves. His salary rose to $90,000.

On Oct. 8. 1969, St. Louis traded the 31-year-old outfielder with Tim McCarver, Joe Hoerner and Byron Browne to Philadelphia for Dick Allen, Jerry Johnson and Cookie Rojas. Flood issued a statement saying: “If I were younger, I certainly would certainly enjoy playing for Philadelphia. But under the circumstances I have decided to retire from organized baseball, effective today, and remain in St. Louis where I can devote full time to my business interests.”

Flood conferred with his lawyer, Allan Zerman, and met with Miller and union general counsel Dick Moss the following month for four hours over lunch at the Summit Hotel in New York and discussed plans for a lawsuit against Kuhn, the AL and NL, both league presidents and the 24 clubs. The union retained former Supreme Court Justice Arthur Goldberg to represent Flood.

When the union executive board met Dec. 13 at the Sheraton Hotel in San Juan, Puerto Rico, it voted 25-0 to give Flood the union’s support and pay his legal expenses, a group that included future Hall of Famers Roberto Clemente, Reggie Jackson, Brooks Robinson, Joe Torre and Jim Bunning.

Los Angeles Dodgers catcher Tom Haller asked Flood whether race was a factor in his decision.

“I think the change in black consciousness in recent years has made me more sensitive to injustice in every area of my life,” Miller quoted Flood as saying in the union leader’s 1991 book, a “Whole Different Ball Game.” “But I want you to know that what I’m doing here I’m doing as a ballplayer. … I think it’s absolutely terrible that we have stood by and watched this situation go on for so many years and never pulled together to do anything about it.”

Flood sent his letter to Kuhn on Dec. 24. Kuhn wrote back Dec. 30 and released both letters.

“I certainly agree with you that you, as a human being, are not a piece of property to be bought and sold. That is fundamental in our society and I think obvious,” he wrote. “However, I cannot see its applicability to the situation at hand.”

Flood sued on Jan. 16 in federal court in Manhattan, claiming antitrust violations and involuntary servitude, among other allegations. The trial lasted from May 19 through June 10 and witnesses included Jackie Robinson and Hank Greenberg.

“Since baseball remains exempt from the antitrust laws unless and until the Supreme Court or Congress holds to the contrary, we have no basis for proceeding to the underlying question of whether baseball’s reserve system would or would not be deemed reasonable if it were in fact subject to antitrust regulation,” U.S. District Judge Irving Ben Cooper wrote on Aug. 12.

The 2nd U.S. Circuit Court of Appeals unanimously affirmed on April 7, 1971, in a decision by Judges Sterry Waterman, Leonard Moore and Wilfred Feinberg.

Flood was traded from the Phillies to Washington in November 1970, hit .200 with two RBIs in 13 games for the Senators in 1971 and failed to show up for an April 26 game against Minnesota. He sent team owner Bob Short a telegram that said “a year and a half is too much. Very serious personal problems mounting every day.”

His case went on, and the Supreme Court ruled 5-3 against Flood on June 19, 1972. Justice Harry Blackmun refused to overturn the prior Supreme Court decisions in 1922 and 1953 that baseball was not interstate commerce.

“If there is any inconsistency or illogic in all this, it is an inconsistency and illogic of long standing that is to be remedied by the Congress, and not by this Court,” Blackmun wrote.

Seitz ruled three years later in the Messersmith-McNally case that the renewal applied for one year only. The current system of free agency after six years of Major League Service was agreed to on July 12, 1976, and the salary surge began.

“He did draw that line in the sand,” current union head Tony Clark said of Flood. “If he hadn’t been willing to do that. I think all of our histories change in our sport and others.”