White noise: Are these squirrels in Spencer, Salisbury from the North Pole? 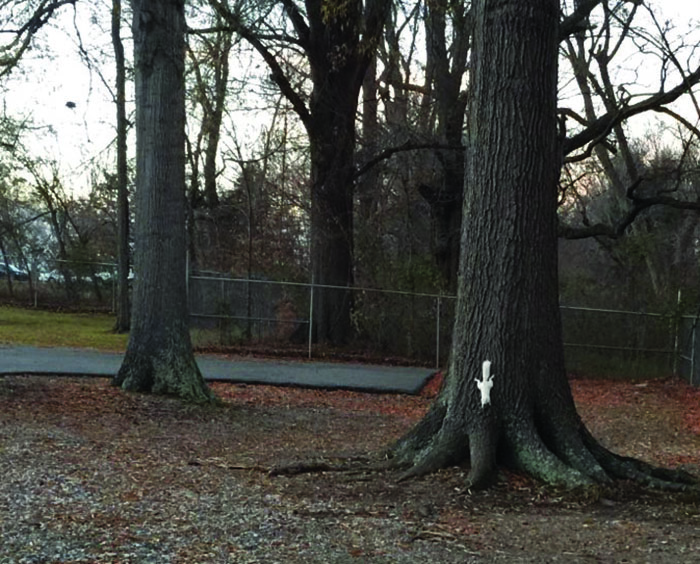 Photo courtesy of Karen Maddrey Karen Maddry, office manager at Lutheran Services Carolinas, took this photo of a white squirrel in 2017, when it was seen in the parking lot. Employees have called the white squirrel (or squirrels) names such as Trinity, Snowflake and Blizzard.

SALISBURY — Don’t worry about whether or not we’ll have a white Christmas. It’s already here.

Consider it more of a fascination than a craze, but for several years now, folks in particular areas of Salisbury and Spencer have marveled at something most of us have never seen — white squirrels.

On the occasions they spy one — or two — they’re apt to take pictures or videos. Over time, they’ve even allocated names to the white critters.

This is not a rumor. This is not an April Fool’s joke in December. These white squirrels are real, so Merry Christmas.

Cybil Jones calls the white squirrel she frequently sees in Spencer around Pickett Avenue and 17th Street “Penelope.” Her family has seen Penelope for about two years now, usually in the area around Spencer Woods.

“This morning, my son Judah wondered if she was sent from the North Pole,” Jones said Friday. “She just may be, or at least hopped a train to Spencer.”

Just this past week, Guy Hoskins looked into his back yard off Beauregard Drive in Spencer and noticed the white squirrel he and his wife, LeeAnna like to call “Whitey.”

Who knows, Whitey also could be Penelope, but Hoskins saw the opportunity to take a 3-minute video and send a couple pictures to LeeAnna, who was on a business trip.

“I think it’s a ‘he,'” Guy Hoskins said, “because he’s out there chasing a gray squirrel.”

The couple have seen this white squirrel (or others) in their back yard, along 17th Street and during walks in nearby Spencer Woods. “We’ve had two,” Guy said. “I don’t know if we still have two, but I’ve seen them together.”

Jessica Cortez took a video of a white squirrel in her Spencer back yard and posted it on social media, with a meme that said it was driving her dog crazy.

Winfred Mention lives in this same area of Spencer. He took video of a white squirrel near the corner of 10th Street and South Spencer Avenue. His young grandson, Vito, enjoyed watching from a window as the white squirrel romped.

But wait — there have been white squirrel sightings miles away in Salisbury. Employees at Lutheran Services Carolinas on South Martin Luther King Jr. Avenue have a white squirrel that frolicks in their parking lot.

Office manager Karen Maddry reports they have seen him or her for at least three years.

“It just hangs out in our parking lot,” confirmed Katie Scarvey, LSC’s director of communications, who took a video of the white squirrel scurrying through puddles and criss-crossing a tree this past week. “I don’t know if it’s one or more than one. You think it’s one, but you really don’t know.”

Donna Lyerly also has captured photographs of the squirrel, whose nicknames around LCS have included “Snowflake,” “Trinity” and “Blizzard.”

At this juncture, it should be mentioned I own a pair of white squirrel socks. I purchased them this past summer during a vacation trip to the mountain hamlet of Brevard, which happens to be devoted to white squirrels.

The town has a big white squirrel statue on its square and the White Squirrel Boutique on one of its corners, specializing in everything white squirrelly.

The mast arms for the Brevard traffic lights have white squirrels on them that, I think, light up at night, and the town has as an annual White Squirrel Festival.

Back in 1986, Brevard made itself a squirrel sanctuary, mainly to protect its abundance of white squirrels.

I happened to note these various things in a recent column I wrote for Salisbury the Magazine. Thanks to the Transylvania Times, I also included some back story to the town’s fascination with white squirrels.

It all started with the animal truck of a traveling carnival in Florida.

“According to Brevard resident Mrs. W.E. Mull,” the Times reported many years ago, “a pair of white squirrels were given to her brother-in-law, H.H. Mull, by Mr. Black of Madison, Florida, in 1949.

“A carnival truck had overturned near Black’s home and the squirrels were caught by Mr. Black when he observed them playing in his pecan grove.

“Mull gave the critters to his niece, Barbara, who unsuccessfully tried to breed them. In 1951, she married and left home. Eventually, one of the white squirrels escaped and Mr. Mull soon let the other one go. Before long, the squirrels began breeding in the wild and appeared in several areas of town.”

For the record, my wife and I did not see any white squirrels in Brevard, though we spent some time looking for them.

And I have not seen the white squirrels here, except in the videos and pictures that have come to me since that first column appeared and I had mentioned hearing rumors of white squirrels in Spencer.

“Thought I’d let you know that white squirrels are not just a rumor in Spencer,” Cortez said in an email. “They are real.”

In providing visual evidence, as did Cortez, LeeAnna Hoskins wrote, “It is not a rumor!”

The white squirrel umbrella in Rowan County apparently has covered an area wider in the past than Spencer and Salisbury.

Robin Rogers, who works for the Salisbury Police Department, said she had white squirrels frequent her yard when she lived off Old 80 in Granite Quarry from 2002-2007.

The first time she saw one, she mistook the white squirrel for a white rabbit.

“It would come often in my yard because we had several pecan trees, so, of course, it loved the yard,” Rogers said. “Then, as the weeks went on, maybe two to three more. Only that one was really white. The others were white with brownish places.”

Rogers stresses that she had witnesses to her sightings, including her husband, daughter and parents.

“So I am not making this up,” she added. “They are real and quite pretty.”

Rogers has moved to Rockwell, where she reports no white squirrel activity.

It turns out Brevard has a White Squirrel Research Institute, where Robert Glesener is the director of research.

Laura Moss of the Mother Nature Network reported once that “certain cities and towns are known for their large population of white squirrels, including Brevard, North Carolina; Marionville, Missouri; Olney, Illinois; Kenton, Tennessee; and Exeter, Ontario.

“But your odds of seeing a white squirrel are higher in Brevard. Glesener’s research has found that almost one in three of the city’s squirrels has white fur, meaning it has the highest percent white of any known squirrel colony.”

White squirrels are considered genetic color variants of the eastern grey squirrel. From all appearances, the white squirrels seen in Spencer and Salisbury are not albinos (white coats with pink or red eyes).

Instead, the ones around here have all-white coats and dark eyes, which make them something called leucistic.

This all begs the question Scarvey had last week:

Let’s get back to you on that. Meanwhile, may all your Christmases be squirrelly.