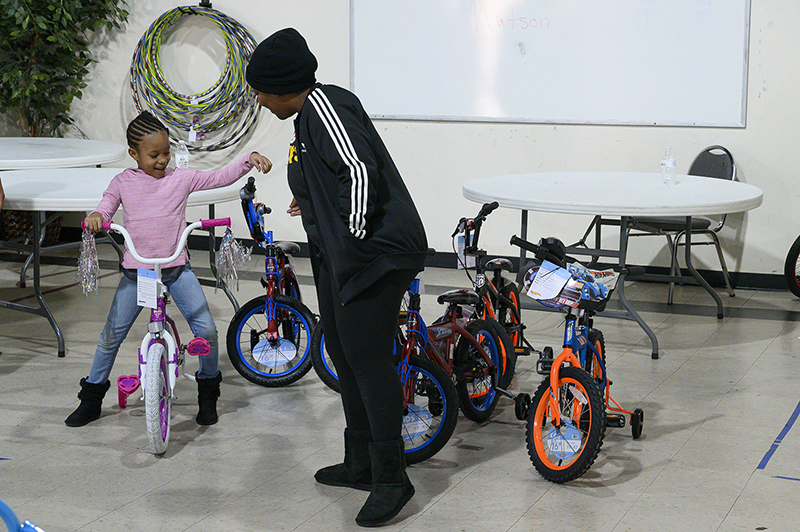 The town should organize a parade for the North Rowan High School graduate who claims East Spencer as his hometown, Foxx told Bates.

But this year he chose his hometown’s school.

“He chose bikes because he felt like it would have a bigger impact and, hopefully, get kids back outside,” said Angelica McClure, Hargrave’s assistant and foundation manager.

The school’s enrollment director, Courtney Sawyer, said the bikes also served as a reward because the school met expected growth in the state’s 2018-2019 school performance grades. Sawyer provided information about the age and sex of students to McClure and, on Saturday, students chose their favorite bike on a first-come, first-served basis.

One of those students was Adaliya King, who was clad in pink and walked straight to a pink bicycle at the back of the room with her grandfather Grover Garrison. King’s grin stretched from ear to ear as she rode the bike out of the school and to Garrison’s car.

Tina Foxx Wallace, the school’s board chairwoman, told the Post that Essie Mae Kiser Foxx Charter School wants to be the center of the community of East Spencer and that community partners like Hargrave’s foundation help the school with its mission.

Wallace said she was proud that the school received a certificate from the state recently for meeting its expected growth.

The school also provided 30 turkeys and food to the neediest of families with enrolled students Saturday.

Essie Mae, located at 720 N. Long St. in East Spencer, is the only school located in the town. It opened in August 2018, serving students in kindergarten through fourth grade. It plans to eventually become a K-8 school.

White noise: Are these squirrels in Spencer, Salisbury from…