SALISBURY — South Main Book Co. has a new owner for the new year.

Alissa Redmond has bought the business from Wendy Alexander-Persse, who bought what had been Literary Bookpost in 2016. She changed the store’s name to reflect a new start.

Redmond has no plans to change the name, or much else, for that matter, until she has a good feel for the community and what it wants and needs.

“I want to learn the business and the community and then think about changes.” 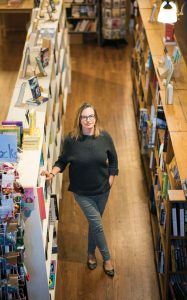 Redmond has worked for the U.S. State Department and is actually on an extended sabbatical. She and her 4-year-old daughter, Margaret, had to leave Bolivia recently due to political unrest.

“I was looking for a house to buy in Salisbury,” she said, “to be closer to family.” Her brother lives in Charlotte and her parents in Clinton.

While she was looking for real estate, she came across the sale of the bookstore.

“If I could have hand-picked anyone, it would have been her,” Alexander-Persse said.

“We’re very different and that’s what the store needs. I’ll miss it, especially the kids, but when it’s in good hands, that makes it easier.”

Redmond has many different experiences — she was a volunteer in the Peace Corps before working for the State Department. She has lived in New Orleans, after Katrina, India, Afghanistan, Hong Kong and Bolivia, among other places. She adopted her daughter in Hong Kong, and will adopt another daughter in March 2020, Tin Yan, 9.

She needed a home base in order to finalize her second daughter’s adoption. Once she saw the store for sale, she talked to Alexander-Persse and to the Rowan County Chamber of Commerce which helped her contact other people in the community about what was going on and what was coming up.

“It fits with my family, then fit more — I can bring the girls here — my older daughter is learning English and this is a great place to learn.”

She has joined the Chamber and has made connections at Livingstone College. “With the colleges here and the symphony I knew people would be here as customers.”

“Great people have been friends of the store and they still will be,” she said.

Alexander-Persse has introduced her around. And when Redmond started meeting women who had adopted children, she felt like she would have a strong support base to raise her daughters.

Alexander-Persse had some interest from others about the store, including some local people, but that was as far as it went. “I stopped thinking about it,” and then Redmond came along.

Redmond might add new signage. She wants to maintain and improve the children’s area; she’d like to have more events, such as author signings.

She’s thinking of adding programs on Friday nights or Saturdays, perhaps collaborating with Salisbury Wine Shop. She’d like to have regular children’s programs, like Saturday readings. “I love that mezzanine and can picture a couple people playing music up there.”

She wants to be flexible on the store hours, think about opening some on Sundays, or being open later.

She’s interested in promoting and working with literacy programs. She has taught English as a Second Language and has worked with non-government agencies on literacy and wants to use those connections to help others. She has contacted the Rowan Literacy Council, as well.

First, she’s going to learn more about Rowan County by taking the history class in 2020, and she’s going to go to the American Booksellers Association’s winter conference in January in Baltimore.

For the time being, she’s decompressing from her years of travel and working on the adoption process.

Her background is in community development, so she’s going to learn the retail side of the business. She plans to be at the store most of the time, then may call on some former assistants to help out.

Having a home feels good. She wants to put down roots for her girls and she feels safer here. Daughter Margaret will be at First United Methodist pre-school. She hopes Tin Yan will be able to go into third grade. They are living in the historic district, “so I have no commute.”

“This is one of the most beautiful bookstores I’ve seen in my life.”