At 84, Misenheimer says Nazareth was driving force In her life

Former Resident Gives Back As Supporter, Board Member
By Mike Smith, msmith@prrelevant.com

ROCKWELL – Sue Misenheimer was just 12 years old when she first walked on to the campus of Nazareth Children’s Home. It quickly became her forever home.

And we mean forever home. Seventy-three years later she sits on the board of directors for Nazareth Child & Family Connection and is a regular visitor to the campus that underwent a name change several years ago. 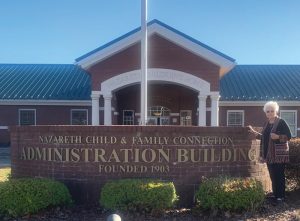 She, two brothers and a sister arrived in the summer of 1948 after the death of both parents over a 15-month period. She stayed until she graduated from Rockwell High School in 1952. Her three siblings all spent most of their childhoods at Nazareth.

It was their home, their family.

“I feel really fortunate to have lived here and I’m really appreciative of all that I got because it taught me everything,” Misenheimer said on a recent afternoon during a visit to the Nazareth campus.

“This is my home. When I first left (after high school graduation), my brother and sister were here, so I’d come back. And then I would come back and see whoever else I knew. Then I started working with the alumni for Fun Fest every summer. I’ve kept in touch with all my friends that I knew here, and I still do.”

Misenheimer’s mother died when she was 10 years old leaving her father with four children to raise. Fifteen months later the father died in a traumatic saw-mill accident. The children were doled out to aunts and uncles, a fact of life that didn’t sit well with the children. A happenstance visit from an insurance salesman though, helped the family reunite at Nazareth.

“One day an insurance salesman came by the house where I stayed, and of course when he knocked on the door, I answered. He said, ‘who do we have here?’ My aunt explained the situation to him, and he said, ‘I know just the place for you’ and explained about Nazareth to us.”

About a month later the four siblings were reunited at Nazareth, a family unit again.

“I don’t ever remember being nervous about coming here because I really wanted to come,” said Misenheimer, who remembers that there were about 50 residents living on campus when she arrived. “The reason I wanted to come was so I could have my brothers and sisters all tighter together with me.

“I remember lying in the bed that first night thinking ‘I wonder how this is going to be?’ When you come into something like this, it’s a big adjustment. I do remember getting homesick when I went to visit family. I was homesick for Nazareth. I do remember that. I don’t remember a single bad day where I wanted to go home.”

At the time the younger girls lived dormitory style, six to a room on the second floor of a building that housed the cafeteria on the first floor.

“We had 12 tables in the dining room and with staff and children we about had all those tables full most of the time because everybody came to eat together,” she remembers.

Residents had to help earn their keep, with housekeeping and farm chores being split between girls and boys.

“Oh, honey let me tell you about the chores. We had four crews (in her dormitory) four people on each shift. We had a cooking crew, a crew to set up tables and clean the dining room, we had a washing and ironing crew and the other was cleaning the hallways.

“The boys had to milk the cows and bring the milk up to the girls. And, of course we had to strain the milk and get it in the refrigerator and then we churned and made butter.”

Back-to-school shopping was a little different then for Misenheimer and the other residents.

“Now when we got ready for new clothes, we had a room that people would bring things in,” she remembered. “We would go to the hand-me-down closet and find something to wear … a new dress or whatever.

“When it came time for shoes, we went up to the shoe store in Salisbury on a bus. We’d all sit in a row (to try on shoes). We’d get two pair of shoes, one in the spring and one in the fall.”

Misenheimer graduated from Rockwell High School in the spring of 1952. A few days later, while visiting an aunt in China Grove, she got a call from Nazareth’s superintendent Thomas Moose.

“He called and wanted to know if I wanted to go to work. I said ‘yes, but where am I going?’ He had gotten me a job at Sunbeam Bakery in Salisbury. I was the secretary to the president. He said I didn’t need to interview. That was on a Wednesday and I had to be there Friday.”

She went back to Nazareth that day and packed her belongings. Twenty-four hours later Moose drove her to Salisbury.

“He took me to Salisbury to live with a girl that he had left there the year before. He didn’t even take my chest in the house. He just set it on the front porch and said, ‘here’s where you are going to be living.’ He gave me five dollars and said that would be enough until I got paid.”

Unbeknownst to Moose or the folks at Sunbeam, Misenheimer had applied for a job at a bank in Salisbury before graduation. Three months later the bank offered her a job.

“Working at a bank was what I really wanted to do. I hated to tell them at Sunbeam. They didn’t want me to leave. I don’t think I ever did convince them I wasn’t coming back. I went to work at the bank and stayed in banking the rest of my life.”

It was a busy year for Misenheimer. High school graduation in the spring, two new jobs by the fall and in December of 1952 she married her high school sweetheart Marvin Misenheimer. “We had the exact same GPA when we graduated,” she recalled with a smile.

They had two boys, Mark and Mike, who both remain in the area. Marvin passed away in 2010.

She started as a bookkeeper at the bank in the fall of 1952 but was destined for much more in the banking industry. When she retired more than 30 years later after her youngest son graduated from college, she was a loan officer and the secretary of the bank’s board of directors.

Misenheimer’s retirement hasn’t really been a retirement. It’s been a life filled with family, friends and community service.

“I stay really busy. I’m never at home. People say they can’t ever find me home. Right now, I’ve taken on something new. I’m volunteering for hospice and visiting hospice patients in addition to my work at the church and with the board at Nazareth.”

And it is Nazareth, she says, that has been the key to a life of fulfilment.

“I owe everything to Nazareth. That’s where I was disciplined and learned to do the things I did,” she said. “When I left, I knew how to cook, and I knew how to clean and take care of a household. I was also taught how to work with others. When I went to work, it wasn’t hard for me to work with people, because I had always been around people.

“I feel really fortunate to have lived at Nazareth. And I’m really appreciative of all that I got because it taught me everything.” 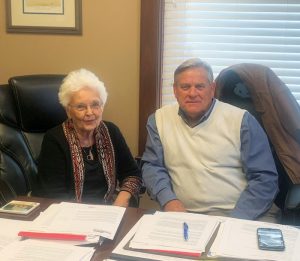