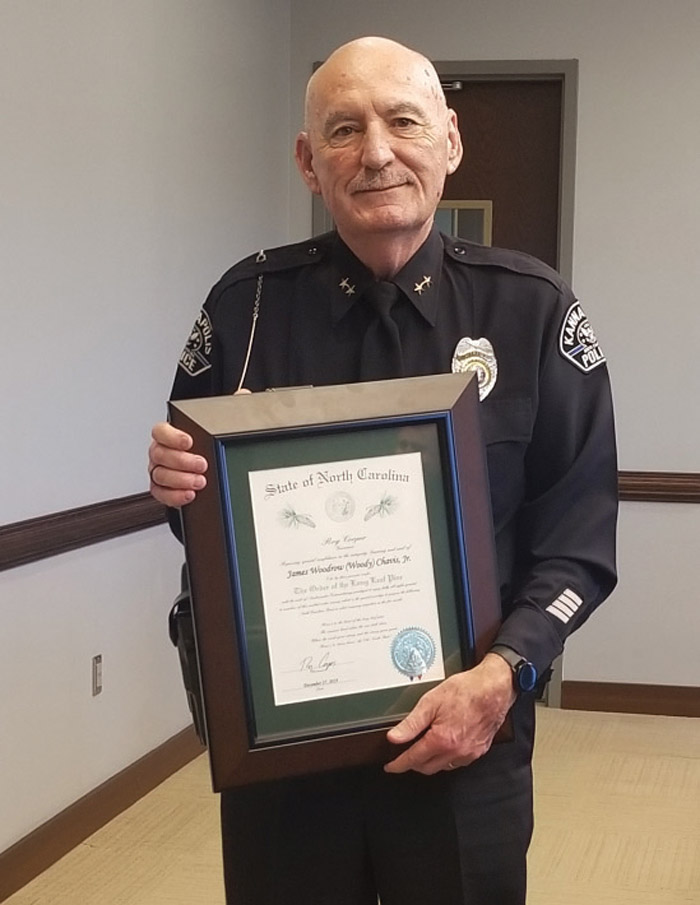 The Office of the Governor of North Carolina selects the recipients of the award. An application with nomination letters and other criteria must be met in order to receive the honor.

One of the requirements is 30 years of service to the state. Chavis has served as a police officer for 37 years. Chavis will retire from his position on December 27.

A native of Kannapolis, Woody says his childhood dream was to be a police officer. “I can remember being a small child and walking downtown with my mother. I would always stop and talk to any police officer. I knew at that age, that being a police officer, was all I wanted to do,” he said.

“I have never regretted my decision to be a police officer. I have accomplished my childhood dream and much more by being able to serve as police chief of Kannapolis for 12 years.”

He graduated from A.L. Brown and joined the U.S. Army where he served as a military police officer in Germany. After leaving the Army there were no openings in the Kannapolis Police Department so he worked at the mill in the tin shop and was a volunteer firefighter.

But Woody still wanted to pursue his goal of becoming a police officer, so he earned associate degrees in law enforcement, industrial safety, security and health management from Central Piedmont Community College and attended Pfeiffer University. In 1983 he was offered a position as a patrol officer with the Kannapolis Police Department. At that time the Kannapolis Police Department was part of the Cabarrus County Sherriff’s Department because the City was not incorporated yet. He was given a hand-me-down 38 revolver, a hand-me-down uniform and a used Mercury Zephyr.

Woody was named Chief of Police in 2007.

“Chief Chavis has been a critically important stabilizing influence in our Police Department  during a period of major growth and transition in our City,” said City Manager Mike Legg.  “I could not be prouder of Woody and his dedicated service to our community for nearly four decades.  His presence will certainly be missed but I am also very happy for him. His retirement is well deserved.”

He has received many honors including being named Outstanding Young Law Enforcement Officer by the Kannapolis Jaycees; Unit Commendation Award – Honor Guard Division; Unit Commendation Award – Criminal Investigation Division; Robert Eury Memorial Service Award, Chief’s Award for Exceptional Service, Rowan Optimist Paul W. Wilson Memorial Award, Life Saving Award, Outstanding Law Enforcement Award from the Mothers of Murdered Offspring.
He has seen many things change in policing and the City since the 1980s. The department has tripled in size and become more diverse. The City was incorporated, and the Kannapolis Police Department became a stand-alone organization. Policies and procedures were put in place and equipment and technology instituted and maintained to help police officers do their jobs better. He led the effort to achieve national accreditation of the police department a status maintained today.

But one thing has been consistent. “We have a reputation for professionalism, for hiring good people who are good officers, for doing things right, for never compromising our values and for being accountable to ourselves and others if we do make mistakes,” Woody commented. “And I am most proud of this reputation. It is who we are as a police organization. We are a family who serves the families of Kannapolis.”

He credits this reputation as one of the reasons the police officers have good relationships with the many diverse people in the community. “We have worked diligently to build and maintain relationships with everyone. It helps us be pro-active in preventing crimes and solve them quickly if they do happen because people talk to us. The people of Kannapolis do not want crime and they help us every day which is one of the reasons we have a low crime rate.”

When asked about what other things he is most proud of Woody said, “I have never had to shoot my weapon. Again, by building relationships and having a reputation of no tolerance for certain behaviors criminals know that if you come to Kannapolis and commit a crime you will be arrested, and we are going to ensure our case is solid and you will do time.”

For anyone who wants to have a career in law enforcement Woody encourages them to do so. “Being a police officer is about helping people. If you do not understand that one fact you will not be a successful officer. You must want to help people. It’s not riding around in a car. It’s about getting out and walking and having conversations with everyone. You must understand many times you are meeting people on the worst days of their lives – whether they are the criminal, or the victim and it is important to treat everyone with respect,” Woody said.

“It’s going to be hard to walk away from policing but its time for me to retire, play more golf and have time with my family.”