Power in Partnership speaker calls crowd to find their passion 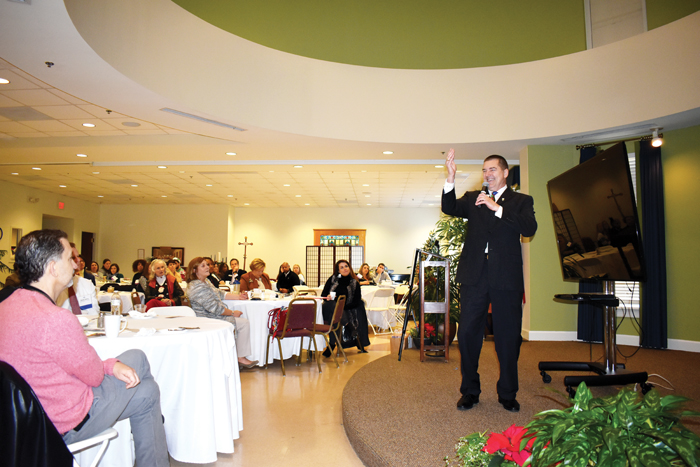 David Haynes speaks at the Power in Partnership breakfast Thursday morning at Trinity Oaks. He talked on “Finding Your Way” detailing how he found his passion serving seniors.

SALISBURY — David Haynes was asked a question in 2008: “What’s your passion?”

He had no answer for the 24-year-old woman, Jessica, who asked the question and had already for her passion. But he found his answer three years later and shared his story to a large audience at Thursday morning’s Rowan Chamber Power in Partnership at Trinity Oaks.

Years ago, Haynes was touring a hospital in which one of the stops was the neonatal intensive care unit. On the wall — called “the wall of hope” — were handprints and footprints with names and dates of birth. One stuck out; it said 7 ounces, the weight of a baby girl at her birth.

Haynes got the opportunity to meet that baby 24 years later. That girl, Jessica, was working at the same hospital she spent the first 16 months of her life. At just 8 years old, Jessica decided she wanted to be a nurse.

Jessica told Haynes she enjoyed spending time with the young moms and dads, encouraging them.

“‘I cry with them. I sing with them. I pray with them. I hug them. I am just there, and that’s the greatest part of my job, and if this is all I ever do for the rest of my career, this is my passion. I will feel like my life is important,’” Haynes said, recalled his conversation. “Then she looked up at me. ‘David, what’s your passion?’”

He found his answer in 2011 when he and his wife made a decision to move his wife’s 90-year-old dad to assisted living. One visit, a CNA asked his father-in-law if he wanted to go to the balloon toss. The residents and CNA tossed the balloons for 35 minutes.

Haynes said he sat on the side of the wall with his $1,000 suit and cellphone “acting all good and important.”

It hit him as he looked at his father-in-law and the other residents, he said.

“I thought, ‘I wonder why God is allowing these people to live with all this pain and things they don’t even understand,’” Haynes said. “Then it hits me. He’s not finished with him yet. They still have a purpose.”

Haynes asked himself: what was he doing with his life. He took his jacket off, tucked his tie into his shirt and joined the balloon toss.

On the way home, he stopped in the neighbor’s driveway. He was shaking. On Thursday, he compared it to the Grinch when he is on the mountaintop with his dog and looking down on the village singing.

“I really felt I had been changed from what I saw with that little circle with the residents,” Haynes said. “And then it hit me. I got the answer for that little nurse’s question she asked me three years ago. What’s your passion? Serving seniors.”

He also told the audience that he arrived early to the breakfast event and ended up in the wrong building.

But he spoke to three seniors — Cindy, Leon and Randy — while in that wrong building. And when he made his way to the right spot, Haynes recalled thinking to himself, “If this event right here was canceled and I had to go back home, the 15 minutes I just spent with this lady and her two friends that was worth the drive.”

For those still looking, passion can be found, Haynes said.

“What is your passion?” Haynes asked. “If you have not found it or if you haven’t even thought about it, I hope these next few days going into the new year you will. You can find it on this very campus right outside these doors. There’s opportunities to serve.”

Michael Walden, N.C. State profession and economist, will be the speaker of Jan. 16 Power in Partnership breakfast. He will talk on the 2020 economic outlook.