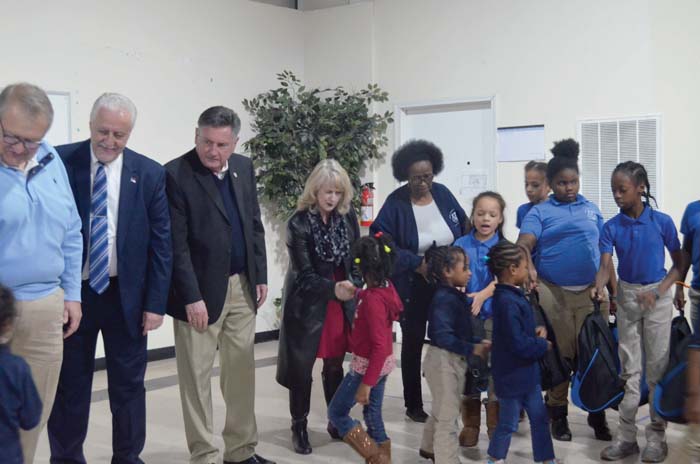 A group of students at the Essie Mae Kiser Foxx Charter School receive a handshake and backpacks of love from older students during a Thursday presentation at the East Spencer school. A number of donors came together to provide items for the children before the holidays. Shown are Rowan County Commissioner Craig Pierce, center, and his wife, Melissa, who were instrumental in getting the bags together. In addition shown are Rowan Sheriff Kevin Auten, left, and Senator Carl Ford. Shavonne Walker/Salisbury Post

EAST SPENCER — Rowan County Commissioner Craig Pierce often talked with the late Essie Mae Kiser Foxx about her work in the East Spencer community and her passion for helping children.

On Thursday, Pierce and his wife Melissa along with a host of other local and state representatives showed a little love to students at the charter school that bears Foxx’s name.

Pierce and his wife have given scholarships in the past to high school students, but the commissioner said they wanted to do something for the elementary-age students. He connected with other businesses, organizations and individuals in the community who were able to donate items for backpacks for each student. More than 100 students received backpacks.

The backpacks, which organizers called ‘backpacks of love,’ were filled with five pair of Under Armour socks, fruit, paper, lip balm and snacks. Pierce said everyone involved wanted the students to know they were appreciated and important to the community.

“Mrs. Foxx would’ve been so happy. So impressed. She would’ve been grinning from ear-to-ear, am I right?” asked state Sen. Carl Ford.

The children clapped and screamed as Pierce began telling them some of the items they would find inside the backpacks.

He said all of the blue bags were embroidered with the school’s name and logo on it as a way to signify that they were “all one unit.”

This year, the school started its first student government association and elected its first board. Student Government President Trinity Frink, 10, said the students knew they’d be receiving a gift but didn’t know what they would receive.

Vice President Elyria Leonard, 10, said it was nice of everyone who gave them gifts.

“Because they didn’t have to give us anything,” Trinity said.

Board Chairwoman Tina Wallace also announced that the school received a certificate from the N.C. Department of Public Instruction for achieving the goal of expected academic progress for students for the 2018-19 school year. The school achieved and exceeded expected academic growth.

“Our goal is to be the center of the community.”

“We are very proud of them,” said Latisha Feamster, director of operations.

Feamster said the school acknowledges and welcomes the community support.

“We are a small school but one that is growing and thriving in science, technology, engineering and math,” she said.

Feamster said the certification recognizes that the school has shown progress in the 2018-19 school year — “growth in grades and learning.”