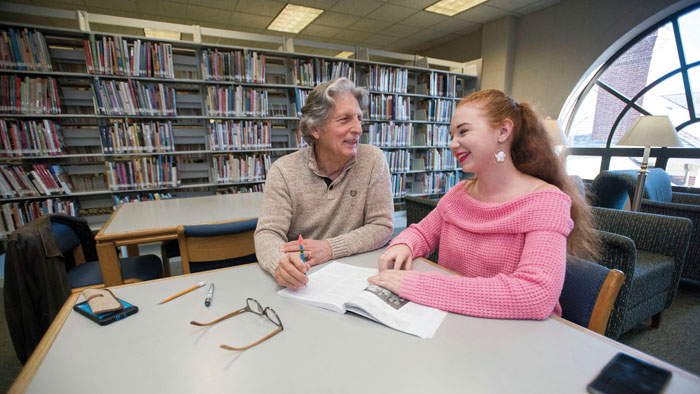 JON C. LAKEY/SALISBURY POST Don Doering, a tutor with the Rowan County Literacy Council, works with Marina Ladigina at the Rowan Public Library. After two years of study, the Ukraine native will head to basic training with the Army and hopes to serve as a linguist or translator.

SALISBURY — With only a third-grade level of English, Marina Ladigina moved here in August 2017.

But after years of work, she’s now up to a 10th-grade level, has passed necessary military tests and is headed to Army basic training on Jan. 28.

Ladigina came from Ukraine with her mother and her younger sister after she finished high school. She knew how to speak Ukrainian, Russian and some Mandarin. That September, Ladigina and her mother began with the Literacy Council to learn English with tutor Don Doering.

“I started working with her and her mother initially two days a week for an hour-and-a-half each session,” Doering said. “It became very clear, very soon Marina was very intelligent, had a plan for her life and very driven.”

Ladigina worked hard learning English. Along with the Literacy Council session, she went to the community college to participate in their English program. The work paid off. The 19-year-old, who works at Romano’s, got her driver’s license after taking the test in English, only realizing later there was a Russian test.

“At the beginning, thank God for Google translation,” Doering said. “She and her mother had that on her phone, and I had it on my phone because of that, mostly working with Spanish speakers. When it came to Ukrainian, that Cyrillic alphabet, it got challenging.”

Ladigina compared Ukrainian to English, saying the language’s pronunciation rules can be tough to figure out.

“In my language, when you see a letter, you read a letter, it’s always the same,” Ladigina said. “‘A’ will always be ‘A.’ In English, you see a letter; you have to think five times: how do you say it? My favorite example is the Pacific Ocean. The letter ‘C’ you read three different ways.”

She still struggles sometimes with finding the right words and knows she will never completely master English or any language. But she watches movies and TV shows to help when she isn’t in tutoring classes.

“I can never finish studying any of the languages because I know some Ukrainian words I never heard,” Ladigina said. “The same with anybody with any language. You cannot know a whole language. There are some words that you’ll never know.”

But Ladigina’s understanding of English wasn’t the only thing that changed about her. She was shy and overwhelmed with the new environment when she first moved to the U.S. She now is outgoing, dynamic and intelligent.

And she’s got a plan for life.

She wants to join the military and go to college with the help of the G.I. Bill. She also wants to get her citizenship.

Ladigina passed necessary military tests this month. After leaving for Army basic training in January, Ladigina will go to school for pharmacy training, a goal she had since the eighth grade. She also has a plan to travel the world and write about her experience.

Doering says he’s a tutor with the Literacy Council but his and the agency’s guidance goes further,

“We’re not just teaching people to read and understand English,” he said. “We’re guidance counselors. We’re coaches. We’re helping folks with citizenship, with legal questions that they’ve got — just navigating all the ins and outs of getting along in this country.”

Doering helped her with the military entrance exam, and also told her what to expect in the military, since he had served.

“I talked her about how this is going to be a life-changing experience,” Doering said. “It’s going to change the way you look at yourself and a team.”

“I want to see her after basic training of how my little girl has changed, because there will be a change,” Doering said. “I’m excited for her to see where it goes.”

He considers Ladigina his granddaughter.

“I have a warm spot in my heart for all my students, for all my English speaking students, because they are just such dynamic, wonderful, hardworking people,” he said. “I jokingly tell her that I think of myself of more of her grandfather.”

As Ladigina goes off to the Army, Doering has one request: “You darn well better keep in contact.”